On Friday, February 5, 1841, a wealthy farmer from Sussex named Henry Dendy, his wife Sarah, their five-year-old son and two servants, passengers of frigate ship, York reached Hobson’s Bay in Melbourne. On that day, by any standard, he was the most fortunate man in Melbourne. He sailed all the way from England to claim the land that rightfully was his. He had acquired in England a ‘Special Survey’ from the Commissioner for Land and Emigration, the right to select 5120 acres (or eight square miles) of land, virtually of his choosing in the Colony. He paid £5120, for the land, that is £1 an acre. Melbourne was booming and lands adjoining Melbourne were bringing at auction sales £20, £30, and £60 an acre. Dendy’s was the first and last land order issued in London for the alienation of Victorian lands. Dendy also persuaded his farm workers to join him in Australia later, to share in his fortunes.

Henry Dendy was the only son of a rich farmer named Samuel Dendy and when Samuel Dendy died on 13th August 1838, his landed estate comprised of four farms – Little Millfield, in Rudgwick; the Frenches, in Wotton; and lands in Wallis Wood, in Abinger were passed on to Henry. The only knowledge Henry Dendy had about Australia was though Explorer Major Thomas Mitchell’s published books on Australia Felix.

In 1840, the British Government fixed the sale price of lands in Port Phillip District at £1 an acre and made it possible to buy land from London for which certificates were given that have to be honoured by authorities in Sydney. Dendy sold all his four farms and paid £5,120 at the Colonial Lands and Emigration office in London and received in return, a special land order for 5120 acres of land at Port Phillip.

After arriving in Melbourne Henry Dendy wasted no time presenting his order to superintendent of Port Phillip, C.J. La Trobe. La Trobe needed sanction from Governor of NSW, Sir George Gipps. A month’s waiting time was required for the overland mailman to ride to Sydney and return to Melbourne. By then Dendy was approached by land speculators in Melbourne and was offered £50,000 for his rights under the order. But the value of his land rights probably was worth twice that amount in Melbourne on those days.

Dendy’s right to claim 5000 acres of land anywhere in Melbourne alarmed the NSW Governor and he was left with no choice but to restrain Dendy’s freedom to choose his land. Sir Gipps immediately promulgated a regulation which affirmed that no land already surveyed was available for selection and also that no land whether surveyed or not within a radius of five miles of Melbourne, was to be alienated under land orders.

Dendy enlisted the services of businessman Jonathan Binns Were as manager, to find a suitable acreage. J.B. Were later became his business partner.  Were who had arrived in Melbourne in 1839, had already established as successful merchants and agents for shipping and land deals. Meanwhile Dendy and Were vigorously pushed for land sanctions at Williamstown and Heidelberg, the Government gave an option to choose land at Brighton which was outside the five- mile radius.

Dendy was sanctioned an oblong block of land two miles in length and four miles in width which extended the beach frontage on the west to East Boundary road on the east.

Dendy planned to settle his Sussex immigrants whom he persuaded to emigrate to Australia, in his farm land. A private township, where he will be the squire, living in a mansion at the centre of it. Dendy paid a surveyor named Henry Boorn Foot to survey and plot the land into a private township called Waterville. But his wife Sarah persuaded him to change the name to Brighton. He also designated the responsibility of settling newly arrived immigrants in his new estate to Mr Foot.  On 31st August 1841, a vessel Strathfieldsaye anchored at Port Phillip bay with 259 immigrants aboard and four families agreed to settle in Brighton. They were the families of George Patrick, William Hall, Joseph Manchester, and Thomas Newman, who became the first settlers in Brighton. The new immigrants erected temporary tents and used them until they built their huts in the land. Dendy came later with his wife and child, and occupied a cottage of three rooms, at the corner of New and Park streets, constructed for him by two emigrants, Ricketts and Stephens. Dendy and Were also began selling land allotments for construction of villas at the seafront. Dendy built a two storey mansion called ‘Brighton Park’ for himself which was known as the Manor House.

All of Dendy’s money was locked up in mortgaged Brighton lands and when Dendy’s immigrants from Sussex arrived in June 1842 in the barque Earl of Durham, he was left with no money and was in deep financial stress. By then, to meet his daily expenses he had already sold 100 acres of unmortgaged land for £30. Dendy personally visited the newly arrived immigrants at Earl of Durham and informed them of his pathetic situation and conveyed to them that they must fend for themselves.

Melbourne was experiencing a reversal of fortunes by 1842, the boom had ended and once sky rocketed land prices started spiralling down. In 1844, deep in trouble, Dendy transferred a half share of his estate to Were for £3000. But the money had to come from sale of land which they were unable to sell due to the changed conditions. Jonathan Were’s business was also in trouble and Dendy decided to stand guarantee for Were for a sum of £1500 to secure Were’s business debts. By doing so he put himself in an unrecoverable position. When he was called to honour his guarantee of £1500 on a bank loan to Were, he was unable to do so and in April 1845 Dendy was declared insolvent. Dendy’s big dreams ended by 1844, just three years after his ambitious arrival in Melbourne.  His estate was seized under an order of sequestration by the Union Bank. He lost everything under his name and fortunately the ‘Manor’ house was saved having previously settled this property on his wife on the basis of her investment of a £400 dowry in the Special Survey order. 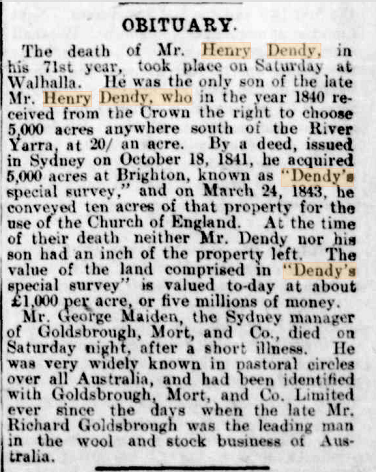 Dendy resumed his life at Geelong as a Brewer attempting to recover what he lost. His financial troubles forced him to sell his Brighton Property in 1848. He tried squatting at Christmas Hills from 1849 to 55 and in Upper Moira until 1855. From Moira he relocated to a sheep property in Werribee then started a flour mill in Eltham. In 1867, he sold the floor mill and went to Gippsland and invested in a mining company, Thomas River Copper Mine. That was the final blow and Dendy lost all his savings. In his final days he was living with his son in Walhalla, who drove engine at Long Tunnel Gold mine. On 11th February 1881 Dendy died and was buried at the Walhalla Cemetery along with his dreams to make it big in Australia. His death notice in “The Argus” contained the well- deserved tribute, “An old colonist, sad, above all, an honest man.”