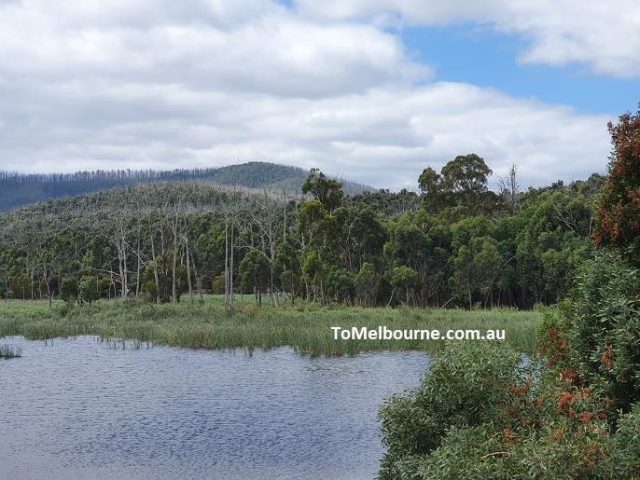 Toorourrong Reservoir is situated 40km north of Melbourne CBD near the township of Whittlesea. The name ‘Toorourrong’ came from the Kulin language and means, ‘’Laughing Kookaburra’’.  The dam is an earth fill embankment with puddled clay core and was completed in 1885, with a capacity of 159 mega litres. The dam has a height of  8.9metres and length of 260metres.

The Plenty River rises from the slopes of Mount Disappointment in the Great Dividing Range approximately 50 kilometres north of Melbourne. Plenty Range catchment area, which is a supply protection area is around 351 square kilometres. Water is also diverted to the Plenty River from the King Parrot Creek catchment (Silver and Wallaby Creeks) over the dividing ridge and into Toorourrong Reservoir. The dam is operated by Melbourne Water and the reservoir forms part of the Melbourne water supply system. Water from the Toorourrong Reservoir flows by aqueduct to the Yan Yean Reservoir, which is located 9km south of it.

Yan Yean Reservoir and Toorourrong Reservoirs are fed by Plenty River Catchment System, which passes through forests, pasture, and grazing land to reach the Whittlesea township. Of the 157,000 hectares reserved for harvesting water for Melbourne’s water supply, the City of Whittlesea is home to around8000 hectares of closed water supply catchments. The Reservoir is located within the Kinglake National Park.

The 12-hectare Toorourrong reservoir park is a popular spot for picnic and is located just four kilometres northeast of Whittlesea township.  It is located at the base of Mount Disappointment in the Kinglake Ranges. The Park has lookout points and interpretive boards describing the story of the reservoir. There are toilets, BBQ facilities and picnic tables. This is a beautiful scenic area with ornamental trees in lawn with views across water to the hills.

After the devastating bushfires of 2009, the park has been renovated and redesigned. The heritage rotunda, the only structure that survived the bushfire has been restored and located at the entrance of the car park.

Car Parking is provided along a sealed path from picnic area. All ability access is provided throughout the park including accessible toilets and an all-abilities access ramp from the main carpark.

In 2011, Toorourrong Reservoir Park was chosen as a site for memorial by the City of Whittlesea Bushfire Memorial Working Group for the 2009 Black Saturday Bushfires. The Black Saturday fires burned most of the vegetation and damaged almost all of park infrastructure with only the rotunda remaining.  After the bushfire calamity, the park was reopened in 2012. The place of remembrance is dedicated to 35 community members from Whittlesea and surrounds whose lives were lost. The open seed pod design of the memorial represents the hard native tree seeds that propagate only after intense wildfires.

The historic reservoir wall didn’t meet modern dam safety standards and in 2010, Melbourne Water commenced planning and works to increase the size and height of the earthen embarkment and building a concrete wave wall on top. The overall height of the wall was raised by 2.4metres and base of the wall extended out to twice its original width in some sections. Due to these works the original lily pond was largely filled in. The burrow pit created by these works left a large hole in the ground – which is where the current lily pond is located.

No rubbish bin provided so please take your rubbish with you.

Dogs are allowed but must be on leash

All Native plants and animals are protected.

No camping and no generators.

Stay clear of the intake towers, spillways and weirs

Do not start fires.

After the establishment of Melbourne in 1835, the increase in population especially after gold was found in the 1850’s in Victoria, the quality of water supply became an issue. Yan Yean water supply system was constructed from 1853 to 1857 to enable gravity fed supply system. But the water supply was plagued with issues of water quality and quantity since the beginnings. To address the issue, a reservoir was constructed in 1864 near Preston to regulate supply pressure of the water to the city. The system was also extended north of the Yan Yean Reservoir to harvest water from Wallaby Creek, Jacks Creek and Silver Creek.

A second reservoir was constructed in 1886 which came to be known as Toorourrong Reservoir. The purpose was to allow sediment from these sources to settle before water was passed to Yan Yean Reservoir through clear water channel aqueduct, avoiding polluted section of the Plenty River. This was done under the supervision of William Thwaites. Thwaites redirected Wallaby and Silver Creeks along granite lined channels that wound around the contours of the mountains through a weir at Wallaby Creek, to the holding reservoir at Toorourrong. The highlight of the system was the eye-catching structure known as ‘The Cascades’, which was from the local granite, and sited amidst a dense grove of giant tree ferns. From Toorourrong, where the water had settled sufficiently to stabilise flowed to the Yan Yean Reservoir.

Toorourrong Reservoir complex is of technological significance for the quality of the stonework in the stone lines spillway and the channels associated with the reservoir. Toorourrong Reservoir Park as part of the Wallaby Creek designated water supply catchment area, was added to Kinglake national park in December 1995.

Toorourrong Reservoir had a carer’s cottage from the beginning. The original cottage was replaced in the 1920’s and the second cottage was lost to 2009 fires. The caretaker was kept busy, checking the water depth and health of the reservoir, cleaning and maintaining the park and the channel, cutting firebreaks and lawns, chopping and stacking firewoods for many BBQs. In 1995 after the resident caretaker position was abolished, the cottage was taken over by Australian Platypus Conservancy. The group was interested in studying and protecting the Platypus living at the reservoir. They vacated the cottage in 2007.

The Bushland around the reservoir pose an annual threat of forest fire during summer. One of the worst recorded was on 7th February 2009, The Black Saturday. Black Saturday fires resulted in Australia’s highest-ever loss of human life from a bushfire, with 173 fatalities. A memorial park was opened at the reservoir in 2005 in remembrance of the local people who lost their lives in the fire. It is located at the Lily Pond, within the park.

Interesting facts collected from information boards around the reservoir

This water system remains one of Melbourne’s greatest engineering feats. Around 200,000km of piping was laid to supply Melbourne with Fresh water in the 1850’s to 70’s. Three horses were needed to drag one large pipe from Melbourne in 1857 to build the first reservoir Yan Yean. These powerful horses pulled pipes as wide as 76cm along a roughly hewn tramway built next to the pipe track. The pipes ran down Nicholson Street, past the Carlton Gardens, up St Georges Road to Plenty Road and on to Yan Yean Reservoir located 8km from Toorourrong Reservoir. Toorourrong Reservoir built 30 years later formed another innovative arm to the Yan Yean Water System.

In 1859, Melbourne imposed water restrictions. The reports in Argus Newspaper claimed that men were prostrate like beasts, drinking from a puddle in the streets in hot weather. The Board of Lands and works blamed Melbournians, in particular those that watered gardens every evening, for this was an extensive use and sometimes shameless waste of water. Restrictions with penalties were introduced in 1875. Taps were not to be fitted in gardens where hose could be attached. The penalty was to have the water cut off forcing that household to use communal hydrants.

In year 1881, Melbourne had a population of 283,000 people. Yan Yean was at capacity and the water was always dirty. “At the restaurants in town, I have seen animalcules alive in the glasses’’, Reported the Argus Newspaper in 1858. Desperate for more and cleaner water, an innovative scheme was devised to harvest from the surrounding hills and creeks north of Great Dividing Range. It was a massive undertaking that require kilometres of aqueducts, several weirs and an artificial waterfall. The eastern branch of Plenty River was dammed to create Toorourrong Reservoir into which water poured. Here it sat allowing sediments to settle before flowing into the clearwater channel and onto the Yan Yean Reservoir.

1300 people worked at the Wallaby Creek aqueduct, which was built to channel water to Toorourrong Reservoir from north of Great Dividing Range. Axemen cleared the dense mountain scrub, quarry men cut the rock, dressers men shaped the stone blocks for the aqueducts and hundreds transported stone, trees, soil and supplies up and down the slopes. Contracted to be finished by September 1882, the hilly terrain and changeable weather made conditions so unpleasant that keeping workers were impossible and the aqueduct was finished almost a year late.

4 weirs were built to harvest water from Silver Creek. After successfully diverting water from Wallaby Creek into Toorourrong Reservoir, an addition was made to collect even more water from further north. Four weirs were built into Silver Creek each one diverting and regulating waterflow. The water then flowed through a tunnel cut beneath the mountain peak, then out along the Silver Creek aqueduct before pouring into Wallaby Creek Weir. When completed in 1886, the increase of water delivered to Toorourrong Reservoir was about 22.7 Megalitres per day.