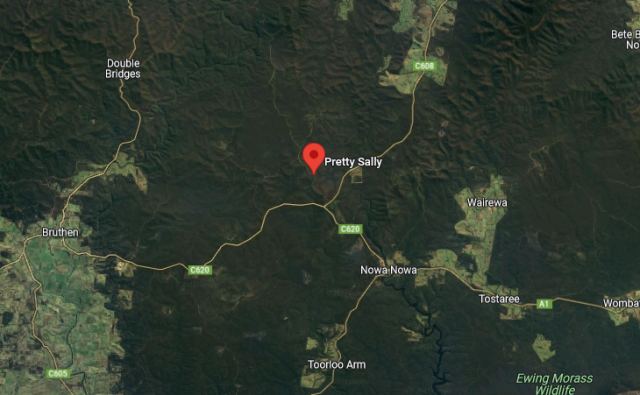 Pretty Sally or Pretty Sally Hill is located between Wallan and Kilmore. This volcanic cone situated 530 metres above sea level was known as Big Hill and the original road to Sydney ran near its peak in the early days of the European settlement of Melbourne.

The hill got its name from a lady named, Sally Smith who operated an illegal shanty and an eating house near the Big Hill in the 1840s. Not much is known about her life but her tragic death on 8th September was reported on 10th September 1847 by ‘The Melbourne Argus’. It is as follows, ‘’An accident occurred near Beveridge’s swamp, on Wednesday last, which I am informed is likely to be attended with fatal results, Mrs Smith, better known as pretty Sally was driving a Spring cart; one of the wheels of the vehicle coming in contact with a stump caused a capsize, when by some unaccountable means Mrs Smith fell under the vehicle, which being alone seriously crushed her before she was released. The writings of those years describe her as a twenty stone woman.

A little bit of information on what happened to her shanty after her death could be derived from a report appeared on 22nd May 1850 in The Argus, titled ‘Seymour’ by their special correspondent. It goes as follows, ‘’After refreshing and taking a comfortable rest, commenced the ascend of the Big Hill, in the full assurance of finding a house of entertainment, about half way over, which existed some 15 months previously under the auspices of ‘’Pretty Sally’’, but what was my chagrin to be informed that the present proprietor Mr Budds, didn’t combine such a mode of augmenting his income with his agriculture and diary pursuits, there was, therefore, no alternative left me but to make the best of my way to Kilmore, distant about 13 miles.’’ At the end of the report it mentions Pretty Sally once again, ‘’Touching the passage of the Big Hill, there is no place, between Melbourne and Sydney, which calls so much for a house of entertainment, as upon the site formerly occupied by ‘’Pretty Sally’’ and it is generally understood that the Squatting License was originally granted in that locality upon the express understanding that, such an establishment should be kept up.’’

The prominence of Pretty Sally’s Hill remained, since the route of Old Sydney Road which was proclaimed on 13th August 1848 passed through the foot of the hill. It was difficult to climb the hill in a bullock cart and many considered it as Hill of difficulty. In most cases the wheels of the bullock drays ploughed into the loam of sand at the highest point of the road. On 1st July 1925, Sydney Road was renamed as North Eastern Highway and on 17th October 1928, it was renamed again as Hume Highway.

After the arrival of motor cars, Pretty Sally’s Hill became an accident hotspot. Every now and then newspapers carried reports of accidents there. The news headlines itself are self-explanatory.

Motored The World. But Pretty Sally Proved His Waterloo

DANGEROUS ROAD Pretty Sally Hill to Be Made Safer

In 1958 a climbing lane was constructed on long grades at Pretty Sally to tackle the accident issue. Craigieburn ‘Hume By-pass Road’ was opened in January 1962 bypassing Pretty Sally. This bypass itself was bypassed by the M31 Hume Freeway bypass, opened in 2007.  The same year VicRoads re-declared the Old North Eastern Highway as Northern Highway which ended in Echuca.

Though not pretty by any standards, the lady who lived at Big Hill, her illegal shanty, and her tragic death form part of the memory lane for history enthusiasts. Her need to survive and the great silence and isolation of those years experienced by early settlers of Melbourne would definitely sprinkle at least an iota of sadness on the passer-by with empathy.