Mia Mia, a grazing village situated 120km north of Melbourne CBD, may look insignificant as a central Victorian town, if not for its tryst with many historic events. One such event was 1853’s Gold escort robbery which made headlines across Australian colonies for its uniqueness. Gold was found just two years before in Victoria and presented a historic opportunity for common men to get rich quick. Some worked hard at the diggings to make a fortune, but others just focused on robbing the fruit of labour of the fortunate ones.

East of today’s Heathcote was the McIvor diggings. On 20 July 1853, a cart containing 2223 ounces of Gold then valued over £8000, and about £700 in cash packed up in two boxes were heading towards Kyneton to catch the official Bendigo escort to Melbourne. A strong body of private escort under the charge of Superintend Robert warner oversaw its protection. Sergeant George Duins, Driver James Fookes, troopers Samuel Bencham Davis, Davis Beswater, and John Morton made up the rest of the crew. The troopers were armed with a sword, carbine, and pistols each, and the superintendent and sergeant having six barrelled revolvers in addition; the cart driver the only unarmed one. Duins rode ahead of the cart and others followed alongside or behind the cart.

When the escort reached Mia Mia, a recently fallen tree was lying across the road. On seeing it, Duins who was riding ahead shouted, ‘Halt’ to the rest of the cavalcade. Several armed raiders made a sudden appearance from behind the bushes and poured a volley into the escort. Driver Fookes, Troopers Davis Beswater, and Morton were seriously wounded, and fell from their saddles. The sergeant immediately forced his horse through the barricade formed by the lopped branches of the tree and was met by-another volley from the robbers. He was not hit, though his horse was, returned the fire, as  did Superintendent Warner, but didn’t offer necessary resistance to ward off the robbers. While they were maintaining their defence, half a dozen of the robbers proceeded to unload the cart of its treasure and then removed themselves to an adjoining dense stoney scrub. The rest of the bushrangers followed them. Fookes, Davis Beswater, and Morton who were seriously wounded in the initial volley of shots could not offer any help in defence.

Though Duins’s horse received three bullets in his back, it was still riding, and Mr. Warner at once despatched him to a Government station, three miles off, for assistance. Warner followed the robbers into the scrub and fired at them but missed the target. Duins returned with reinforcement troopers and several diggers he met on the way, all armed and furnished with horses.

The news spread like wildfire and as many as 400 diggers and others turned out in pursuit of the bush rangers scouring in every direction. Many were arrested on suspicion including a man who came to help the injured troopers but tried to misguide them in tracing the bushrangers. Government offered a reward of £500 for arrest and conviction of each offender and the punts at the crossings of the Goulburn and Murray rivers were kept under constant surveillance.

Police was in the dark without any clue about the whereabouts of the Robbers. The bush rangers disappeared into the bush and the evidence left by them were leading nowhere. But the God’s hand of help came from an unexpected corner.

At 2pm on 20th July 1853, a criminal report reached the office where J. Tucker was working as a Detective stating that McIvor private gold escort had been stuck up by six armed men. About this time a young man living on Collingwood Flat reported that a Colt’s revolver belonged to him had been stolen out of his tent. He suspected a young fellow living in the next tent to him. A search warrant was procured to search his tent and Police proceeded to execute the warrant. All evidence pointed that the suspect had already left but on the earthen floor lay a printed paper.  It was a dietary scale of the ship Madagascar, which was anchored on Hobsons Bay. On the paper it was scrawled with pencil, ‘’J. Francis, Cabin Passenger’’.  The detectives headed to Schooner Madagascar in search of J. Francis. The two brothers Joseph and George Francis were at Madagascar planning to leave for England. The booty of George and Joseph Francis were in two suitcases in George’s cabin. When Police came for arresting Joseph Francis, he thought it was about the McIvor robbery, so he went to his brother’s cabin broke open the box and went on deck. He told George Wilson, an accomplice in the robbery to remove the gold from his brothers into his cabin as his cabin had already been searched by the Police.

Joseph Francis’s room was searched, and the missing revolver capped and loaded was found with him; he was apprehended but discharged after two days. But a clue police received resulted in the search of George Francis’s cabin. George Francis was taken into custody. He was also carrying a bank draft for a very big amount. In a sea chest in his cabin was a large bag of Gold dust. Since the Detectives had samples of McIvor gold dust in their office, they didn’t have any doubt about the source of it. During interrogation George Francis confessed to the police and revealed the name of others. He told police there were 12 of them and gave whereabouts of ten of them. The names given were of John Francis, Joe Grey, Bob Harding, George Elston, William Atkins, George Melville, George Wilson and two others with names not known to him.

Trooper Samuel Davis in his testimony also mentioned that there were more than six robbers.

This account of Tuckwell was published by Argus fifty years later so many inaccuracies have creeped in and we have corrected some of it, comparing with the details given during the court proceedings.   The ship Madagascar soon left Australian shores, never to be seen again. We intend to publish the intriguing and interesting story of the Ship Madagascar for our readers, sometime later.

on12th of August, Captain McMahon, Chief Inspector of Police, enticed George Francis to become an approver offering a free pardon, a passage out of the colony, and £500. Taking lead from George Francis’s account of events, police arrested John Francis once again from  his cottage in Collingwood. John Francis later became Queens Witness.  Soon afterwards at a wayside inn, George Francis managed to get a razor and committed suicide. George Wilson was arrested from the ship Madagascar. A complaint was already lodged against him for creating disturbances and flaunting a pistol in Schooner Madagascar. Whilst he was being rowed ashore, he requested that boat might pass under the stern of another vessel, ‘’The Cullooney’’, which was on the point of sailing for Mauritius as he wanted to ask an acquaintance named Melville to take care of his wife.

Chief Detective Ashley, with Sergeant Simcock and Detective Murray on board the barque Collooney, took Melville in custody finding in his luggage, two bags of sovereigns containing £403,10s and a reticule containing  £720 pounds. Atkins was arrested at the house of John Harris, Hay and Corn dealer at Little Bourke Street for the possession of a bank draft for £400. In an adjoining room they found Atken’s wife Agnes Atkens with £81 10s in gold in a parcel in her pocket.  The police found sewed to the lining of her cloth a draft on the Sydney Branch of the Bank of New South Wales, in favour of Agnes McLachlan for £700. Agnes Atken was charged as an accessory.  George Melville was arrested from North Star Hotel. Found on him was £100 10s. in gold, silver, and notes, a silver watch and guard, a six-barrel revolver, and an American gold dollar.

The leader of the gang, Grey was never caught and alleged to have gone to South Australia.

According to the testimony given by John Francis at the court, after the ambush, the bush rangers rode to the dense part of the river Campaspe, threw their guns into the water keeping only pistols. They travelled around 7miles through the country that day and camped in the bush. The next day, after dividing the Gold, they resumed their journey. Passed the second night by a river’s side on Mollison’s run and continued in the same direction always keeping the bush and avoiding the road. The next night they passed in the bush near Kilmore. On Sunday morning each went their own way. George Francis stayed in the McIvor District and the other four returned to Melbourne through different routes, getting rid of their gold, preparing to leave the colony at first opportunity. Atkins, George Wilson, George Francis and John Francis reached John’s Collingwood Flat Cottage in Melbourne on Sunday night but separately. Atken left for McIvor to fetch his wife. Melville planned to go to Mauritius in Schooner Collooney.  The leader of the gang, Joseph Grey chose his own way saying he is heading for Adelaide.

At the court Police maintained that there is no case against Agnes Atken and then as to the prisoners, McEvoy, Elston and Harding that there was not a particle of proof against them.

As a reward for his treachery to his companions, Francis was reprieved, but the other three were sentenced to death. When receiving sentence, Melville made a savage attack on the informer, but was checked by order of the judge, who advised him “to divest his mind of malice and prepare himself for the death that awaited him.”

“Then may God forgive me,” he said, “as I forgive John Francis!”

Three of the bushrangers George Melville, George Wilson and William Atkins were hanged in Melbourne Gaol on 3 October 1853 within 16 days of conviction. Agnes Atkins was released, along with McEvoy, Elston and Harding. Francis and his wife were given a free passage out of the colony and are believed to have gone to the Cape of Good Hope.

NB: This account of McIvor Gold Escort Robbery is not prepared from Police records but from the newspaper reports of that time. We found many discrepancies and conflicting information, but we did our best to present the most accurate part of it here. This should not be used for research work. 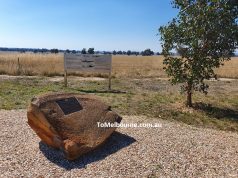