The Loch Ard Gorge is around 3 hours’ drive from Melbourne along the Great Ocean Road, situated at the  Port Campbell National Park. It takes about three minutes’ drive from The Twelve Apostles to reach Loch Ard George. Thousands of people visit here every year for its pristine beauty. But a century ago, this was one of the most dreaded coasts for sailors and is part of the Shipwreck coast.

The gorge is named after the clipper ship Loch Ard, which ran aground on nearby Muttonbird Island on 1 June 1878 approaching the end of a three-month journey from England to Melbourne. This is also the place that entered Australia’s history books for the bravery of a young man who rescued a 19 year old girl who lost 8 members of her family in the tragedy. 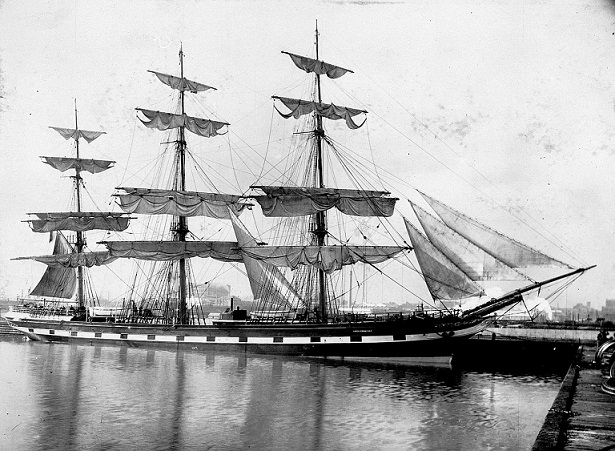 Thomas Richard Pearce was an apprentice on board the Loch Ard, an iron ship of 1623 tons, belonging to Aitken, Lilburn and Co. of Glasgow. Ship was bound from London to Melbourne, with 52 people on board. Only two people survived. Thomas Pearce, a midshipman of nineteen years of age and Miss Eva Carmichael of the same age. The Loch Ard had been a ship of disasters. Before her final voyage, she had five captains, four of whom were dead.

The ship wrecked at the sea margin of H.H. Gibson’s Glenample station.  Mr and Mrs Gibson were the only residents of that district.  The area is composed of straight wall of cliffs of varying heights and Gibson had cut a zig zag line of steps down the face of the cliff to access the beach.

The clipper ship was making its third voyage to Melbourne from England. The Captain of the ship George Gibb was just 26years of age and was making his first trip to the port as master of the ship. He was married only six weeks before going on board. The ship carried fourteen passengers in the Saloon and nine of them belonged to one family. Dr Carmichael, his wife and seven sons and daughters were looking forward to settle in Queensland for the sake of his health. Their daughter, 19-year-old Eva Carmichael, who survived the ordeal was an energetic beautiful girl. The only member of the Carmicheal family not on board was the eldest son William, who had already been in Australia, was at the very time travelling back to Ireland with the aim of persuading the rest of his family to migrate to Australia.

It was a Saturday morning – the 1st of June 1878. The passengers were cheerfully packing up their things the previous night, for the promised sight of land the next day. Captain George Gibb was awake the whole night standing at the deck. Around 4am in the morning, Captain saw the land around a mile distant. The vision was obstructed so far, the night being dark and hazy.

Heavy fog made it hard to see the Cape Otway Lighthouse, causing the ship to run aground on the hidden reef of Mutton Bird Island.

The ship was on easy sail and upon the sight of land so close, so sudden, Captain Gibb gave orders to hoist wind. The anchors were slipped, and the vessel rapidly drifted into the breaker and in no time got struck on a rock.  The ship was bumping very heavily, and the top hamper was falling about the deck. Most of the sailors were paralysed with fear, and the dying shriek of one, transfixed by a spar from aloft which entered his back and pinned him to the deck, added to their terror. In the rain of blocks, cordage, top-gallant masts and yards, several men were knocked overboard or killed on the deck. It was a scene of horror. 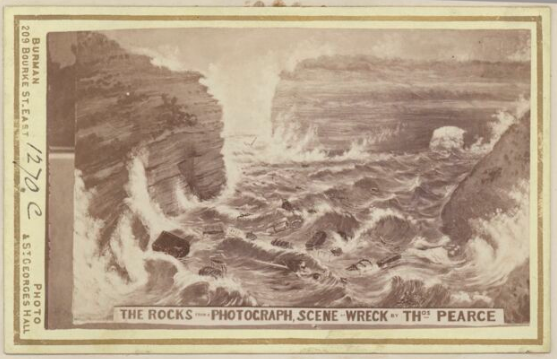 Tom Pearce along with four other sailors were clearing away the port life boats, when the heavy sea struck which knocked the ship over to one side. Pearce held on to one capsized boat. Around 90 metres from the beach, the lifeboat had a violent hit on a rock and Pearce was thrown off.  Pearce had no choice but to swim towards the beach. He succeeded battling with the waves and reached the shore, very exhausted.

On that eventful day, Eva Camichael was woken up before daylight just at the time the ship was experiencing the great danger. Unaware of the danger, Eva thought she was called to see the land, so she started dressing up. As she was putting her veil as the last article of her attire, water started filling up the cabin. Running on the deck, she met the captain of the ship. Captain Gibbs kissed her and said, “Eva, if you are saved, let my dear wife know that I died like a British sailor – at my post’’.  She kissed him and promised to deliver the message, if spared. Soon she was washed overboard by a strong wave.

On regaining consciousness after the sudden plunge, she found herself holding on to a chickencoop along with two other people from her Saloon. The ship was sinking fast and she could hear the screams of those on board. Two other people holding onto the chickencoop, left it for a light spar which came near them.  The three castaways floated together to the entrance of the gorge. The other two, decided to swim towards the beach but was quickly caught in an underflow and drowned. By then, except for Eva and Pearce, every other person in the ship had been already drowned. It was carrying 2375 tons of general cargo, 37 crew and 17 passengers. 52 lives were lost, only two survived.

At the mercy of the sea, drifting on a bit of wood, on the violent waves, Eva’s chances of survival were very slim. She was thrown between two gigantic pillars in a thundering abyss. It is the narrow opening in the gorge where the flux and reflux of the sea form a miniature maelstrom.

She floated and touched a point at the upper end of the gorge about thirty metres from the beach. Eva saw Pearce walking on the barrier of wreckage and screamed to attract his attention. Though Pearce was terribly tired, he managed to swim through the turbulent sea filled with floating wreckage to rescue Eva. By time he reached to her, she already fainted. Pearce fastened his teeth in her clothes and got her ashore. By then she became a corpse like body in a bundle of drenched rags.  Peace brought some grass and leaves to make her a bed and then went to sleep, being greatly exhausted.

It is thought that Pearce reached the shore between 8 and 9 o’clock in the morning, and Eva between 12 o’clock and 1 o’clock, which means Eva must have been in the water for around six hours.

Pearce awoke from his sleep at around 2 ‘o’ clock in the afternoon and found Eva either unconscious or in deep sleep. He realised that if Eva were to live, he must find help. He managed to climb the cliff with difficulty but was shocked to see that they have landed in what had all the appearance of an uninhabited country, in which no food could be obtained. After wandering for some time, he came upon a sheep track and fortunately took the right direction which lead to Gibson’s Glenample Homestead. Had he taken a wrong turn; he would have lost. Gibson’s and their farm workers were the only people living for hundreds of kilometres of land around. When within half a mile of Glenample Homestead, at around 5 ‘o’ clock in the evening, he met one of Gibson’s men named George Ford and regaled the shipwreck incident and about the young lady lying half dead at the beach.

Gibson set out on horseback, leaving instructions for a buggy to be sent after him with blankets, food, and provision for making hot coffee, etc. George Ford followed him with the Buggy for the rescue operation.

When Miss Carmichael awoke, or recovered consciousness, she found herself alone, and under the most depressing circumstances Bereft of father, mother, brothers, and sisters at one fell swoop. Not knowing whether her deliverer would return or not, the screams of the ship- wrecked passengers still ringing in her ears, nothing around her but the shadowy emptiness of the enormous vault, and the water dashing with frightful echoes near its mouth, she got up and started walking in Pearce’s footprints on the sand. She clambered up the cliff as high as she could, and there buried herself in the sand and the scrub.

Gibson reached the caves at around 7’o’ clock, but Eva was missing. The group set out searching for Eva and after almost two hours of searching, when they decided to abandon the search, she was discovered.

Gibson took off his boots and stockings and put them on her and wrapped her in a blanket. With great difficulty, the three men dragged and pushed her up the cliff, placed in the buggy and they were at the homestead by 10 ‘o’ clock. Mrs Gibson took good care of the girl for the next six weeks to bring her back to health.

The next day George Ford rode 45 miles across rough country to the Telegraph station at Camperdown carrying notes from Gibson to the Police Officer there and the Harbour master at Melbourne.  These notes were the first notes of the tragedy received by the outside world.

The story of the shipwreck and the bravery of the young man that saved the life of this 19-year-old girl caught the imagination of the people. The public demand was high for Tom and Eva to marry to give a perfect ending to the story.

Two or three months after the loss of the Loch Ard Tom went to England in another vessel belonging to the same owners, and on the return voyage he was wrecked on the Irish coast, this being his third adventure of the kind.

In 1906, while in command of 4572 ton Orinoco, he was involved in a collision with a 14,000 ton German steamer in thick fog, in which 7 lives were lost.  This incident and the death of his two sons in another ship tragedy resulted in his health to decline and he died in 15th December 1908.

A couple of months after the disaster Carmicheal returned to her relatives in Ireland and married a man in her own rank in life. Tom Pearce was among those who gathered to bid her farewell. They never saw each other again. In 1934, when Eva was 76 years old, she traced Tom Pearce’s surviving son Robert, who was then Chief Petty Officer at Liner Pakenha. She wrote him in a letter in which she asked him to visit her. She wrote, “ If an old woman in her seventies can be found time for a chat over those tragic days , I have never forgotten that , I owe my life to your father.

The letter followed Robert Pearce for several months around the world before he received it. When he eventually contacted her address, he discovered that she had died a week after writing that letter.

Only five bodies were recovered from the shipwreck those of Mrs. Carmichael, her eldest daughter, Mr. Reginald Jones, Mr. George Arthur Towns hend Mitchell, and Mr. Rolleston, all saloon passengers. Rollenston’s body  was washed up on the beach in a mutilated condition, and was buried there. 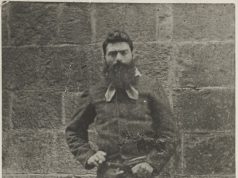 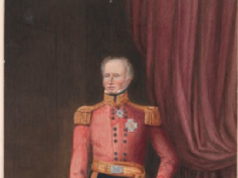