Sea baths were part of Melbourne’s culture since the European settlement of Port Phillip. But open sea bathing remained illegal for a long time. Swimming in the open sea was considered dangerous and vulgar. Large timber structures were built as a protection from predatory marine life and to keep the swimmers away from public view. The sexual morality of those years equated bare bodies to incipient sexual license.

The sea baths provided single sex bathing, the white flags keeping out males and the red one’s warning off females. Each flag flew for a few hours. As usual there were rule breakers. Until the 1910’s open sea bathing was discouraged during daylight hours. By the 1911’s the Moorabbin shire had enacted by laws designating parts of the beach where people could swim away from the baths structures. 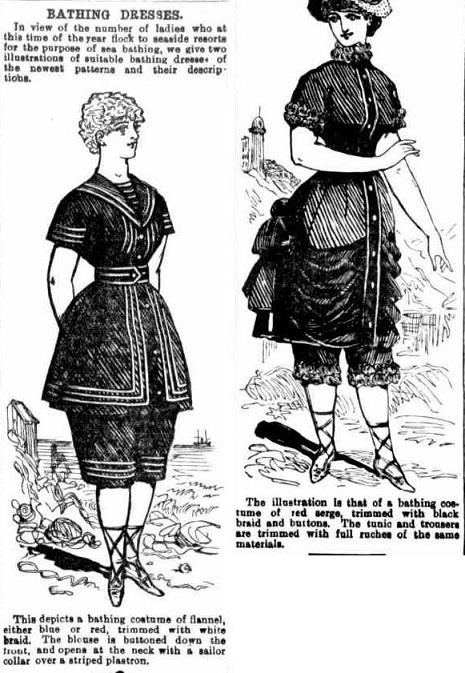 Baths were established at Port Melbourne (Then known as Sandridge) soon after the European settlement. On 18th February 1843, an advertisement appeared at Port Phillip Gazette.

FRANK LIARDET begs to state that the happy effects the beach air and sea bathing has bad on persons in delicate health, so strongly recommended by the [facility], induces him to advertise that he has two or three vacant apartments, where parties will experience every attention and comfort. Fish and [game in season], choice wines. Boats and carriage [conveyance] all times good stabling.

On 10th October 1853, ‘Geelong Advertiser and Intelligencer ‘, republished an Argus report about the establishment of Sandridge Bathing Company. The report goes as follows.

‘’A meeting was held on Thursday at Liardet’s Chusan Hotel, Sandridge for the purpose of making arrangements for the establishment of a company for erecting baths on the beach. Mr Liardet Senior was in the chair, when a provisional committee was formed, and other preliminary business disposed of. The capital of the company was fixed at £10, 000 to be raised by £1 shares.’’ By December that year Gentlemen’s bath was established.

In 1855 Railway Baths were built near Railway Pier between Stokes and Nott streets and this was also referred to as Dardanelli’s Bathing Ship or just the Bathing Ship.

On 20 February 1854, nearly 150-year-old Swedish brig, Nancy, arrived in Port Philip Bay. In Melbourne the ship was deemed unseaworthy and listed for sale. Retired sea captain William Kenney spotted an opportunity there, purchased the ship and turned it into gentlemen’s bathing ship. Nancy was scuttled on north side of the St Kilda Pier, opposite Fitzroy Street. A narrow pier connected the ship to the shore and fences were erected to protect the swimmers from marine predators and to ensure privacy for the swimmers. It became a popular establishment among Melbourne’s elite. By the 1900’s St Kilda Council wanted the bathing ship out its shores. In 1906, the council offered to purchase all of Kenney’s bathing establishments for 5000 pounds, but Kenney refused to sell. Nancy was removed in 1912, which by then was considered as an eyesore.

Royal Gymnasium Baths and Sea Bathing Company was formed, and baths were erected at St Kilda in 1858. The Age published an article named ‘Early St Kilda and Bathing’ on 15th February 1930. The article gives credit to Mrs Hegarty, one of the early settlers of St Kilda Beach, the first to cater for the bathing requirements of frequenters of St Kilda beach. The article says, Hegarty’s business expanded little by little, until Hegarty’s Baths became landmarks on St Kilda Beach. 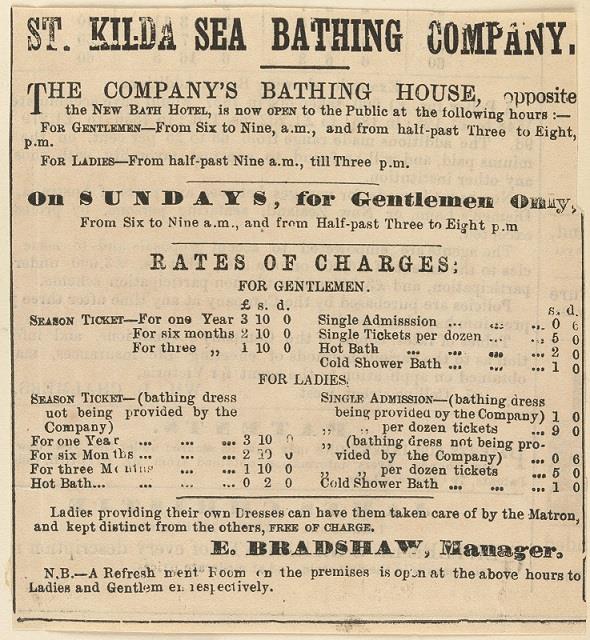 Those years women swimming at sea was not acceptable for many. A news item published titled ‘’ Councillor Corderoys and the Ladies’ Swimming Baths’’ in ‘Melbourne Punch’ on 10th November 1864 may interest our readers.

Councillor CORDEROYS said he was aware that a great amount of bathing and washing was carried on at the Ship during the Sabbath, which he regarded as one of the worst forms of desecration, and that it gave St. Kilda a bad name.

But what he chiefly came to speak about, was the existence of the Ladies’ Swimming Baths, superintended by Mrs. Captain KENNY. That lady should visit any public baths at all, he thought highly reprehensible; but that they should learn to swim, he, and his worthy friend, Alderman MOCKMODESTY, considered unnatural, in fact, perfectly monstrous. “Were our wives and daughters to become like mermaids? Would Mrs. KENNY and her husband guarantee that scales, and fins, and forky tails should not grow out of their fair bodies? ‘ He would repeat that it was monstrous! It was sea-monstrous! It was, therefore, most desirable that these Ladies’ Swimming Baths should be immediately removed.

Captain KENNY did not see this in the same light. He respectfully inquired if either of the Corporation Puritans had ever been to Margate, or Ramsgate, or Broadstairs, during the bathing season? At those places, during the bathing-hours, the sea-beach was the most fashionable place of resort. ‘ Everybody went to see everybody; and everybody was seen, more or less.’’

Nudity was never tolerated on the beaches. The beach segregation of men and women remained the letter of law until 1913.The new Borough of Carrum in 1921 passed a by-law regulating dress in streets and public places. It requires that any person whether in a public or private place should be “decently attired and they should not wear (except on the foreshore or reserve) a bathing costume or any other garment which exposes bare arms and/or bare legs, except such a costume or other garment is covered with a bath robe, overcoat, or coat and trousers at all times properly adjusted.”

On 11th April 1885, Australian Town and Country Journal published an illustrated article of the Australian bathing machine. It says the machine had been improved to suit Australian Coastal conditions. The presence of sharks and other intruders make sea bathing an uncomfortable sort of operation, even by expert swimmers. For ladies and children, the risks are too great and sea bathing is by no means so universal as ought to be on our fine sea beaches. The inventor is Mr Greenfield, who can be heard of at the coach factory of Vial and Sons, Castlereagh Street, Sydney. The improvement has been patented and consists of a portable safeguard attached to bathing machine. It can be lowered as shown in the sketch when the machine is got into water deep enough, and then the bathers can enter a grated enclosure, where they will be safe from intruders. By an ingenious arrangement the grating is raised by the horse pulling on the drawbar when taking the machine from the water.

By the 1960’s there were around five bathing establishments at St Kilda and later on five more were established between St Kilda and Port Melbourne. Many of Melbourne Bayside saw new baths springing up in later years; Sandridge (1858), Brighton (1863), and Middle Brighton (1881). The new men’s bath constructed at Emerald Hill in 1884 was renamed Tramway Baths in 1990.

By the mid 1920’s increasing number of people in Melbourne were bathing in open sea and an increasing number of men and women were mingling freely in water.  Councils of Melbourne’s bayside suburbs began erecting open sea changing pavilions along its foreshore. These new additions proved popular than sea baths.

On 22nd November 1922, South Melbourne Council convened a meeting of municipalities bordering on the bayfront to formulate uniform regulations to control open sea bathing. These are some of the recommendations brought forward by the conference.

Costume to be worn to consist of Canadian two-piece. or similar skirted costume

Bathers must undress in shelters and proceed direct to water

The closing hour for open bathing shall be half past ten o clock each night.

Though in 1907, Australian performer Anette Kellerman was arrested at Boston Beach for wearing sleeveless one-piece swimming tights, Australian shore witnessed such swim wear many years later.  Bathing suits used in Melbourne were originally conservative baggy frocks. In the 1910s they began to shrink, exposing women’s arms, necks and calves. In 1940’s saw the introduction Bikinis in Australian beaches. Bikinis of those years were nothing compared to today’s. The rebellious movement reached Australia in the 1960’s when tiny bikini became the craze.