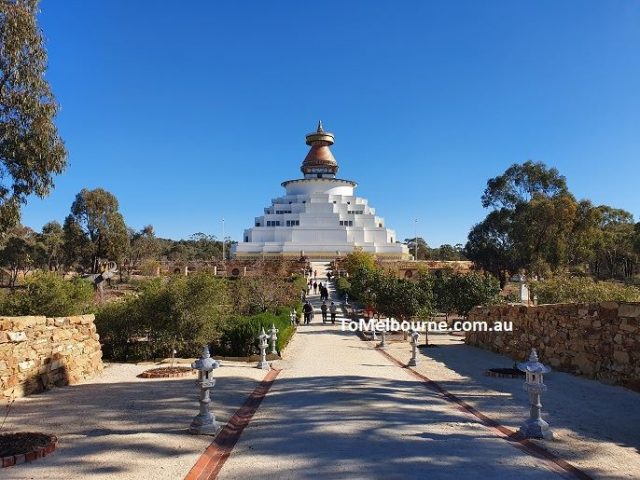 Situated at Myers Flat, 10km north-west of the city of Bendigo in Victoria, The Great Stupa of Universal Compassion is a major tourist attraction. The Stupa is built as the same size and design as the Great Stupa of Gyantse in Tibet. Stupa or Pagoda being the most sacred building in Buddhism, it is only a matter of time, Myers Flat would become the spiritual capital of Tibetan Buddhists in Australia. Stupa symbolises Buddha, an enlightened mind or the path to enlightenment.

The origin and history of Buddhist Stupa is closely related to Gautama Buddha, whose words of wisdom formed the foundations of Buddhism. After Sri Buddha attained nirvana, his remains were cremated, and the ashes were divided and buried under eight mounds or stupas. The relics of the Buddha were spread between these eight stupas situated in Rajagriha, Vaishali, Kapilavastu, Allakappa, Ramagrama, Pava, Kushinagar, and Vethapida, all situated in the Indian subcontinent. The Stupa became synonymous with Buddhist architecture and as Buddhism made its entry into Southeast Asia, Japan and Korea, Stupa’s of similar design and structure came into existence in those parts of the world.

The construction of the Bendigo Stupa began in 2003. Under the ground where the Stupa now stands, ritualistic burial of four ornate metal vases filled with gold and silver jewellery and precious stones were undertaken as an offering to the local spirits.

The Stupa is a 50 metres square at its base and around 50metres in height. Once the construction is fully completed, the Gompa or the temple inside the stupa will feature large statues of Buddha and other deities and will be used for Puja, meditation and teachings. The temple houses the 2.5 metre Jade Buddha for Universal Peace, which is world’s largest gem-quality jade Buddha statue. A consecrated sampling from the sacred Sri Mahabodhi Tree in Sri Lanka will be planted at the temple garden. The Maha Bodhi Tree in Anuradhapura in Sri Lanka has a direct link to Buddha himself. It is over 2000 years old and grown from a cutting brought to Sri Lanka in 288 BC by Emperor Ashoka’s ordained daughter Sanghamitta Teri.

From the visitor centre to the Stupa, the walking path passes through the Peace Park, which showcases symbols from many faiths including Islam, Hindu, Sikh and Christian. Among the statues, the notable one is the 7metre tall Quan Yin. The depiction of the Jataka story of Four Harmonious Friends is another attraction on the way to the Stupa.

A major celebration at the Stupa is the Illumin8 festival in the month of June. The festival was cancelled in 2020 and 2021 due to COVID19 restrictions. The festival commemorates the birth, enlightenment, and death of Buddha and feature light installations, cultural performances, food stalls, and family entertainment. Other celebrations include the Lunar New Year Celebrations in February and the Vegetarian Festival in October.

A vegetarian Café and a giftshop operates from the visitor centre.

Group tours can be booked for groups of 10plus 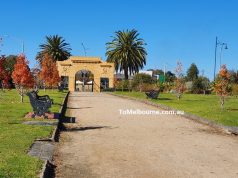 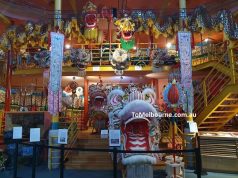 Home › Forums › The Great Stupa of Universal Compassion in Bendigo