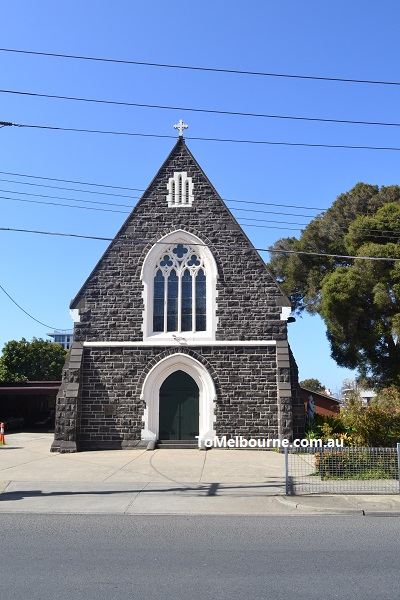 In the 1840’s a tent was set up near the Maribyrnong river and was used as a school for the Catholic children in the area of today’s Footscray. Subsequently a wooden building was erected for the school.

Father Geoghan applied for a grant of land for a church, clergyman’s residence and school and the land where the Church now stands was temporarily reserved on 27th December 1852 . In October 1862, 2-acre land was permanently reserved bounded by Whitehall, Wingfield, Moreland and Hopkins Streets.  The early trusties of the reserve were Bishop James Alipius Goold, Rev M Downing, James Maher and William Pickett.

On 5th July 1873, foundation stone of the first stage of construction of the church was laid by Dr James Alipius Goold, Bishop of Melbourne. Between 150 and 200 people attended the foundation laying ceremony. After the sermon a collection was made, which realized the handsome sum of £266. A sum of about £24 was realized by the sale of tickets. Together with the sum collected before, the church construction fund made a collection of £700. The Church design was of Gothic Style of 14th century.

Architect T.A Kelly invited tenders for the erection of the church in June 1873. It was estimated that it would cost £2500 to complete the church. A baazar was held at the Footscray Town Hall on 21st May 1874 for four days to reduce the estimated debt of ₤1,500 for the construction.

On 3rd May 1874, after the completion of the first part of construction, the church was opened by Rev Dean Fitzpatrick and the first mass was celebrated by Fr McGillicuddy. The church comprised a chancel, part of the nave and one of the two proposed sacrileges. The windows were of stained glass and was supplied by Ferguson and Urie.

Prior to the opening of the church, the chapel school functioned from here on a wooden building first and then a blue stone building, in the area reserved for the church and the school. Mass was celebrated in that building on alternate Sundays. The school was founded in 1857 by Archdeacon M. Downing. The money for the construction of the building was collected in 24 hours and 2/3 rd. of the collection was made from workers building the railway in the district. The building served as a school until 1889 and then it was found too old to repair. The new school building was opened on 23rd March 1893.

It took nearly 13 years to fully finish the construction of the church. On 12th December 1885, Dr Goold blessed the completed second stage of the church. On March 1890 St Monicas was made a mission separate from Willimastown.

The Sisters of St Joseph from Sydney arrived at the school run by the St Monicas Parish in 1894. The community of nuns took over the running of the school. A public welcome was given for the nuns at the church during the mass.

On August 1896, a memorial to late Rev P Walshe who was in charge for Williamstown and Footscray Parishes were unveiled at the church. The memorial was three light stained-glass windows representing the crucifixion.

On 16th November 1950, Archbishop Dr Mannix consecrated the church and the Marble Altar. The occasion marked the diamond jubilee of the parish.  The Church was extensively renovated and remodelled in 1977 but retained its original organ and stained glasses.

The St Monica community has gone multi-cultural over the years like Footscray where the church is situated. The Vietnamese community contribute for the Sunday mass by saying appropriate parts of the mass in their language.

In 1988, church commemorated its bicentenary and a new stained-glass window was installed created by the late Bill Gleeson on the West Wall of the church.

A statue of Mother Mary holding a child was installed at the Church compound and was blessed by Bishop Vincent Nguyen Van Long OFM Conv, on December 2013.