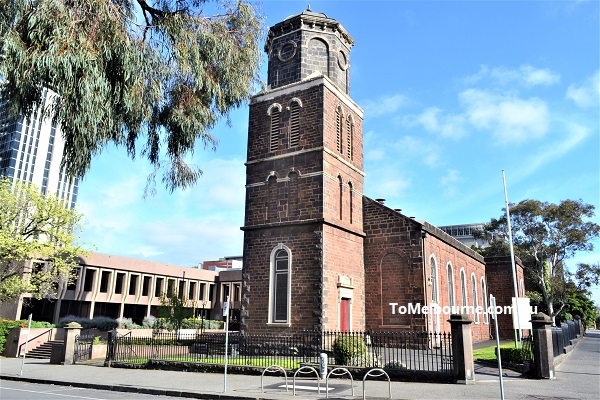 St James Old Cathedral is the oldest Church in Melbourne. This church carries a history, nearly as old as Melbourne’s European settlement. “The mission of St James’ is to be ‘like yeast’ – to have an outsized impact on the wider community by leavening it with love, kindness and joy”, so says the Church’s mission statement and the service of spreading love, kindness and joy, the church is been doing for the past 170 years of existence. With the emergence of many large churches in the early 1900’s, St James lost its prominence and was earmarked for demolition but was saved due to the persistent protests of a few and began its new life in a new location.  The church remained a silent witness to the growth of Melbourne from a little hamlet of European settlers to the great Metropolis that it is today.

Richard Bourke, Governor of New South Wales from 1831 to 1837, made a grant of five acres of land to the Anglican Community in Melbourne in 1837. This undue favouritism towards the Anglicans by the Governor was criticised from many corners. The land was bound by Collin Street, Bourke Street and William Street and Little Colin Street was passing through the middle of it.

A wooden structure which could accommodate around 90 people was built at the location and was opened by Rev J.B. Naylor in 1837. Apart from being an Anglican Church, the church building served as a school during the day and was also lent to the Presbyterians for their divine service on Sunday afternoons. It was here at the Church land; John Batman kept his sheep and paid a rent of £30 towards the costs. The first baptism at the church was for Gilbert, a child of a blacksmith employed by John Falkner, one of the founders of Melbourne. 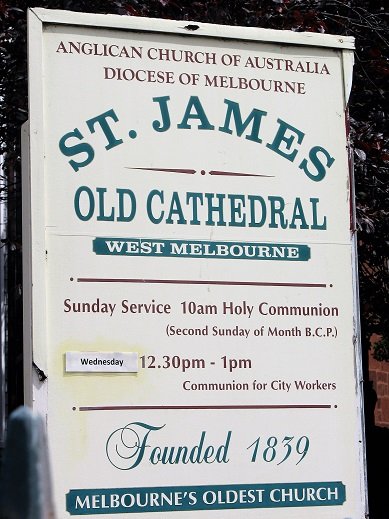 In 1838, proposals were made to build a bigger Church here and subscriptions were received later that year.  In April that year, the First Bishop of Australia Dr Broughton arrived in Melbourne and held a service at the Church on Easter Sunday. On those days, most of the sheep and cattle grazing in the neighbourhood were owned in Sydney and Van Diemen’s Land, so it was decided to make appeals at those places for the fund raising. Architect, Robert Russel, who is credited with the Melbourne’s wide – Grid design of streets, was instructed to prepare the Church design. Foundation stone for the church was laid on 9th November 1839 by La Trobe who arrived on 30th September as Provincial Superintendent and Judge of Port Phillip district. Though Melbourne was just a 4-year-old European settlement, around 2500 people attended the ceremony.

The initial plan was to erect a brick building, but the plan was later changed in favour of a stone structure. The stones were quarried from John Falkner’s  Saltwater River quarry. Despite the limitations of an unexploited district and lack of skilled tradesmen, Robert Russel put all his energies into building the church.  But his difficulties were enhanced by lack of funds and ignorant meddling by the building committee. His original plan for the church was impossible to complete due to the funding constraints and he was forced to change his design and finally reached a dead-end. Russel was unjustly blamed for the state of unfinished church and his dues were paid off and the services of another architect was requisitioned to complete the work.

The unfinished building was opened for worship on 2 October 1842, under the license of Dr W.G Broughton, the first and the last Bishop of Australia. The building work was completed by 1847. The original estimation for the Church was £5000, but when it was completed, the actual cost incurred was £10415.

In 1837, when Bishop Dr Broughton visited Melbourne, the Anglican Congregation requested him to send a Clergyman and he responded by sending Rev Grylls. Rev Grill officiated at the Old building for a year but did not return to the Church after obtaining a leave to go to England to bring his family. The opening service at the new building was conducted by his successor Rev Compton Thompson.

The Diocese of Melbourne was founded in 1847. Charles Perry, consecrated as Melbourne’s first Bishop, arrived in clipper Stag at Melbourne on 23 January 1848 and was installed at St James’s on 28th January. St James became the Cathedral of the new diocese. After the Gold was found in Victoria, Melbourne was growing at an exponential rate. Many more buildings have come up in the city and along with-it bigger churches. As time passed, St James Cathedral became neglected and was not sufficient to cater for the growing population of Melbourne. In the early 1900’s , the building was found to be unsafe and a decision was taken to demolish it, but the decision was later overturned . 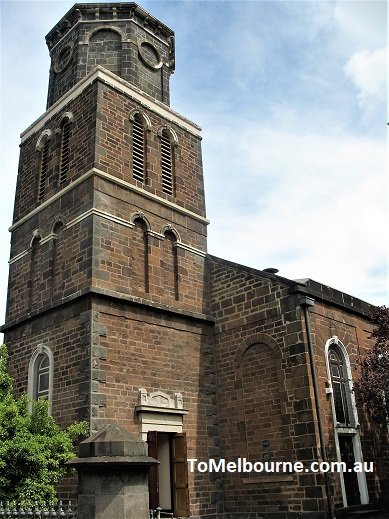 It was decided to re-erect the building keeping its original design structure at a new location in West Melbourne. After a painstaking stone by stone re construction, It was re-opened for worship by Archbishop Lowther Clarke on 19th April 1914. The Marble Baptismal fount in the church is from the 14th century established, St Katherine’s Abbey church in London which was pulled down to make way for St Catherine’s Docks. It was presented to the church by La Trobe when he laid the foundation stone of the Church. 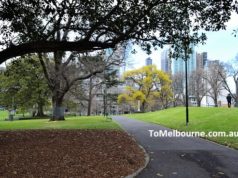