Located 36 km south-east of Melbourne CBD, Shri Shiva Vishnu Temple at Carrum Downs is the largest Hindu Temple in Melbourne. This is the most prominent Hindu temple in Melbourne and devotees come here from all around Melbourne on weekends and Hindu auspicious days. Temple also organises Hindu Festivals like Holi and Deepavali, which are well attended.

The temple is dedicated to Hindu Gods Shiva and Vishnu and these two deities have separate shrines and entrances.  Other deities in the temple are Ganapathy, Chandikeshwar, Subrahmanya (associated with Shiva) and Mahalakshmi, Andal, Sri Ram, Sita and Hanuman (Associated with Vishnu).  There is also a shrine for Navagrahas (Nine Grahas of Indian Astrology). Graha means planetary bodies that can influence human life.

Brahma the creator, Vishnu the preserver, and Shiva the destroyer are the Supreme Divinity or Trinity in Hinduism. There are only a very few temples for Lord Brahma, the creator in India. Shiva is the Supreme being who creates, protects and transforms the universe and is usually depicted with a serpent around his neck, a crescent moon adorning his head, river Ganga flowing from his hair and carrying a weapon Trishula in his hand. Shiva is the patron God of yoga, meditation and arts. Vishnu is the “preserver” in the Hindu trinity and is usually depicted as having a dark, or pale blue complexion and having four arms.

There is a children’s playground, though small in size, good enough to engage the naughty ones.  A small area near the playground is where peacocks are housed. Peacock is the Vahana (Vehicle)of Lord Subrahmanya (Son of Lord Shiva) in Hindu mythology.

The temple has a Canteen, famous for Indian vegetarian delicacies like Poori, Idli , Masaladosa, Thali, Kesari, Uzhunnu Vada etc. This is run hygienically and is the best place for tasting Indian vegetarian food at reasonable prices. For Canteen opening hours – refer the Temple website.

The temple auditorium can be booked for functions like Wedding ceremony.

The Temple has plenty of parking and parking is free. Toilet facility is available 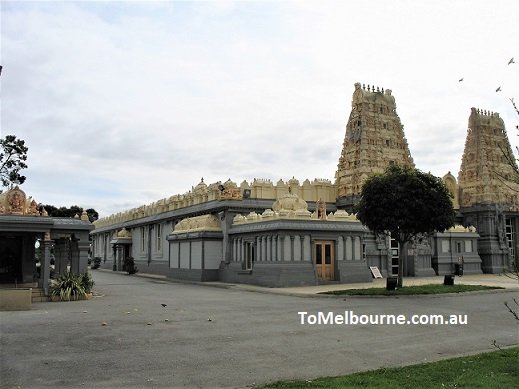 History of the Temple

Hindu Society of Australia, an incorporated body was established in 1982 with the objective of constructing a Hindu Temple in Victoria. In 1984, with donations from members, likeminded people, and loan from the bank, the Society purchased 14acre land at the suburb of Carrum Downs for a sum of $72,300.

The Ground-breaking Ceremony (Ceremonial breaking of ground to formally begin a construction project) was conducted in 1986. In 1988, Council gave formal permission for construction of a temple and soon preparations began for the construction of a temporary building to commence Poojas. Foundations stones were cut in India and blessed by priests before transporting to Melbourne. Foundation stone laying ceremony was conducted on 5th June 1988. The first pooja at the temporary temple was held on 6 May 1990.

On 22nd May 1994, Maha Kumbhabhishekam (Hindu temple ritual that is believed to homogenize, synergize and unite the mystic powers of the deity) was organised to consecrate the temple after the completion of the main temple.

In later years the temple constructed a Cultural Centre which has a library, a heritage museum, an educational facility, venues for residential seminars, cultural displays and community functions and a large industrial kitchen and dining hall.