On 20th August 1860, around 15,000 people gathered at Royal Park to watch a once in a lifetime event. The Burke and Wills Exploration, largest and best-appointed expedition yet organised in the Australian colonies started from Royal Park in Melbourne for the purpose of exploring the vast unknown interior of the Australian continent. The Colony of Victoria was just 9 years young separated from NSW in 1851. Along with the doomed expedition, Royal Park also entered Australia’s history books. In 1890, a monument was dedicated to the explorers at the site in Royal Park, which still stands. The frontal inscription on the monument reads, “This memorial has been erected to mark the spot from whence The BURKE and WILLS Expedition started on the 20th August 1860. After successfully accomplishing their mission, the two brave leaders perished on their return journey at Coopers Creek in June 1861”. Unlike the explorers, Royal Park survived, from the demands of an encroaching city.

181 hectares (447 acres) of land known as ‘Royal park’ is located 4km north of Melbourne CBD in the suburb of Parkville. Thanks to the vision of one man, Victoria’s first Lieutenant Governor, Charles La Trobe, Melbourne today is a city of gardens. The history of Royal Park is also the story of those men, who displayed the vision to imagine that, “where such public places of resort are in the vicinity of large towns, the effect produced on the minds of all classes is of the most gratifying character”.

Royal Park is the largest park in the city of Melbourne, the closest point to the city is just 2km away from the CBD.

In 1844, Melbourne Town Council send a petition to the colonial Government in Sydney, pointing out the need to have parks within a distance of the city. Charles La Trobe negotiated with Governor Gipps in Sydney over the reservation of land north of the city. In 1845, 2560 acres or 4 square miles of land was set aside for public purposes, which was to include the site of Royal Park, the University of Melbourne, Melbourne General Cemetery and the Princes Park. In 1854, before leaving Melbourne, La Trobe instructed the Surveyor General on where to mark the boundaries of Royal Park, which at that time was around 730 acres. But when Royal Park was officially gazetted as public park in 1876, only 424 acres were assigned for the purpose, the rest carved for residential developments. 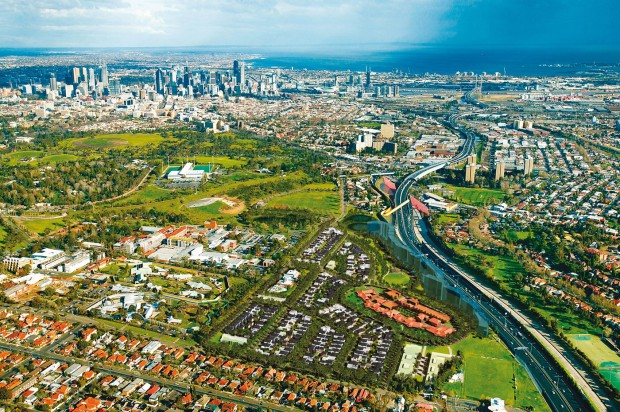 For decades, the park remained undeveloped and was used for cattle grazing. But by late 1860’s park was frequented by people on weekends during summer. Cabs made regular trips to the park from hotels in the city and the locals just walked to the park. A new carriage drive and footpath which encircled the reserve and extended nearly 4.5 miles was built with trees planted on each side. The plantings were donated by Ferdinand Mueller, the Director of the Botanic Gardens, who was also a trustee of Royal Park.

Unlike Fitzroy, Carlton or Alexandra Gardens, Royal Park adopted a plan for a natural park land, due to which even today it looks more like an open grassland with intermittent trees. Its open character made it ideal for sporting activities. The early developers of the Park wanted to keep it that way and feared that planting too many trees would reduce the area available for sporting activities. Its open nature came handy when the military needed the park in 19th century and during the World War I & II.

The park land has been taken for many purposes over the years. The experimental farm, zoological Park which became Melbourne Zoo, Melbourne General Cemetery, University of Melbourne and it was also sold for the creation of the suburb of Parkville. The Upfield rail line cuts the park into several parcels. Further excisions continued for roads, Royal Melbourne Hospital (1944), Royal Children’s Hospital (1957) and the Royal Dental Hospital (1963).

In 1858, an experimental farm was established at Royal Park to test different crops, farming techniques and equipment.

In 1857, 55 acres in Royal Park were granted for a Zoological park and in 1862, a little over 50 acres at the centre of the park was permanently reserved, which later became Melbourne Zoo. The zoo was opened on 6 October 1862.

Bell’s Life in Victoria and Sporting Chronicle’s report, “The Acclimatisation Society’s Depot in the Royal Park” Published on Saturday 11 Mar 1865, gives a picture of Melbourne Zoo and the pathetic situation of Royal Park then.

“Few persons are aware how pleasantly an hour or two can be spent in inspecting the Depot of the Acclimatisation Society in the Royal Park. In its present state the Park is in every way unworthy of the title conferred upon it. Stunted and withered trees, burnt up grass, broken fence, and ill-kept roads are the characteristic features of the  locality, and the northern entrance to the metropolis of Victoria is anything but what a traveller might expect to behold when informed he was passing the boundaries of a Royal Park where scarcely a green spot is visible. The enterprising traveller, however, may discover an oasis in this desert, a green spot in the wilderness, and will be repaid for the trouble he takes in finding out the pretty garden in which the Society have stored their living treasures.”

In the early 1860’s, Melbourne’s powder magazine was moved to Royal Park to keep it away from the populated areas of the city. In 1864, the powder magazine at the park was adapted and extended to receive mentally ill patients until they were allocated a place at the Yarra Bend Asylum, when Yarra Bend Asylum couldn’t cope with the number of patients seeking treatment.  A quarantine station for infectious diseases was established at the park during the smallpox outbreak in 1869 much against the wishes of Hotham Council.   A migrant’s home was established in 1883 by the Immigrant Aid Society.

In 1901, a contingent of soldiers from Australia and Fiji were stationed here in preparation for the opening of the Parliament of Commonwealth of Australia.

In September 1915, following outbreaks of disease at other more crowded military camps in Victoria, a new military camp was opened at Royal Park. Thousands of men enlisted, camped, trained and paraded at this site. To mark the King’s Jubilee in May 1935, an extravagant military display involving the RAAF was held at Royal Park. During the second World War it was operating as a recruit reception depot for soldiers. In 1942, it was used as staging camp for US Troupes en- route to the Pacific, which was known as ‘Camp Pell’. Camp Pell was later used as emergency housing by housing commission. It was demolished before the Melbourne Olympics of 1956. Anzac Hall was built in late 1940 for use as a cinema and recreation hall for troops at Royal Park.

In the 1950’s, an area in the park was taken for the Royal Children’s hospital which was opened in 1962. All this is now located outside the boundaries of Royal Park.

An area of emergency public housing was established here between 1947 to 1956 to deal with the post war population boom.

For the 2006 Melbourne Commonwealth games, .2 sq km of former Royal Park Psychiatric Hospital site was turned into Athletes village which housed approximately 7,000 athletes and support staff during the Games. After the games, it was transformed into commercial housing.

Parkland was lost in 2005 when the Victorian Government used the parkland to build an extension to the Royal Children’s hospital.

Sporting facilities at the park

Royal Park Golf club is situated at the northern boundary of the park near Old Poplar Rd. Golf was played at Royal Park since the 1890’s but without a proper golf course. A golf club was formed in 1903 and land was obtained for an 18-hole course for nominal rent. In 1934, Melbourne City council took control of the Golf Course. This possibly could be the only Golf course with both train and tram running on it.

The Capital City Trail for cyclists passes through Royal Park.

What you can do at Royal Park

1.Go for a stroll 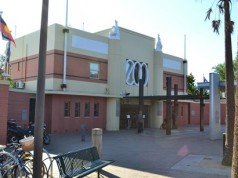