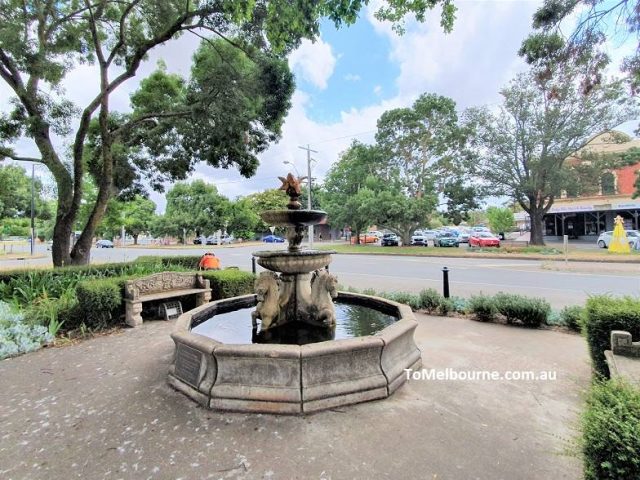 The township of Romsey at the local Government area of Shire of Macedon Ranges is situated 61km north of Melbourne. Romsey still maintains the country charm with its old buildings and quiet surroundings, though Melbourne’s urban sprawl has already reached its doorsteps. Romney and the nearby Lancefield offer visitors a choice of boutique wineries. Another attraction is its walking and cycling trails with spectacular views along its length, only a rural Victorian town can tender.

Five Mile Creek meanders through the north of Romsey and is a popular recreational trail for the locals. The creek captures flows from foothill of Mount Macedon and heads east through the township connecting as a tributary to deep creek in the east. Much of the five-mile creek flows through private property.

A stroll through the character filled main street is enough to discover the boom periods in Romney’s history. The impressive red brick facades of the Mechanics institute, the old post office to the fascinating former produce stores, hotels and cottages of Romsey, remain as the still standing examples of Victoria’s rural village architecture.

Situated at 20 Palmer Street in Romsey, Seymour cottage (formerly known as Barton Cottage) was the family home of Sidney and Elizabeth Seymour, which the family owned until 1915. It is believed to be built in 1856 from pairs of meranti timber doors imported from Singapore. The home was gifted to the Romsey and Lancefield Districts Historical Society by its last resident Mrs Isa Allen for preserving for future generations; but it is evident that the society failed in its obligations.

Located at 25 Pohlman Street in Romsey, the Romsey Presbyterian church was opened and dedicated in July 1865. Today the church functions as Uniting Church.

Located at 160 Glenfern Road Cope-Williams Winery was established in 1977. It centres on a fine homestead and a walled English garden and produces the award-winning Romsey Brut as well as pinot noir and chardonnay. The tasting room is open daily from 11.00 a.m. to 5.00 p.m.

Located at 122 Main Street at Romsey, the present brick building was constructed after a major fire in 1904. The first Mechanics institute was established in 1875 and on 29th May 1884, foundation stone for a larger, new building was laid, majority of which was destroyed in fire.

A dedicated shared path for pedestrians and cyclists will take you all the way to Lancefield and back (15.9km round trip). Where Romsey’s main street become Melbourne – Lancefield Road, the path converts to a well-formed granitic surface and classic village streetscapes make way for rolling farmland. Deciduous trees flank the roadside between Romsey and Lancefield, which make for breathtaking scenes in the autumn months. ( From the Info boards of Romsey)

The Macedon Ranges is known for its cool climate and fertile soils – perfect conditions for producing mainland Australia’s finest wines. Ramsey and Lancefield enjoy a sizeable share at almost one quarter of the regions 40+ vineyards, many of these with cellar door to visit. (From the info boards of Romsey)

The Wurundjeri tribe of Aborigines occupied the area before the European arrival.  In 1824, Hamilton Hume and William Hovell of the Hume and Hovell expedition were the first white people to travel through the area which later became Romsey Shire. John Brock who came with his family from Van Diemen’s Land was the first to settle in the Romsey area. In 1836, Brock built the first bluestone house in the district and in 1839 took out license for 25,600 acres of land south of Romsey, which he named ‘Bullando Vale’. In 1850, William John Turner Clarke took up 31,750 acres extending south from Bullando Vale through special survey. In 1838, to the north of Romsey, 20,000 acres Springfield Run was taken up by James Fulton.

The first land sale in Romsey District happened in 1855 at the Kilmore Crown Grants Land Sales Office. In 1856, William Campbell purchased 784 acres on the west side of the proposed township of Romsey. Cornelius Shape Haley’s land acquisition in the area began in 1856 and eventually bought up 4767 acres of land between Romsey, Lancefield, and Rochford.

On 16th January 1858, Lancefield Post Office began functioning from the hotel Drovers and Carriers Arms ( Later became Royal Mail Hotel) and after one year the post office was renamed as Five Mile Creek Post Office. The Post Office was moved closer to the centre of current township in 1864.

The new township of Five Mile Creek was renamed Romsey. Five Mile Creek was located around 2km north of present township of Romsey. Romsey area was proclaimed a district in August 1862 and soon after Lancefield Roads Board was formed with 9 members. The principal aim of the Roads Board was to build roads from Lancefield-to-Lancefield junction to aid the Melbourne Bendigo Railway line. There was a toll booth on the Lancefield – Melbourne Road at Monegeetta. Between 1860 and 1870, Romsey grew as a small village settlement boasting of a Post Office, Police station, a school, three churches and a courthouse.

The Lancefield Roads Board became a shire and was named after a ballot on 24th April 1871 as Romsey Shire. In 1881, Riddell Riding was severed from Gisborne shire and joined with Romney shire. Lancefield Shire was carved out of Romney Shire on 10th January 1890. In 1916, Shires of Springfield and Lancefield were amalgamated with Romsey Shire.

A railway line connecting Melbourne to Central Victorian Goldfields were hatched in the 1850’s. the line connecting Sunbury to Lancefield Road and Riddles Creek to Woodend was opened on 8th July 1861. On 6th June 1881, Railway was extended from Lancefield Junction (Clarkfield) to Lancefield. Romsey Station was built on land formerly owned by Paul Weston after tenders were called in April 1881. The former Romsey station was on the now dismantled Clarkefield-Lancefield railway which was in operation between 1881 and 1956.  Many fine buildings came up in Romsey in the 1880’s including F.O.Neal’s General Store(1884), The Court House(1887), Commercial Bank(1888) and the new Post Office building(1890).

The Melbourne Milk Supply Co established its condensed milk factory during this time and butter processing plants were added later. Many other industries came up in the 1880’s but fell victim to the depression of 1890s.

We think the best way to get an idea of Romsey District in the first decade of 1900 is to reproduce an article from ‘The Australasian’ published on 13th September 1913.

‘’Agriculture has been successfully carried out in the Romsey District for upward 50 years. It is therefore one of the oldest farming parts of Victoria. Romsey is 10miles distant from Lancefield Junction, where the branch line to Lancefield the terminal station, diverges from Melbourne to Bendigo Line. It is 41 miles from the capital thus being favourably placed. The unbroken area of good country extends to some 6mile square. The size of the farms varies considerably, the average being 160 to 300 acres. The volcanic soil generally speaking, goes down to 18inch, resting on an iron stone bottom, enabling it to drain well and it is always possible to work it after a heavy rainfall. The Romsey District is surrounded two sides by hills. Mount Macedon lies on the southwest and Dividing Range on the north. This attracts showers throughout the summer months, while other parts are in the throes of dry spell, Romsey is in the full enjoyment of a bountiful season.

The Romsey district long enjoyed the quality of its potatoes, it is also favourably known for the excellence of the barley it produces. The Romsey land has been cropped continuously without being laid down to pasture for so long that it is becoming worn out ‘’

But by the 1940’s Romsey’s once fertile lands were turned over to grazing. This paid off well for the farmers due to the wool boom of the 1950’s. Then came the land boom of 1970’s, which saw agricultural properties being subdivided turning Romsey to a dormitory town.

Romsey a veritable Garden of Eden by Peter Mitchell