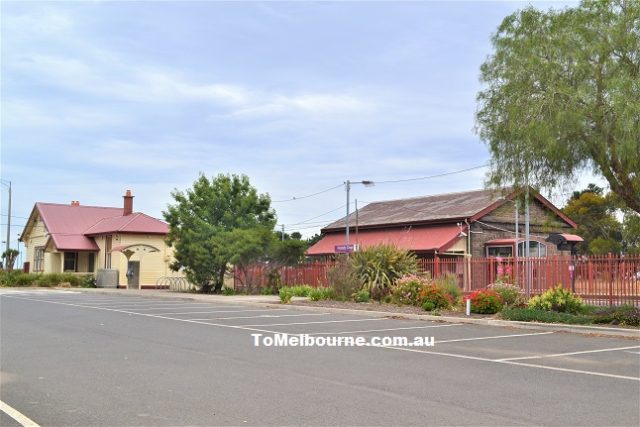 The township of Riddells Creek lies on the southern foothills of the Macedon Ranges, 58km north west of Melbourne CBD. The township and the creek that flows through it shares the same name, which is a tributary of Jackson Creek. The creek was previously known as Macedon River. Riddels Creek was named after its first settler John Carre Riddel.

John Carre Riddell accompanied by his young cousin Thomas Ferrier Hamilton and his uncle Colonel Hamilton of Cairnhill, left England in 1839 for Australia in the 450 Ton sailing ship Abberton, a voyage that took four months to reach Port Jackson. In Sydney, they bought a horse each and pistol and began their journey towards Port Phillip Bay, overland, following the mail route. For a brief time, they settled in Western Districts purchasing a run jointly with another person. After selling their interest in the property, Riddell and Hamilton purchased 25 square mile Mount Macedon run for 2000 pounds which was part of Henry Howey, pioneer settler of Gisborne’s cattle Station. The land was not freehold being occupied, as was customary under a de-pasturing license for which the partners paid 10 pounds a year at first. 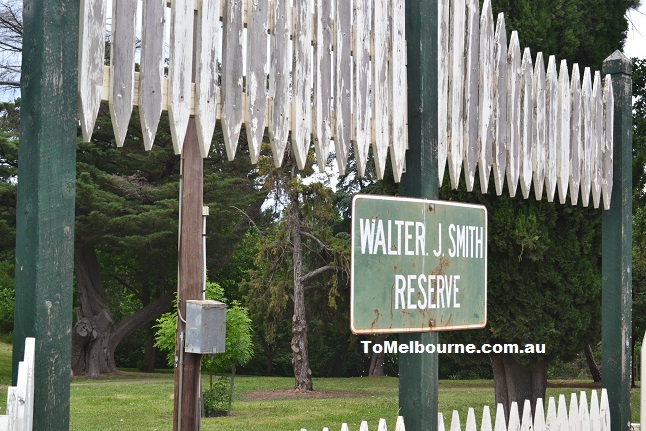 In 1842, the duo established a homestead near Riddells Creek, which then was known as Macedon River. The Homestead was named as Cairn Hill, after a Hamilton family property in Scotland.

Riddells Creek was covered with Stringbark and yellowbox trees in abundance before the European settlement which were good for burning. This resource came handy in satisfying the demand for firewood. The sawn timber were transported in horse drawn wagons and loaded into rail trucks. Riddells creek prospered on its pastural produce, timber and granite.

The soil was not that fertile for a good harvest, which made the diary farming principal occupation of the early settlers.

In February 1853, The Melbourne, Mount Alexander, and Murray River Railway Company received the Parliamentary assent to build railway from Melbourne to Williamstown, Bendigo and Echuca. Later newly established Victorian Railways took over the project from The Melbourne, Mount Alexander and Murray River Railway Company. The railway was passing through Riddells Creek and Riddell Creek was host to one of the largest labour camps. Most were migrant labourers who planned to settle in Australia. They stayed with their families in the tents. A railway town came into existence there and even after the railways were completed some of the workers settled in Riddells Creek giving a permanent nature for the houses there. To cater for the needs of the camp many shops and businesses opened in the area. A school was opened on 4th June 1859 for the worker’s children under Church of England. William Kettlewell and his wife were the teachers. The State Government took over the running of the School in 1865 and it became Riddells Creek Common School No 528. 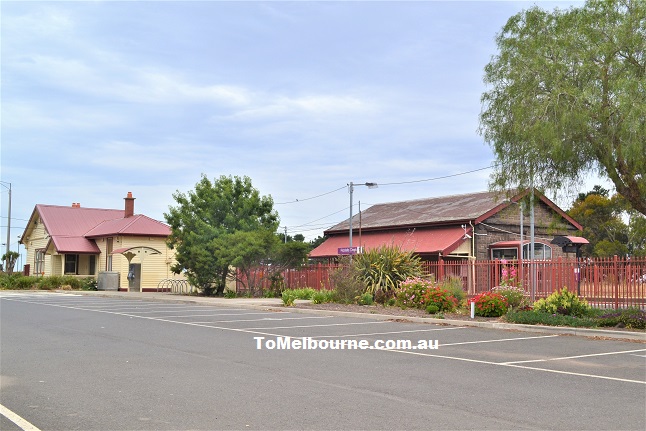 Riddells Creek was the main depot for  the  ballast  required  for  the  railway  line. A quarry located at where Wybejong Park stands today, provided granite for the 2 railway bridges built for the Bendigo line. The railway bridge is on the Australian and Victorian historic buildings registers, and the railway goods shed is in the Victorian register.

Riddells Creek hotel situated opposite the railway station is one of the first buildings in the township. The original building was destroyed in a fire in 1982. Railway Hotel and View Hotel were the two other hotels in the early period that served the area. 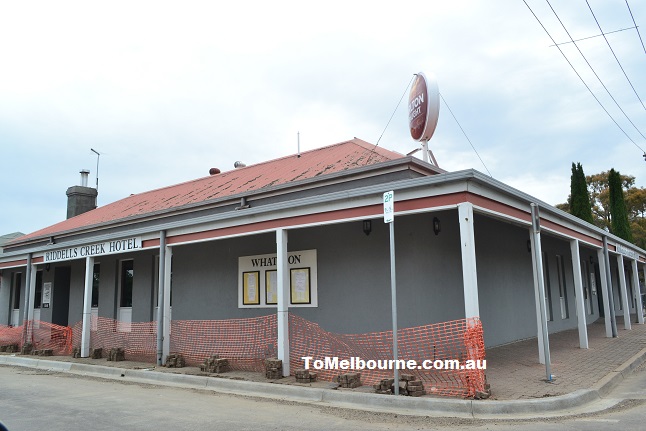 In 1863, Thomas Smith, together with his father and brothers, John and William established a nursery at his 30-acre family estate, which became very popular. The Smith family carved a name for themselves in horticultural industry of Melbourne in the early years. Initially they were mainly engaged in the raising of fruit trees, then moved on to orchids. Smiths’ association with Baron Von Meuller, supplied nursery stock to help  establish  the Melbourne Botanical Gardens. The nursery became so well known in Australia, by 1875 they were importing trees and shrubs by train including 12,000 apple trees annually. In 1909, the nursery was partially destroyed by a disastrous flood. 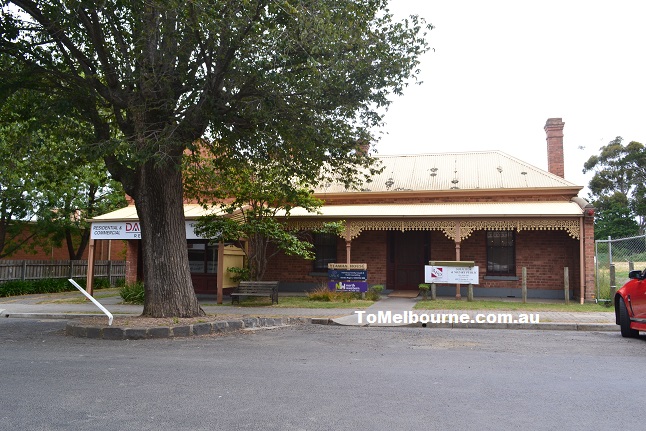 The Rosenberg Vineyard was established in the 1870’s in Riddells Creek.

The first Anglican church was located at the property of Riddell and Hamilton’s Cairn Hill Estate. Around 1858, when railway workers setup camp in Riddells Creek, the first incumbent of St Paul’s Gisborne Robert T Cummins began holding services at Riddells Creek. After the construction of the railway line, more and more permanent settlements were taking place up the hill towards the north end of the creek. The Anglican Church was relocated to Melvins Road to the site which it still occupies.

In 1866, James Mackenzie Milling Company started operating a Flour mill adjoining the Smith’s nursery powered by artificially created waterfall. A fire in 1874 gutted the establishment and an insolvent owner sold the property to a Melbourne man named William Corrie. Corrie rebuilt it to a flock mill while still using the waterpower. Corrie enlarged the blue stone building and renamed it as Falbarrow House. The water powered turbine at the mill provided electric power to the house using a dynamo, making it one of the first private housings in Melbourne using electric power. Corrie moved his flock mill to Melbourne in 1882. It remained idle until 1899 when it was gutted by fire and then sold to an experienced miller named Otto Julius Muller. He turned it again into a flour mill and ran it until 1918.

Even today, Riddells Creek maintains its country charm. Its country charm and scenic drives attract visitors to the township. An easy one-hour drive to Melbourne CBD, resulted in many Melbourne workers calling this home. Conglomerate Gully Flora Reserve at Riddells creek attracts occasional visitors from around for an engaging bush walk.

Walter J Smith Reserve on the Main Road with its duck and geese provides a scenic setting for the heritage listed Railway Bridge constructed in 1860.

Wine lovers may prefer to give a try at Mount Charlie Winery which is usually open Friday to Sunday from 10 – 4pm. Riddells Creek Farmers market which is open on 3rd Saturday of the month should be a place of interest for those who cherish the feel of an authentic country farmers market. 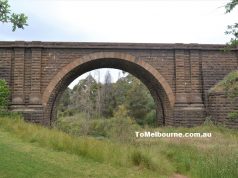