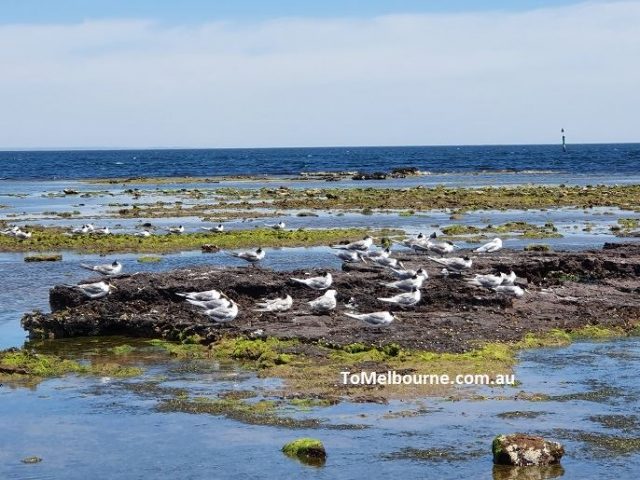 Ricketts Point Marine Sanctuary is situated just off Beaumaris in Melbourne in the Port Phillip Bay around 24km southeast of Melbourne CBD. The sanctuary is popular for snorkelling, diving and bird watching. The sanctuary extends west from Table Rock to Quiet Corner for about 500m offshore, following a line of in-water navigation marks and marine sanctuary boundary piles and buoys. 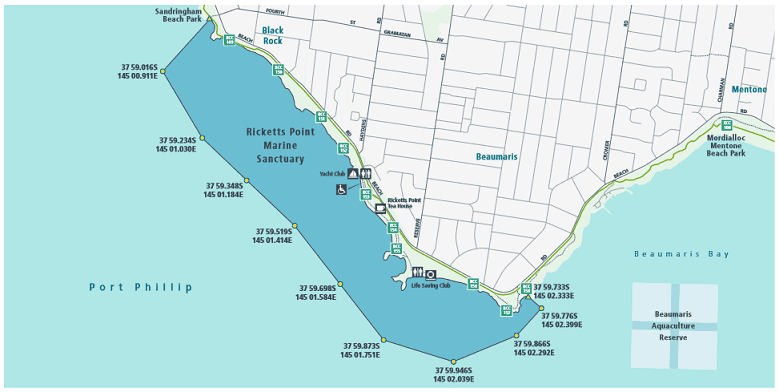 The name Ricketts Point is thought to have been derived from the Ricketts family that owned a fishing and beach shack on the foreshore. David Charles Rickett with his brother Thomas Johnson, and sister Elizabeth, acquired six acres of land from Henry Dendy in the 1840’s. This area also may have gained its name due to a mansion built on high ground area inland of beach road known as ‘’The Point’’, built for wealthy wine merchant and former Melbourne Mayor, Matthew Lang in 1890, the property was demolished in 1959. 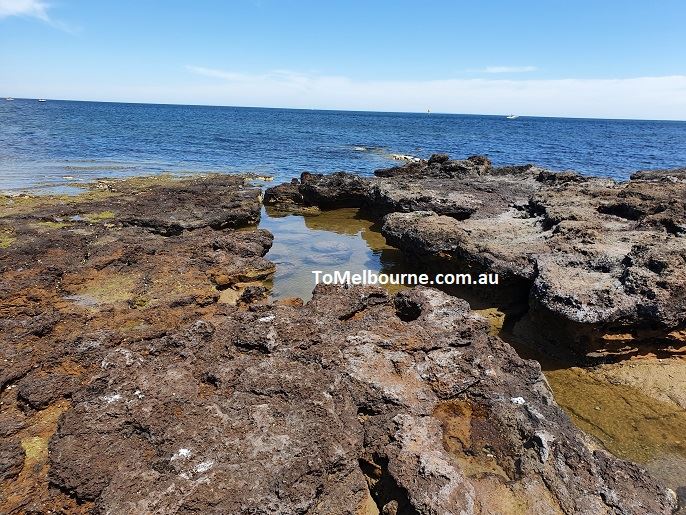 Ricketts Point is well known for its rocky shore and reefs which for decades have attracted beach lovers, fisherman, snorkellers, painters, bird watchers and students of marine life.

Between 1960 and 1985, observers were concerned to see signs of depletion and hence a long campaign was initiated. The declaration of a marine sanctuary in 2002, marked the start of increase in creatures inhabiting the reefs and of fish numbers. The tea house constructed on the site of an earlier kiosk attracts visitors from distant places. 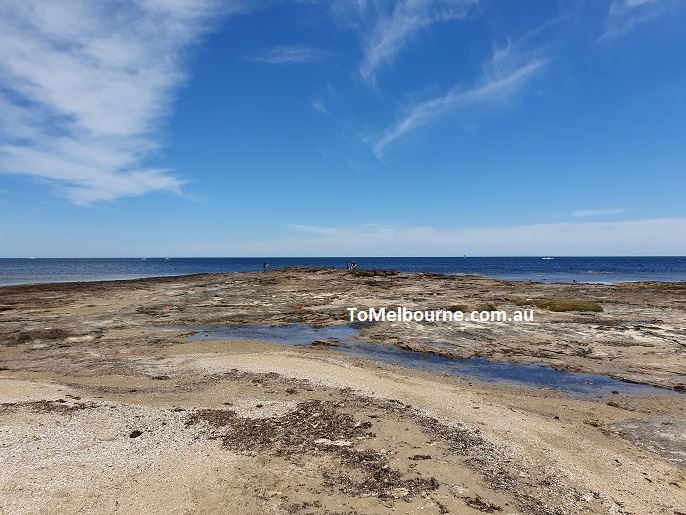 The marine sanctuaries unusual landforms, including its extensive rock platforms and sea caves provide habitat for a diverse variety of flora and fauna including areas for migratory and threatened bird species.

The photograph(a) shows the shallows at Ricketts Point and the measured nautical mile beacon visible on the rocks off Ricketts Point. The other end of the measured nautical mile is at Quiet Corner, Black Rock. If sailors can line up the two wooden beacons at Quiet Corner, they will be located at the northern end of an accurately measured mile. Modern satellite technology made such aids obsolete.

The beaches around Rickett Point have inspired many artists including Tom Roberts and Fred McCubbin and have long been a favoured destination for bathing and day trips. Ricketts Point also provides opportunities for visitors to enjoy and appreciate cultural values. Indigenous tradition indicates that the sanctuary is part of the country of the Boon wurrung people.

Ricketts Point Marine sanctuary protects an amazing diversity of marine life including squid, octopus, cuttlefish, urchins and many different fish species. Snorkelling, diving and rock pooling are the best way to spot these fascinating animals as they can often be seen feeding and sheltering between rocks and within the seagrass beds. 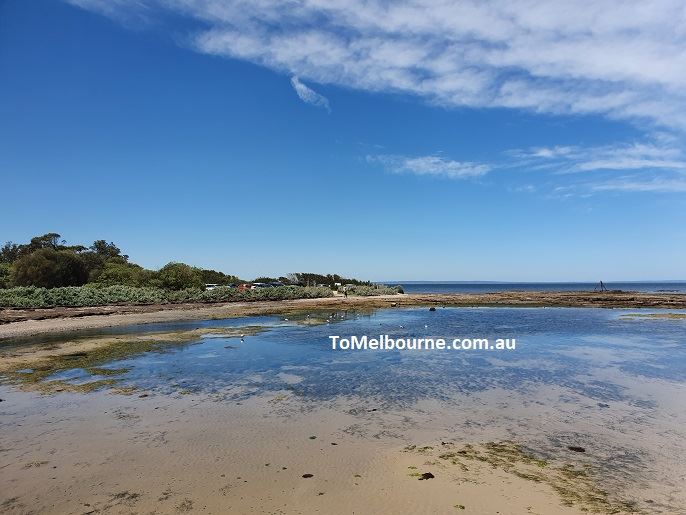 Seagrass beds dominated by Zostera sp. and Heterozostera sp. cover approximately 1 ha of the sanctuary. They form complex and extremely protective environments that provide habitat, nursery and feeding grounds for a wide range of organisms, including valued King George Whiting and Flounder.

Seagrass beds stabilise the sediment and remove dissolved nutrients from water and are valuable part of food chain. The leaf blades are specially adapted to capture light as they need to provide energy for growth. Local seagrasses grow to a length between fifteen and seventy centimetres. They oxygenate the water and provide shelter and breeding areas for many marine organisms and food for fish and swans.

The sanctuary is home to a variety of birdlife. The most common cormorants here are Pied Cormorants and little pied cormorants. The silver gull is also regular here. The other common gull species here are much larger Pacific Gull, often seen scavenging food along the shoreline. There are also many species of Tern, the most common being crested tern. 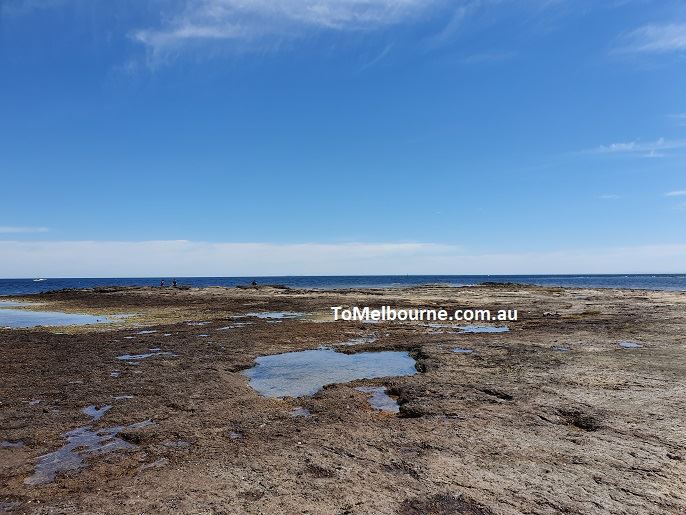 The other birds that regularly visit Ricketts Point are White faced Herons that feed on the exposed reefs, and Hoary headed Grebe that feeds underwater, the black swan that feeds on seagrass and Australasian Gannet that dives for food offshore. Migratory birds protected internationally by Australia’s treaties with China and Japan can also be found resting here.