Queenscliff Railway Station was opened in 21 May 1879 and featured extensive facilities including 122m platform, signal 2 loop siding opposite the platform track and an east yard with 4 tracks, hand operated Derrick crane, carriage jack and a 15m turntable. A goods shed with timber platform was built in 1888 and an engine shed was also provided. The original shed serving until the current structure, originally situated at Coburg was moved by rail to Queenscliff and erected at the end of No 3-track extension. It is believed this occurred in 1921.

The goods shed and the platform was situated on the town side of the track next to the crane where the existing boat ramp access road level crossing is today. No 1 track continued across Bridge Street and behind the fisherman’s homes in Wharf street and terminated in two dead end sidings at the foot of the pier. A transhipment platform was provided here serving both the VR and the narrow-gauge tramway that traversed the Pier.

One broad gauge track entered the Port Phillip sea pilots shed where a small platform was provided. The Pier itself had narrow gauge rails on it and steam ships unloaded their goods into wagons which were hauled to the Pier foot by horses. The passenger platform was provided with portable building until 1881 when the current impressive station building was constructed. Timber station is now unique in Victoria. It features double gables with keyhole fretwork on the Veranda valances and the Veranda itself is cantilevered off tall timber columns.  The curved Veranda supports are recycled rail rumoured to have come from the original 1854 Hobson’s Bay Line, which was Australia’s first steam railway. 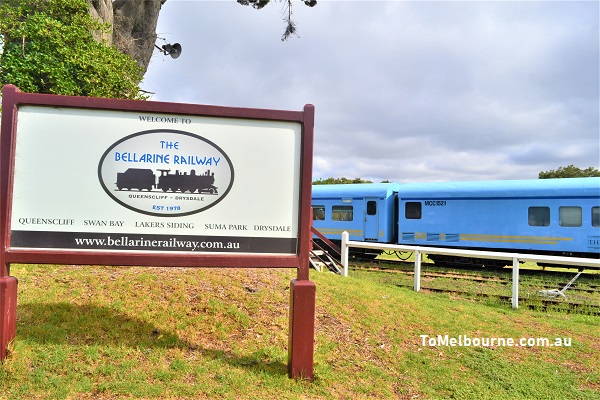 The building also incorporated the station master’s residence. Also, on the platform were the lamp room, Ladies toilets or waiting room and a foot warmer shed.

In the early years of settlement much of the building materials for Fort Queenscliff, The New Royal Hotel and Esplanade Hotel were railed in. A huge amount of fish was dispatched from Queenscliff. Upto and including the 1930’s, an average of 5 wagons a day were fully loaded with Snapper, Couta and Salmon from the 60 fishing boats that called Queenscliff home. Records indicate that in 1926 -27 alone 1500 tons of fish was forwarded to other destinations from Queenscliff.

The daily, year round traffic was reduced until it was terminated in 1931. A bus service run by Woolnough’s from Geelong took care of the passenger needs, although it was still possible for the public to travel by the guards van on the goods trains. This arrangement remained unchanged until the end of Goods Train service in 1973. As well as iced fish, consignments of shell grit and gravel formed bulk of the outward goods. The Swan Island tramway closed in 1958 resulting in the gantry crane being removed. Each summer excursion trains operated from Ballarat and Melbourne throughout the line’s life except during the wars. The line closed to all traffic on 6th November 1976, after the departure of K184 and its chartered passenger train of 8 carriages and 350 people. The Crane and Goods shed occupied the place now taken up the by Boat ramp access road crossing. These Brittannia Cranes were found at number of stations such as Charlton, Portland, Murtoa, Whycheproof, Deniliquin and Kerang. It was used to lift heavy items in and out of wagons and to the timber goods platform located near.

The station was reopened as the headquarters of the Geelong Steam Preservation Society, just a month later in December 1976, where volunteers setup a photo display to raise funds for the line’s re-gauging to 3’6’’ and re-opening. The former Queenscliff Ice works located at the railway land next to engine shed was converted to maintenance facility. Work on locomotives were carried out on No 3 Tracks until covered loco sheds were later built. The exterior of the building is almost completely original. The line between Queenscliff and Lakers Siding was reopened in 19th May 1979, with the Lakers Siding – Drysdale section operating from May 1980. The Bellarine Railway has since then become a tourist icon of Queenscliff and Bellarine and has delighted visitors of all ages with its collection of heritage locomotives and rolling stock. The Station building is on heritage register and has been the location of many TV commercials ranging from Cigarettes to Japanese batteries as well as well as television and movie locations.

Today Bellarine Railway offers heritage train trips between Queenscliff and Drysdale as well as carriage hire, charter trains, the Blue Train and the Day Out with Thomas events.

Bellarine Railway has a current fleet of 11 locomotives, and a number of these are operational at any one time. It has a unique collection of heritage locomotives and roling stock from Western Australia, South Australia, Tasmania, Victoria and Queensland. Bellarine Railway operates nearly 16 km section between Queenscliff and Drysdale. As per information given in Wikipedia, service is available on Sundays, most public holidays, as well as Tuesdays and Thursdays during the Easter, June and September school holidays. During the summer school holidays, trains run every day from Boxing Day until the end of the first week in January, then every day until the Australia Day weekend, except for Mondays and Fridays.