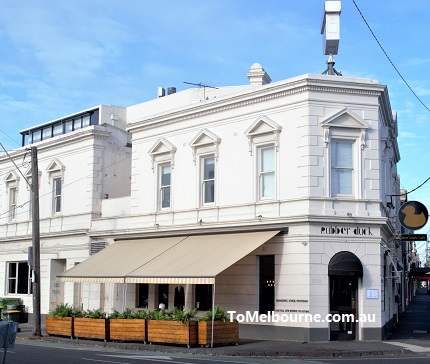 Queens Parade – the boulevard with a shopping precinct with rows of Victorian and Edwardian buildings, represents a bygone era of Gold rush prosperity. Queens Parade has shop houses, civic buildings and corner hotels. Its shop houses are typical two storey structures, highly decorated with stucco mouldings and cast ornaments with narrow and deep ground floor shops with accommodation above. The traders lived above the shops.

In 1887, to commemorate Queen Victoria’s Jubilee, the name of the Heidelberg and Plenty roads, from Smith street to the Northcote bridge was altered to “Queen’s parade”. Originally Queens Parade was part of the track shown in Robert Hoddle’s crown survey of 1837 connecting Melbourne to Heidelberg. Robert Hoddle, the surveyor general of the Port Phillip District, laid it out, as a 60-metre-wide boulevard in the early 1850’s connecting the town to the bush in the North East. It has been the road to Heidelberg since the 1840’s and Hoddle followed the same alignment of the road. Heidelberg on those days was a tourist attraction famous for its views and rural estates. Gold was already discovered in Victoria, opening vistas of prosperity for the newly established town of Melbourne.

The suburb of North Fitzroy was proclaimed on 3rd August 1860. Clement Hodgkinson, Victorian Assistant Commissioner of Crown Lands and Survey was responsible for the subdivision of North Fitzroy and Clifton Hill in 1865 to 1869. Hodgkinson designed the new suburb with Heidelberg Road (Queens Parade) as the main axis, from which the major streets were laid out at right angles. Newfound wealth was pouring into Melbourne from the Gold rush and Queens Parade was soon developed into a major shopping precinct.  Allotments at Queens Parade were sold from 1864, but real growth began after the construction of St John’s Catholic Church in 1876 and Daintons Family hotel in 1875. Queens Parade became the spine of Clifton Hill and Fitzroy North. Much of the present-day buildings were constructed in the 1880’s and after. Cable tram was extended to Queens Parade in 1887, which enhanced its popularity. New businesses were established along Queens Parade.

Every building at Queens Parade has a long history to regale, but due to the limited scope of this article only a few significant buildings will find a mention here.

Former gas works established in 1861 on this site used to supply coal gas to the suburbs of Collingwood and Fitzroy. This 3.9-hectare site sits between three major roads: Smith Street,Queens and Alexandra parades. Victorian Government plans to sell this site for apartment development by 2021.

This presbytery was constructed in 1914 and is part of the St John’s Church complex. 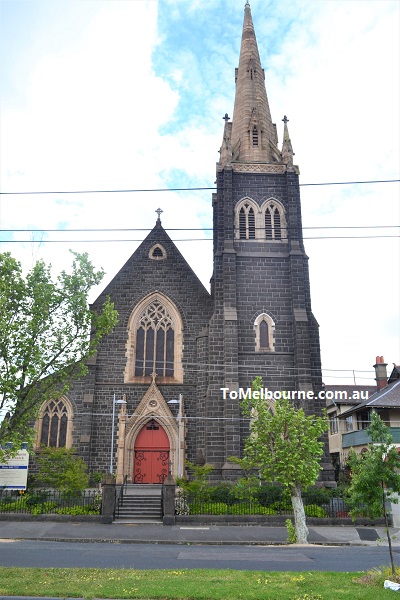 Part of the church complex, this catholic school was built in 1904. 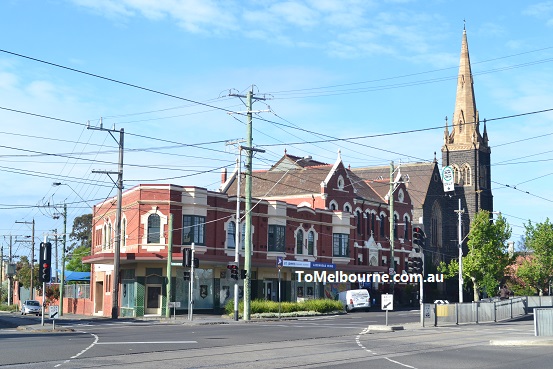 It was built in 1917, after the trustees of the church demolished four shops they owned here, and the parish hall was constructed. In 1918 it was leased for use as a picture theatre and later became an Italian language cinema. 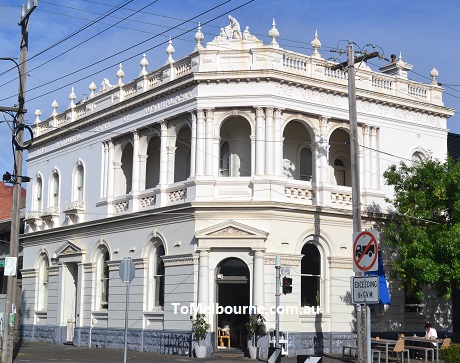 It was Built between 1885 and1887 for National Bank of Australasia by Architects W.A. Tyree, McKenzie & Ballard. The bank manager’s residence atop the bank was accessed from the westernmost door facing Queens Parade. 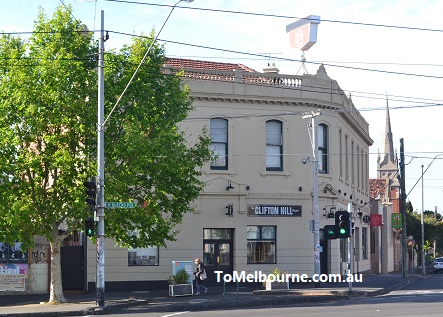 Constructed in 1884. This is a prominent and substantially intact Victorian-era hotel. The hotel is noted for its cast cement string course, motifs on the pediment and window dressings. 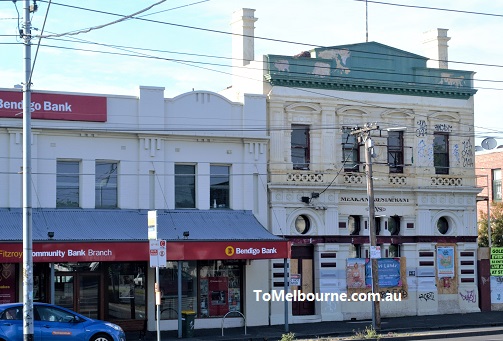 Opened in 1889. It was constructed for the State Savings Bank and is noted for its elaborate Italianate style which includes rusticated pilasters, oculus (round) windows and curved pediments. 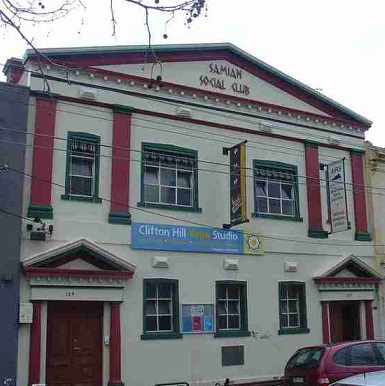 This building was reconstructed in 1927, replacing the former Hall constructed on the site in 1886, which had been bought by the Albert Victor Masonic Lodge in 1919. The building is noted for its neo-classical façade and twin entrances with fluted pilasters supporting pediments above.

Constructed in 1875. The hotel is noted for its corner splay, and elaborate ornamentation.

Constructed in 1883 for a post and telegraph office. This building is typical of shops built in this era, using an Italianate style incorporating a residence atop. This style is contrasted with its later location at 179 Queens Parade. 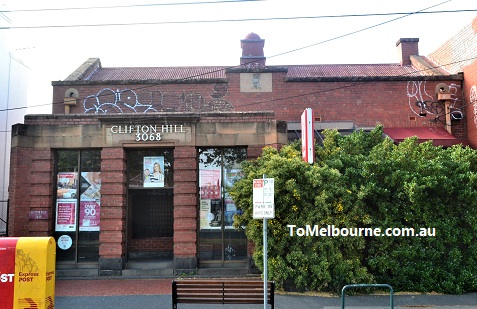 The post office later moved to its current building which is noted for its more restrained design. 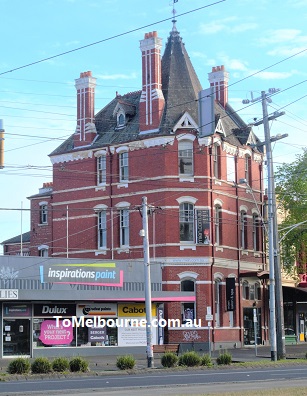 Constructed in 1889 London Chartered bank by architects Oakden Addison and Kemp, the building is listed on Victoria Heritage Register. This is an excellent example of Queen Anne bank architecture. In 1893 the London Chartered Bank became the London Bank of Australia Ltd, and in 1921 it was taken over by the English, Scottish and Australasian Bank Ltd. In 1970 ES&A Bank Ltd merged with ANZ Bank Ltd to form Australia and New Zealand Banking Group Ltd. In the 1970’s the building was occupied by Australia and New Zealand Banking Group Ltd.

This building was constructed in 1936-37 and is considered to be one of Victoria’s most exquisite and intact example of the Jazz Moderne style of architecture. The building is greatly enhanced by its near-island siting and is externally and internally almost original. This building is on the Victorian Heritage Register.

Originally a sawmill and wood yard existed at the site. George and Lindsay Laity purchased the site in 1919. Laity constructed a new brick garage and residence in 1921 and a car showroom in 1926.The frontage was modified by architect J H Wardrop in 1938. J.H Wardrop also designed the nearby United Kingdom Hotel.  The site is on Victorian Heritage Register

This row of Federation houses presents excellent architecture of the era.

Cable tram was extended to Queens Parade in 1887 and at the northern most end of the parade, there are a number of buildings associated with the tram and railway.

Other buildings of significance are 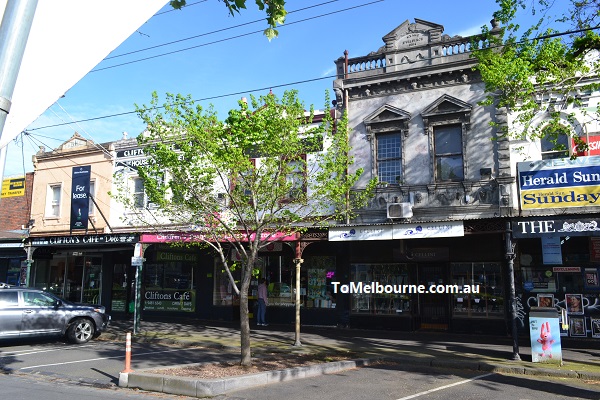 Jeremiah Ryan, a farmer made his money by supplying his produce to the diggers after establishing a farm in Baccus Marsh. In 1881 he sold his farm and invested his money in real estate in Clifton Hill and Fitzroy. 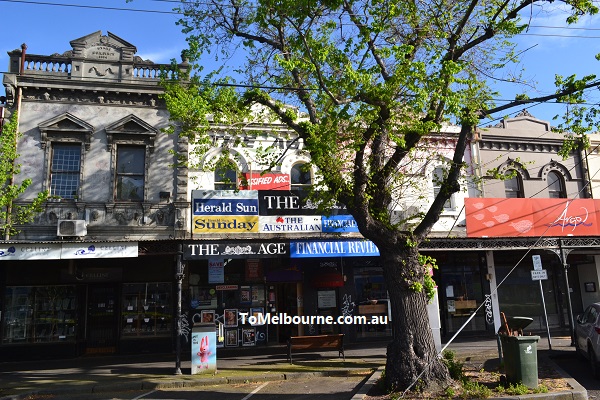 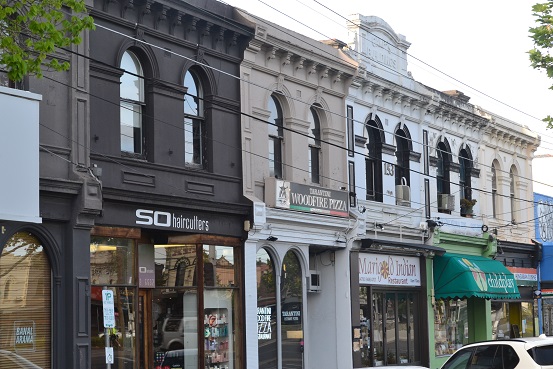 Shop No 141 and the shops at 149-167 in Queens Parade were built progressively between 1883 and 1886 by Abbondio Campi. Abbondio who arrived in Melbourne in 1860, joined his brothers Giovanni and Angelo, arrived in Melbourne before him and established a business manufacturing gold framed mirrors, picture frames and bevelled glass at 122 Russell Street, Melbourne. Abbondio was ruined in the 1890’s recession and majority of his assets were seized by his creditors after his death in 1896.

George Langridge who was a carpenter by trade emigrated to Victoria in 1853 and became a building contractor. He established a building society and in 1885 purchased the sites of 278 and 280 Queens Parade, constructed buildings on them. In 1886 he sold them to Thomas Edward Jones, a bootmaker. 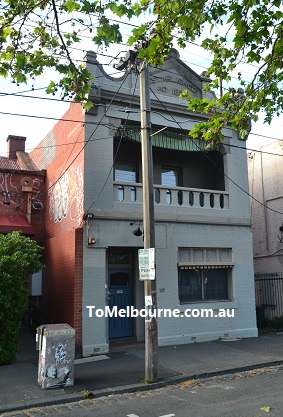 William George Raven (1830–1892) established the undertakers firm of W.G.Raven (now Lonergan and Raven Funerals) in 1856. Number 177 Queens Parade was one of six branch offices of the firm in the 1887. 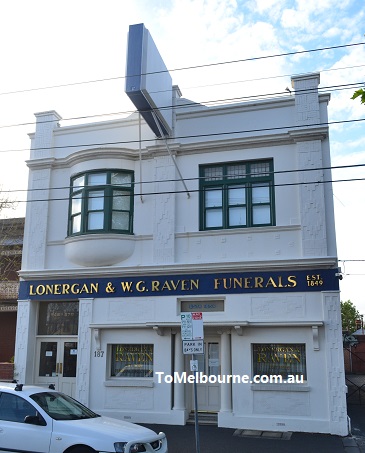 In 1881 Thomas Kimpton purchased 181 Queens Parade, now the site of the Clifton Hill Post Office, from Matthew Devenish. The current building was built between 1911 and 1912 for the Australian Postmaster General. 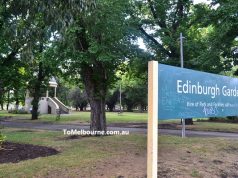 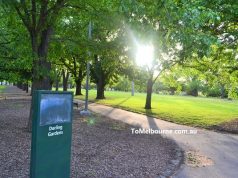 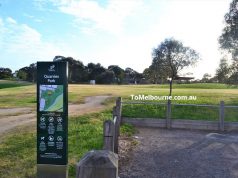 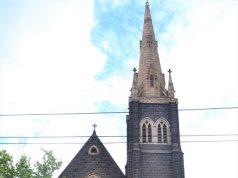