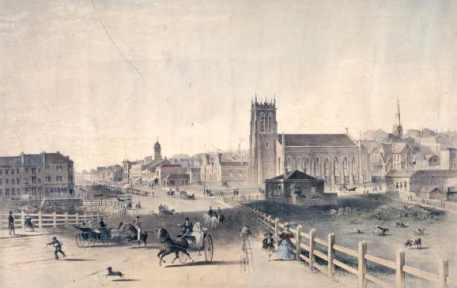 Princes Bridge is an iconic structure for People of Melbourne due to its position as an extension of Swanston Street connecting to St Kilda Road for crossing the Yarra River. The Bridge is named after, Prince of Wales, later King Edward VII. The area is often used for cultural and sporting events because of its proximity to Flinders Street Station and Federation Square.

In the early days of European settlement in Melbourne, a rope hauled punt carried people across Yarra River. The call for building a bridge across Yarra was gaining momentum on those days. The company that owned the punt service across Yarra, transformed itself into “Melbourne Punt and Bridge Company” with a capital of £5000, for the purpose of building a bridge in 1840, with D.C. McArthur as secretary and John Augustus Manton as engineer. Manton tendered for an Iron Suspension bridge at a cost of £4500. This project did not materialise owing to the difficulty in agreeing on a suitable site for the bridge. Which of the streets – Elizabeth, Swanston, Queen and Market should have the bridge connecting to the other side of Yarra, was the question. Traders at Swanston and Elizabeth formed two rival parties arguing for the bridge to be on their side of the road. But the NSW Government was favouring a Swanston Street bridge and based on that Melbourne Town Council went for a temporary bridge across Yarra spanning from the foot of Swanston Street.  Alex Sutherland won the tender to build the bridge at a cost of £400. This was a wooden structure 120 feet in length, with a roadway of width 17feet and a foot path one side of 4feet. He made a loss of £130 building the bridge.

In 1845 the timber bridge was completed, which was a toll bridge. The bridge was leased to Melbourne Bridge Company, in the name of Robert A Balbirnie. The toll house  was at the north side of the river and the toll keeper was Patrick Doherty. Doherty was credited of saving nine lives during the 4 years he was the in charge of the toll station.

Soon after the completion of the bridge, it was decided by the authorities to replace it with a stone bridge. 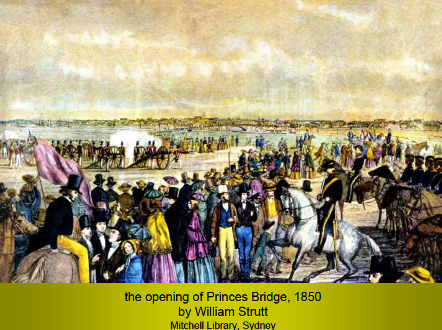 David Lennox, an engineer from London was called in and he recommended it to be a bridge of one arc, with a span of 150ft. Competitive designs were called for and the design and supervision of the bridge was awarded to Charles Laing, the second surveyor of Melbourne. Patrick Reed built the bridge under Lennox’s supervision, the foundations stone was laid on 20th March 1846 and the bridge was opened on 15th November 1850. Victoria was about to become a separate colony and that rejoiceful occasion made the opening of the bridge a real celebration for the Melbournians. The opening ceremony was described as the grandest processional display witnessed in the colony.

Lieutenant Governor Charles Latrobe bestowed the name, Prince’s bridge when he laid the foundation stone, in honour of then Princes of Wales who later became King Edward VII. The design of the bridge was an elliptical single arc, exceedingly small rise in proportion to the span. The design of the bridge created an obstacle for flood waters to pass and Melbourne’s increasing population called for a new bridge to accommodate the increased traffic.

A decision was made to replace the existing bridge with a new one. In June 1883, tenders were called but the asking price was much higher than that of departmental estimate. So fresh tenders were invited on 1885 and on 16th November 1885, lower tender submitted by David Monro and Company for £136,998, including the use of material of the old bridge was accepted. The structure was decided to have three arches each 96 feet wide measured across the stream. The cost of the bridge was divided between different parties. The Government paid one third, the city of Melbourne one third, South Melbourne, Prahran and St Kilda £10,000 each, Malvern £2500, Caulfield and Brighton each £2000 and Moorabbin £1000 .

Competitive designs for a new bridge was called. Design submitted by Jenkins and Grainger were accepted. The banks on both sides were raised to allow more space for flood water to flow. The St Kilda Road was originally many feet below the current level.

The laying of foundation stone took place on 7th September 1886 and stone was laid by Lady Mayoress. The bluestones were quarried from Footscray, the Malmsbury stones were obtained from the quarries of Monro and Co at Keyneton and the granite from a quarry at Harcourt.

The new Princes Bridge was opened on 4th October 1888, by John Nimmo, Minister of Public Works. There was no public ceremony to mark the occasion as the Governor had already driven across the bridge on 1st August of that year at the invitation of the contractors for the opening of the centennial exhibition. The bridge’s name was supposed to be Prince’s Bridge, but it was officially spelt Princes Bridge without the apostrophe.

More than 130 years after its construction, Princes bridge still stands as Melbourne’s grandest bridge and as an important and prominent landmark.