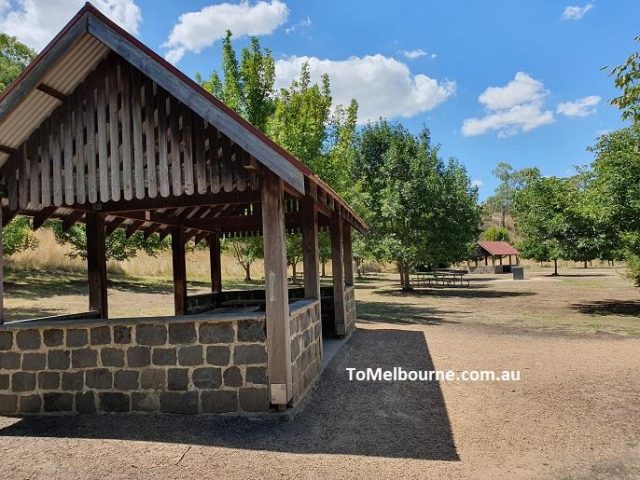 Situated 20km north of Melbourne CBD, Plenty Gorge Park offers a wide range of natural landscapes that will satisfy any enthusiast of mother nature. The 1350-hectare parkland extends 11km along Plenty River from Mernda to Bundoora in Melbourne. The park has native wildlife, walking tracks, picnic areas, a beautiful gorge, blue lake and the Plenty River passing through it. The basalt on the west and sedimentary rock on the eastern side make an important refuge for wildlife. The park benefits the residents of Mill Park, Mernda, South Morang, Bundoora, University Hill and Doreen. It is estimated that more than 200,000 people visit the park each year.

The park is home to different types of landscapes. At the north of the park, the Plenty River flows through a relatively shallow valley, but around 2km down stream of Merna it became a deep and steep sided gorge. The park also comprises wooded slopes and plateau areas giving the impression of a forested area. The grassy pasture at the park provides an excellent opportunity for visitors to engage in community gatherings and participate in games.

A range of picnic and BBQ facilities are available at the park. The Red Gum Picnic area has children’s playground, picnic tables and toilet facilities suitable for the disabled. Walking tracks from the car park leads to the Morang Wetlands, Hawkstowe Picnic Area and Le Page Homestead.

The Hawkstowe picnic ground is home to Le Page homestead, barn and stables. Electric BBQ and picnic shelters are available here. Toilet facility is provided behind Le Page Homestead. The walking tracks take the visitor to the picturesque wetlands enjoying the views of its wildlife.

The Yellow Gum recreational area has toilets, BBQ facility and places for lookout. The blue lake can be seen from the viewing platform along the walking track to the lake. Dogs are not permitted to enter the Yellow Gum Recreational area as a measure to the protect the wildlife.

The Nokia Bush camp which covers nearly 1.2 hectares is a perfect place for large groups to stay in the bush overnight. This is only available to school groups and incorporated community organisations. Roofed accommodation, camp kitchen and hall are all available to book. As per the Parks Victoria website one can book the campground only, the campground with camp kitchen and hall, bunkhouse only or bunkhouse and campground. The bunkhouse comes with the camp kitchen. Facilities include toilets, hot showers, hall, kitchen, bunked accommodation as well as a camping area for tents. Access to Nokia Bush Camp is off Gordons Road via Plenty Road in South Morang.

Middle Gorge picnic area has spectacular views of the Gorge and the river from both the carpark viewing platform and walking tracks that lead from the carpark. Picnic facilities are located north on adjacent council parkland along the Plenty River, these can be reached by following the walking track or driving a further 500m north along Gorge Road (This information is from Parks Victoria Brochure)

Yarrambat picnic area has spectacular views of Kinglake National Park and Mt Disappointment. There are plenty of wide-open spaces for playing games or walking dogs on leash. Electric BBQ, Picnic tables, picnic shelter and toilets are near the carpark.

Dogs are not permitted on most of the Plenty Gorge Park but at three specific areas they are allowed on leash.

How to reach there?

To get to the Park Office and Red Gum and Hawkstowe picnic area, taken the Plenty Road exit at Western Ring Road and then follow Plenty Road north to Gordons Road. Turn right and the park entrance is 100m on the left.

The history of Plenty Valley

Plenty Valley was among the first settled landscapes of Port Phillip District. Probably it got the name ‘Plenty’ as there was plenty of land, plenty of water and plenty of game.

After the European settlement of Melbourne, by 1837, squatters took over large tracts of land for their sheep and cattle. By 1841, the area was proclaimed as settled district within Port Phillip. Later the land in the area was sold by Government to mostly absentee landlords. The land was gradually turned into agriculture land and by the 1840’s two water powered flour mills were in operation: Willis (Carome) Mill and Coulstocks (Janefield) Mill. Timber and Basalt found plentiful in the area were used to construct houses. In the 1850’s gold was found in Victoria and Plenty Road being the major route to Northeastern goldfields of Victoria, the area flourished due to trade. This also resulted in the development of townships. Janefield area and Plenty Gorge area are the only two documented gold mining areas of Plenty. The Black Thursday bushfires of 1851, rocked the area causing loss of cattle, produce and lives.

The construction of Yan Yean Reservoir between 1853-57 resulted in the large-scale settlement of workers and their families engaged in the construction of the reservoir, the area. The 1870’s saw, orchards coming up east of the Plenty River and diary industry commencing at Yan Yean. The Coulstocks mill was closed during this period due to the shortage of water after Yan Yean Reservoir was built.

In the late 1870’s Yan yean water catchment area was closed to the timber industry. This effected the trade and prosperity of the region. But the fruit industry picked up compensating for the loss.

Parks Victoria purchased this homestead in 1986. Homestead is believed to be built in the 1850’s for Peter Le Page. Hawkstowe Picnic area was part of the large farm established by the Le Page family. Peter Le Page arrived in Australia from Guernsey in the Channel Islands in 1852. He came to South Morang in 1855. He married Emily Edwards in 1865 and had 7 children at the property which was called Hawkstowe at that time. He eventually owned 200 acres of farmland in the area. After Peter Le Page’s death at the age of 92, his son C.P. Le Page inherited Hawkstowe. It remained with the family until the 1940’s when it was purchased by Mr Cotter. ( The information was accessed from https://wikinorthia.net.au/history-of-hawkstowe-park/)