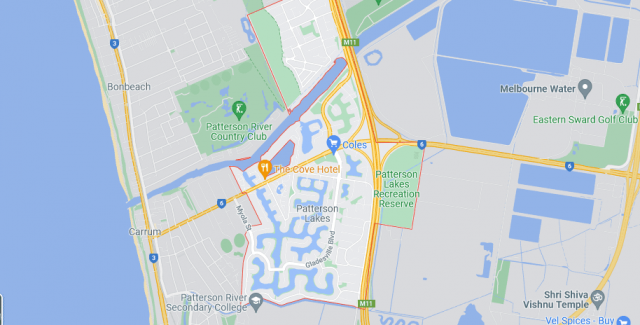 Patterson River, the partly man-made river is nearly 5km in length and is located around 28km southeast of Melbourne CBD. After the survey of Carrum Carrum Swamp which stretched over 11,000 acres between Mordialloc and Frankston in 1866 by T C Rawlinson, the land between Mordialloc Creek and Seaford were divided into 18 allotments and sold by auction.  When the Government opened the swamp area for selection in 1871, the focus was on reclaiming the land for agriculture and housing. After the earlier attempts to drain it became ineffective, in 1879, it was decided to cut a 10m wide channel to the sea. It came to be known as Patterson Cut, named after Sir James Patterson, the Victorian Minister for Public works, during that period. A flood that happened few years later made the cut much wider and Patterson’s Cut later came to be known as Patterson River. Before the Patterson’s cut was made the only exit for Carrum Swamp to the sea were, Mordialloc Creek at Mordialloc and Kananook Creek at Frankston. The area suffered floods even after the cut was made; the memorable one being in 1934. Over the years many drainages work had been done in the area to fix the flood menace.

Dandenong Creek and Eumemmerring Creek, both originating in the Dandenong Ranges confluence at southwest of Bangholme along Mc Mahens Road to form Patterson River. From this confluence point to the where it joins the sea at Carrum, the water body is called Patterson River.

Patterson River is a popular boating gateway to Port Phillip Bay. The river area has four two lane boat ramps and a large car and trailer parking area. Its development from a swamp to pastoral property to a lifestyle destination had been a slow and gradual process.

In 1918, Alfred Turner Priestley bought 170 acres of pastoral land north and west of Patterson River, after seeing it on a holiday trip with family in 1913. He established a diary farm on its northern side and in 1926 Priestly established a golf course and clubhouse. The Golf Course and Club house were sold in 1947.  In 1966, the Priestley family established a dry dock marina in the area.  In 1988, the farm and the marina were sold.

The preliminary stages of development of Patterson Lakes began in the early 1970s. Civil Engineers Donald Cameron Consultants and Gladesville Developments began work on converting 400 hectares of land on McCleod Road in Carrum to residential allotments, each with a waterfront. Patterson Lakes attracted the attention of conservationists because of the massive earthworks required and the engineering required to maintain water quality in the lakes. Landscape architect Glen Wilson was engaged in 1972 and immediately set up a plant nursery to support the landscaping of the site. His landscape proposal included the recommendation of an upper canopy of native vegetation, a design initiative that has eroded over time but still evident in earlier stages of subdivision. (Making Landscape Architecture in Australia by Andrew Saniga).

Recreational Facilities for the public near Patterson River

To the west of Launching Way, there are picnic shelters and barbecues and at the east end of the car park near Ramp 4 there are toilets and a sheltered wheelchair-friendly picnic area.

Fishing along Patterson River is permitted for license holders.

How to Get there?

Frankston train line to Carrum Station is conveniently located right next to the mouth of Patterson River, where National Water Sports Centre is located. 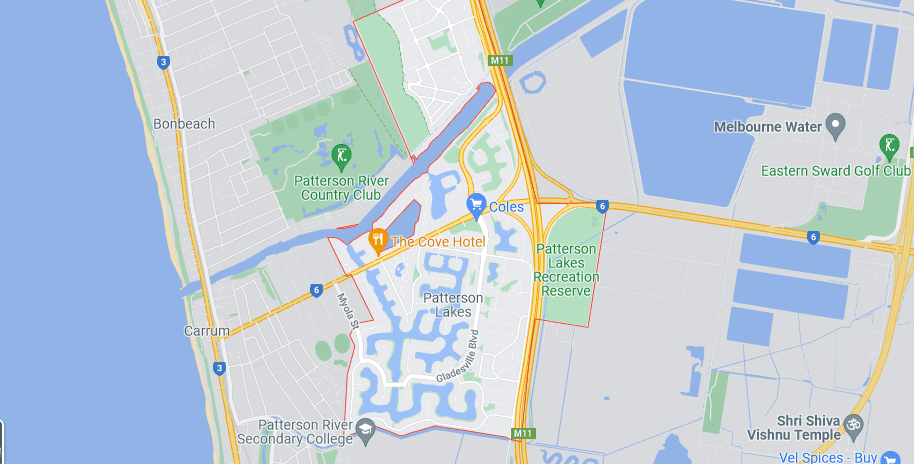