Organ Pipes National Park is situated 20km north west of Melbourne just off the Calder Freeway. The park covers an area of around 300 acres.  This area was reserved as a national park due to its striking geological features; the denuded landscape has been gradually replanted and restored over many years. Millions of years ago volcanic lava flowed over covering everything in its wake creating spectacular rock formations. 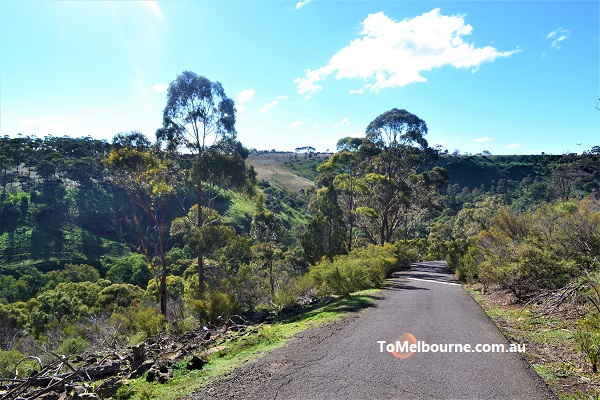 Kurnung Willam Balluck people frequented this area before the arrival of the Europeans. Europeans turned it into an agricultural land growing wheat, oats and Barley. This was dedicated as a national park in 1972.

This park is also considered as a valuable wildlife refuge. Though very difficult to spot, eastern grey Kangaroo, sugar gliders, swamp Wallabies and Possums are believed to inhabit in this area. Platypus are found in the creek that flows through it.

The attractions here include: Rosette Rocks, a strange rock formation that resembles spokes of a wheel; Organ Pipes, columns of Basalt formed from a long-gone volcano and tessellated pavement, tops of basalt columns filed down by the creek.

Jacksons Creek, a tributary of Maribyrnong River rises in the wombat forest and flows east of Roslynne Reservoir. From there it flows through Gisborne, Sunbury and then meanders through the Organ Pipes National Park to its confluence with Deep Creek near Sydenham Park.

The Park is in a rain shadow, receiving an average 580mm of rain per year, which creates dry and relatives harsh environment. However high rainfall during winter and spring can create flooding in Jacksons Creek.

What you can do here

This is a great place for quite picnicking. Picnic tables and toilets are available next to the car park and near the Organ Pipe lookout. You can bring your gas BBQ but wood fires are not permitted.

Walk though the walking tracks viewing the wonderful rock formations of the park and along the Jacksons creek. It may take around 1.5 hours.

Park is open to vehicles every day from 8.30am to 4. 30pm.During daylight saving, the opening hours are extended to 6:00pm.