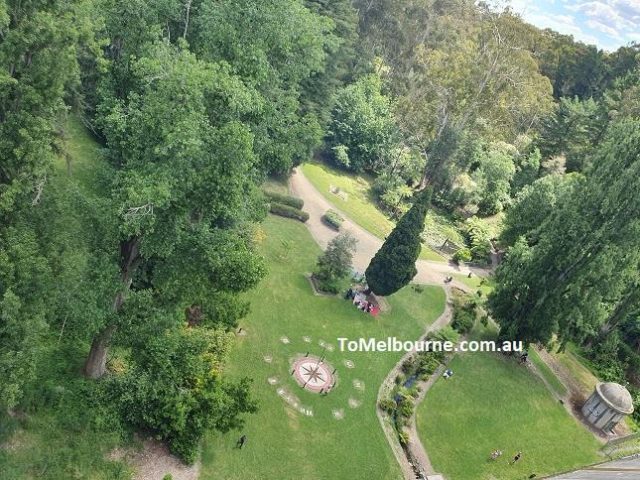 Maroondah Reservoir Park is located 69km northeast of Melbourne CBD in the township of Healesville. Arguably, this is one of Melbourne’s best picnic locations. Healesville is located at the foothills of Yarra Ranges. The Major attraction of the park is the 41metre high dam built over Watts River, which rises below Mount Vinegar within the Yarra Ranges and the English style landscaped gardens. Watts river is impounded by Maroondah dam to create 22,000 megalitre Maroondah Reservoir. The reservoir has a water catchment area of 10,400 hectares. The water from the reservoir is transferred to Sugarloaf reservoir and then to some north easter suburbs, western suburbs and central city area.  The Dam construction began in 1920 and was completed in 1927.

Major attractions of Maroondah Reservoir Park apart from the dam wall, are the gardens, historic domed valve houses and the Stone paved rose stairway. There are many walking trails in the park.

As mentioned earlier, this is a perfect spot for a family picnic with shelters, BBQ facility (both gas and electric), picnic tables and rotundas. A walk along the dam wall enjoying the scenery around adds perfection to a family trip. Tall Eucalyptus trees and other exotic trees adds beauty to the garden around especially in the autumn. When the spillway overflows, that sets the stage for the look and feel of a mighty waterfall.

The entry gate for the reservoir park is on the Maroondah Highway, 3km east of Healesville.

An extensive network of paths and walking tracks caters for those who want to explore on foot and enjoy the views from the dam wall and lookout point.

Track begins from the information shelter located north of the main carpark area. Climb the Rose Stairway to reach the dam wall to enjoy the spectacular views of the lookout. For those who have difficulty climbing steps, from the eastern end of the carpark bitumen walking track can be accessed which takes to the dam wall.

This track connects the Lookout to Henderson’s Picnic Area via a pleasant forest walk.

This scenic walk starts at the top carpark. Winding through grassed areas with large exotic trees and spectacular views of the surrounding mountains the track eventually reaching the top of the dam wall.

This track leaves Henderson’s Picnic Area at the footbridge over the Watts River. It climbs to the top of Henderson’s Hill and back down to the access road, which goes from Maroondah to Donnellys Weir. A walk to Henderson’s Hill is more challenging as it incorporates some steep inclines and passes through a variety of forest types. After completing the walk one can choose to go  further to Echo Tunnel and Donnelly’s Weir.

Opening Time: The park is open every day of the year. Gates open 8.30am. Please observe park

closing signs or call the Parks Victoria Information Centre on 13 1963 or visit www.parkweb.vic.gov.au.

For disabled visitors, the park has wheelchair access on all facilities. Car and Bus access to the top of the dam wall can be arranged with the park ranger.

Other restrictions in the Park

Dogs must be on lead all times. North of the Watts River and Dam wall are no go zone for dogs.

Feeding birds and wildlife are prohibited. All native plants and animals are protected.

Fires are permitted only in Fireplaces provided.

Particulars of the Reservoir

Total height of the dam: 135feet above riverbed

Thickness of the dam at the base: 104 feet

Thickness of the dam at the top: 16 feet

The construction of Maroondah Reservoir Dam brought considerable number of people to Healesville. Following the completion of the Dam in 1927, a small area of current park was developed using the dam wall, spillway, and valve houses as major features. Following the landscaping trends of those years, the earliest gardens were planned using traditional English designs. This influence is still evident in green lawns, flower beds and planting of deciduous trees and conifers in the area immediately below the dam wall.

The north facing slope which lies between the Maroondah Highway and the dam wall was developed as an exotic woodland in the years immediately following the completion of the dam. A wide variety of species were planted including Bunya Pine, Cork oak, California Redwood and Norway spruce.

During the mid to late 1940s, considerable beautification of the park was undertaken. Much of the stonework which is seen in the park today was laid during this time including the upper section of the rose steps. The lower section was completed at an earlier date.

During the second world war the park was closed to the public for security reasons. The wall and reserve were patrolled to guard against enemy attacks or sabotage.

The early 1950s saw a spate of landscaping activity occur. The sundial which is located immediately below the dam wall was built in late 1952 by Bruce Duscher – caretaker of the park, employed by the Melbourne and Metropolitan Board of Works. The number 8 was left off the dial because the sun’s rays are obscured at this time of the morning and evening.

The park was once smaller than it is now. The western boundary of the park used to be where the main car park and formal gardens currently set. The area to the west of the boundary was owned by Henderson family. They ran a camping ground and a kiosk.

Henderson Kiosk occupied the site of the current kiosk and the campground was located where the main carpark is now. In 1951 MMBW was offered the opportunity to purchase Henderson’s property. It was not until 1972, the park was extended to include Henderson’s property. Retaining much of the remnant cover of Manna Gums and Swamp Gums, the area became known as Henderson’s picnic area.

In 1879, Surveyor J.H. Davies was commissioned by Water Supply Board to undertake a survey of Watts River and its tributaries. His suggestion was to construct either a diversion weir or a dam across the Watts River valley. In 1885, Water Supply Board decided to build a diversion weir upstream from the proposed dam site, which came to be known as Watts River Scheme and the construction began in 1886. It was completed and opened on 18th February 1891 by Governor of Victoria, The Earl of Hopetoun.  The Governor renamed the new system ‘Maroondah’.

The System constituted of 12 tunnels and 51km of aqueduct to Preston. To protect the water supply, then the Board of Works acquired all properties within the catchment boundaries. To enable this, the entire settlement of Fernshaw was purchased in 1890 and what was not sold and removed was razed in a bonfire in May of that year.

It formed the second part of Melbourne’s water supply system. Yan Yean Reservoir being the first having been completed in 1857. The name Maroondah didn’t come from the Wurundjeri but from the Parrapa people of Loddon district. William Barrack the last headman of the Wurundjeri who have inhibited the Yarra lands informed the authorities that the proper name was ‘Burngothalk’ meaning rotten log.

Despite this the authorities persisted with promoting falsehood that Maroondah was the indigenous name resulting in the Watts River being changed to Maroondah River. However, it seems that popular usage did not accept the new name. Watts was formally restored as name of the river in the 1900s. although Maroondah remained firmly attached to the water storage and distribution system.

In 1893 Donnellys Creek Weir was constructed to divert water to Maroondah Aqueduct. In 1905, Construction of Badger Creek Weir began. Upon completion in January 1909, this scheme was named ‘Coranderrk’ after the nearby Aboriginal reserve.

In 1909, Victorian Government appointed a Royal Commission to decide on the alternative options of either building a reservoir at Maroondah or a diversion weir on O Shannassy River. Though the commission favoured O’Shannassy Scheme, it also recognised the need for a reservoir at Watts River. In 1915, Geological exploratory work commenced for the proposed dam at Healesville. Site clearing work was done in 1917 and Watts River diversion work was completed in November 1919.

The construction of the reservoir began in 1920. The dam was built between 1920 -27 submerging the original weir. The aqueduct was enlarged accordingly.  In 1981 a program to upgrade the dam to provide safety factor for conditions of extreme flooding was implemented. 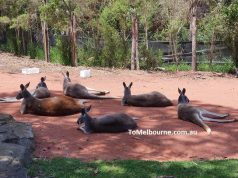