Kyneton is located 89 km north-west of Melbourne on the Calder Highway, 509 metres above sealevel. The first known European to pass through Kyneton was Major Mitchell in September 1836, when he blazed a trail from Sydney to Melbourne crossing the Campaspe river. He named the river, ‘Campaspe’ after one of Alexander the Great’s courtesans. Kyneton is surrounded by undulating hills: Black Hill, Red Hill, Green Hill and many other rocky outcrops including the Hanging Rocks at Woodend.

In May 1837, Charles Hotson Ebden, sent nearly 10,000 sheep from his Goulburn station to form the first sheep station north of the Dividing Range becoming the first squatter. He named his station as ‘Karlsruhe’ station. Other squatters soon followed.

In 1839, when Carlsruhe pastoral run was split and the area around today’s Kyneton formed St Agnus run. In the mid 1840’s the leasehold was transferred to Henry Jeffreys who was connected to Lieutenant Governor Charles La Trobe.

Kyneton was chosen as a townsite in 1848 and was surveyed the next year.  The Lieutenant Governor sent a surveyor to mark out a camping ground for the teamsters on the road between Melbourne and Bendigo. This camp was not to be too close to Carlsruhe, which was an important camping ground on those days. Finally, a suitable place was found. He called at the homestead of Mr Jeffreys on whose run the camping site had been selected. Mrs Jeffrey said, As the position is on my husband’s run, I should be allowed to name the new settlement. She named it after her birthplace in England, “Kineton”, which means royal town. The local Post Office, known as Mount Macedon, was renamed Kyneton in 1854.

Kyneton grew as an agriculture centre due to the demand for food in digging areas and in its early days of existence wheat was the main crop.  As a result, there was a vigorous expansion in the milling area in the 1850’s. Loss of market, saw a downturn in the industry within a decade. The Former Willis Flour Mill, built by Frederick Castilla in 1862 in Piper Street,still stands as a monument to those days.

Kyneton was first occupied by squatters and then teamsters. History of Kyneton in its early days were one of steady progress and Its position as the halfway house between Bendigo goldfields only enhanced its prosperity. Kyneton grew as a service town to Goldfields. The railway link from Melbourne arrived in 1862.

In the 1850’s Caroline Chisholm arrived in Australia who tirelessly worked to lessen the miseries of immigrants. At her behest the Victorian Government built shelter sheds all the way to the diggings in 1854-55. By the middle of the 1850’s she was a resident of Kyneton and her family owned a store. She began to establish inexpensive overnight shelters for travellers on Calder Highway (Then Mt Alexander Road).

In 1933, “The Australian” published an article “Some Kyneton History” which details the experiences of a traveller named Kish Guy who sent a letter to his parents in March 1858.

“I slept at the Malmsbury shelter-shed. These shelters are five or six miles apart all up the Mt. Alexander road from Melbourne. They were built by or at the suggestion of the celebrated Mrs. Chisholm for the accommodation of newly arrived immigrants and others. It is a long building, divided into three compartments, the middle one being the kitchen and sitting room: one end is the bedroom of the family who keeps it, and the other end is the dormitory of the lodgers. This division, with regard to comfort, is much inferior to an English barn. Down each side is ranged a row of strange-looking machines they call bedsteads. By paying 6d. you may lay on the floor, but by paying 1/ you are admitted to the luxury of placing yourself on one of the aforesaid machines. But you soon find it is by no means the kind of thing to rest your bones upon, there being no bed-unless you call a canvas bag with a hatful of straw in it a bed. It is impossible to fall out, for if you rolled off your own you must roll on -to somebody else’s-an occurrence not desirable when a person sleeps, as I did one night, with a repulsive Chinaman on one side and a more disgusting nigger on the other.”

Nevertheless, Madam’s sheds kept the weather off many a man in those comfortless times.”

China mugs bearing the picture of her bearing the words, “Caroline Chisholm, the emigrant’s friend” were commonly in use in the fifties.

Victoria’s first pasteurizing plant was opened in Kyneton in the 1890’s.

History of the river: The aborigines named it Yelka and was renamed by Thomas Mitchell as Campaspe in 1836, after Alexander the Great’s concubine.

There are various points of interest along the walk like, Botanical Gardens, Railway weir, Platypus Habitat and sculpture park. The Sculpture park was opened in 2008 with sculptures donated by local artists.

History: Situated at the banks of Campaspe River, around 18 acres were reserved for a garden in 1858 and after many additions, currently it is 24 acres. Compared to other Victorian Botanic Gardens, this is much inferior in layout and beauty.

This 2km walk will take you through 9 mosaic sites in Kyneton.

At 67 Piper Street, the museum operates in a heritage listed building built on 1856 as  Bank of New South Wales. Museum operates from Friday to Sunday between 11am – 4pm and can be opened by prior appointment for group tours.

Town walk and the historical buildings

The historical buildings of Kyneton are located mainly on Mollison Street, Piper street and Ebden Street

Shire Hall and Offices:  The three southern bays of the front façade were built on 1877-78 and the present front completed on 1929.

Former State Savings Bank: This building was erected in 1884. Now this is a veterinary surgery.

Former State Bank of Victoria:  This 1876 building is built in Italian Palazzo style.

Post Office Building: Built in 1871, Post Office which was previously located at Piper Street was moved to this building.

National Australia Bank: Building designed by Terry and Oakden was opened in 1877.

Albion Hotel: Built in 1861, this historic hotel was renovated many times during its life. In 1988 it was completely renovated.

Railway Station: Built in 1861, this was the largest bluestone Railway station in Australia.

Primary School: Built in 1856, this is one of the oldest Schools in Victoria and was a National School.

Former Kyneton Hospital: The building was finished in 1855 and began operating as a hospital in 1857.

Court House: The courthouse was built from local bluestone in 1857. Young Ned Kelly was charged at this courthouse.

St Paul’s Church of England: This bluestone church was built in 1855 and is one of the oldest Churches in Victoria with a tower.

Our Lady of the Rosary: It was built in 1857. The bluestone was cut on the site and the church was built over a quarry.

Kyneton Museum: Built for Bank of NSW in 1855-56, is one of the oldest bank buildings in Victoria. This is now a museum and within the museum compound is Theadon, a squatter home from the period of 1837-50

Royal George Hotel: Built close to 1855, this began its life as Gold Diggers Arms Hotel. The Western bluestone half of the building was completed prior to 1860 and the Eastern brick half in 1891.

Old Steam Mill: This was built in 1862 by Frederick Castella which was sold to Willis Family in 1898.

Old Market: Original market building was erected in 1878. It was altered and renovated in 1912 to become a technical School. Then it become Brass Bed factory until it was destroyed by fire in 1994. The front façade has been retained. Now this serves as a fruit and vegetable market.

Former Church of England Rectory: This is a private home and was built in 1850.

Kyneton Mineral Springs is 3 km north-west of the town on Burton Avenue. Good quality mineral water can be pumped free of charge. The Mineral Springs Park has picnic tables, bbq and toilet facilities.

Other places of interests close by

Hanging Rocks at Woodend is 18km from Kyneton

Turpins Falls at Langley is just 14km from Kyneton

There are many wineries in the area 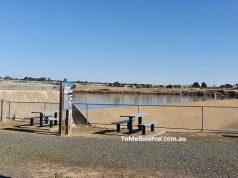