Kororoit Creek is a significant waterway within Melbourne’s north and west and stretches nearly 80km and has a catchment area of nearly 190 square kilometres. In the 1850’s the waterway was also known as Tea Tree Creek due to the presence of wooly tea trees in its banks. The name ‘Kororoit’ is believed to have come from the Aboriginal word meaning male kangaroo. Another possibility is that it came from the aboriginal word “Koort-boork-boork”, meaning ‘She-Oak Tree.

The aborigines considered that the land owned them which was significantly different from the Western concept of owning the land. The land around the creek was inhabited by Wurundjeri, Bunurong and Taungeroung people and the creek was culturally significant for them. The Creek being in the  basalt  plain, the area was mostly covered with grassland. For the European settlers, the creek was an important source of freshwater but as Industries started springing up around the creek, pollution became a major issue.

The creek rises from Mt Aitken, north east of Gisborne and flows south past Rockbank, Deer Park and Sunshine and winds through Ardeer, Tottenham, Brooklyn and flows to the sea at Altona Bay between Altona and Williamstown. The creek passes through diverse range of landscapes. Some of it like Rockbank that were until recently considered rural have become new suburbs of Metropolitan Melbourne. From Rockbank the creek passes through fast growing areas like Caroline Springs and Burnside before passing through long established suburbs like Deer Park. The creek then passes under the Western Ring Road and through the suburbs of Ardeer and Sunshine to reach the industrialised suburbs of Brooklyn and Altona North. Before entering Port Phillip Bay, the creek passes under Millers Road into Altona Coastal Park and then the Jawbone Marine Sanctuary Park forming part of the rich mangrove and saltmarsh habitats.

Some of Melbourne’s now heritage listed bridges were built across the creek in the 1850’s and 60’s. The Bluestone Bridge was built in Brooklyn for the diggers to cross the creek to reach Ballarat. The bridge over the Kororoit Creek, Melton Highway was associated with one of Victoria’s primary early roads from Melbourne to Portland and was the main coach road between Melbourne and Ballarat until replaced by the railways in 1889. 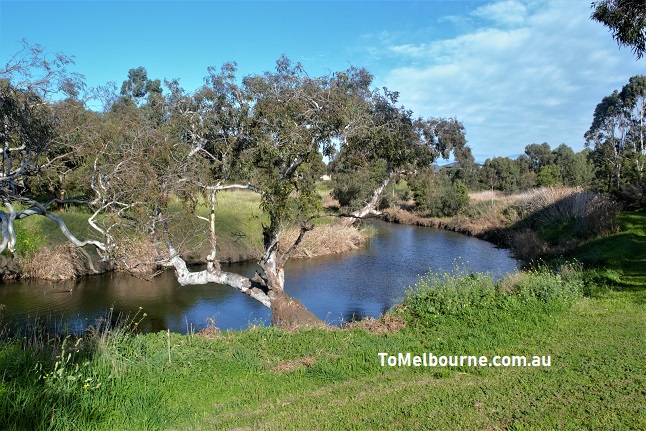 Nearly 22km in length, creek trail is a shared path for cyclists and pedestrians along the Kororoit Creek.