The Melbourne suburb of Sunshine is located 12km west of Melbourne CBD within the City of Brimbank. Sunshine is part of the Volcanic plains of Melbourne’s west that once spread as long as the eyes could see as most of it were treeless plain.

After the European arrival in Melbourne, the landscape today known as Sunshine began its life as a Road district. Pursuant to a legislation passed in Victoria in 1853, a public meeting was held in 1860 to decide about the establishment of a Road District in the area. Braybrook Road District was proclaimed on 28th May 1860 which extended from West Melbourne Swamp upto Melton and Office bearers were selected. The board was responsible for the building and maintenance of local roads and bridges and raised finance from rates levied on landowners. On 23 January 1871, the Road District was made a shire, with the shire council having meetings in Maidstone. Braybrook shire stretched from Footscray until Melton; the major townships being, Albion (Now North Sunshine), Braybrook, Maidstone and Koroit Creek (Deer Park) .

In the 1880’s Victorian Government decided to build a direct line through Bacchus Marsh towards Ballan and Ballarat. The railway branched from the existing Bendigo line at Today’s Sunshine. A Railway station was established and opened for service on 7th September 1885, at the junction and was named Braybrook Junction Station. The nearby village of Braybrook was named after a place in Kent, England.

Town allotments were sold at Braybrook Junction in 1886. In1888, Messrs G. and I. G. Johnson and G. P. Mills purchased 133 acres of land from Joseph Solomon on the Koroit Creek. In 1889, the estate was surveyed and laid out by Walter Madden, and the Yan Yean water supply was brought to the property. Around that time, the Railway Department secured large additions to the station yard to establish a depot, so that the country trains arriving at Braybrook Junction could be broken up and their goods distributed from that point, instead of from Spencer street.

Wright and Edwards Limited established a new workshop near the station at the Braybrook Junction Estate, to build railway carriages. The company previously was supplying the iron work for the Melbourne cable tramways. As an inducement to the company to establish workshops on their land, the proprietors of the Braybrook Junction Estate, C and J Johnson, gave them a grant of three acres, along with the additional area of three acres purchased by the company.

In 1888, The Mellor Brothers, farm machinery makers of South Australia, setup a company named Braybrook Implements and bought 63 acres of land to manufacture farm implements. Apart from these industries, Braybrook shire was also home to big quarries which provided employment for many.

A State School No 3113 was opened at Braybrook Junction on 30th April 1891, with Thomas Flynn as teacher. A Post and Telegraph office was opened at Hampshire Road in January 1892.

Sunshine Technical School was established on 7th October 1913. The Braybrook shire has grown with its industries and the main moto of the shire was ‘’By Industry’’.  In the early to mid-1900’s Sunshine’s development as a township was closely aligned to the growth of Sunshine Harvester Works. Sunshine Harvester works also played a key role in the landmark Harvester Judgement of 1907, which is regarded as a benchmark in Australian Labour Law.

The second Deakin Government in 1906, came up with a New Protection Policy to provide tariff protection to employers in exchange for fair and reasonable wages to employees. Two bills, The Customs Tariff Act and the Exercise Tariff Act were introduced in 1906. The Excise Tariff Act 1906 contained a provision that the excise would not be payable if the manufacturer paid “fair and reasonable” wages to employees. Though McKay’s was just one of the 112 machinery builders, who applied to the Commonwealth Court of Conciliation and Arbitration for a declaration that the wages paid to the employees by the company were fair and reasonable, his application was taken as the test case, his business being the largest.

In the landmark 1907 Harvester Judgment. Justice H.B. Higgins’ declared that a ‘fair and reasonable’ wage under the Deakin government’s New Protection legislation should answer ‘the normal needs of the average employee regarded as a human being living in a civilized community’. Arguing that the wages McKay paid his labourers were insufficient and awarded seven shillings per day and higher rates for skill. McKay successfully appealed this judgement in High Court.

Everything that happened at Sunshine Harvester effected the township of Sunshine during the early 1900s, Sunshine harvester being the largest manufacturer in Sunshine and at its peak employed more than 3000 people.

McKay was one of the first to implement the Garden City movement in Australia. McKay’s Sunshine Estate, located in the suburb of Albion, implemented the idea of a company town and town planning principles of Garden City movement. McKay also established Sunshine Gardens, now known as H.V. McKay Memorial Gardens in Sunshine.

On 16 February 1911, many workers at Sunshine Harvester Works laid down their tools demanding unionized workforce, called on McKay to dismiss non-Unionized labour. The strike ended on 16th May after the union withdrew their demand and McKay agreed to pay his employees’ wages set by Wages Board.

Like the World War I, World War II also brought in more work and income for the workforce in Sunshine though the manufacturing of war equipment, fulfilling big defense contracts. Australia’s only explosive factories were in Braybrook Shire. The Deer Park – Sunshine – Braybrook area was the center of Australia’s defense production.

The post war migration brought in demographic changes to Sunshine and its surroundings. The 1948 Malta-Australia Assisted Passage Agreement brought in many Maltese to the Sunshine area, to an extend that Sunshine and St Albans have been known as Little Malta since the 1960s.

In 1960, City of Sunshine celebrated 100 year of local Government. On 28th May 1960, a large crowd of nearly 15,000 people lined Sunshine’s main streets to watch the Centenary Parade.

Sunshine due to its proximity to Melbourne CBD is preparing itself for gentrification. It still remains a low-density residential suburb, with a bad reputation to cop with, but in recent years its median house price has skyrocketed. Many big and small industries call Sunshine home, and it is an important retail center of Melbourne with two shopping centers.

Sunshine is one of the highly multicultural suburbs of Melbourne with a significant population of Italians, Greeks, eastern Europeans and Asians.2016 Census puts Sunshine’s population at 9,768.

Harvester City. The making of multicultural Sunshine by Olwen Ford Volumes 1 and 2 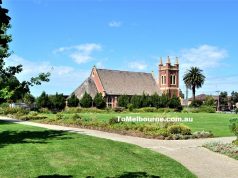