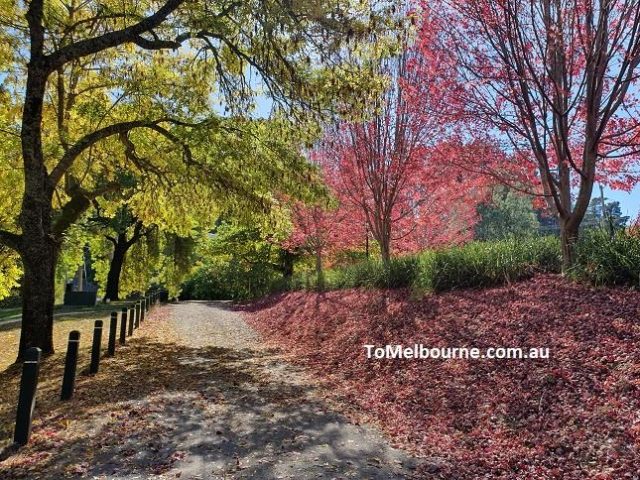 The 30-hectare Hepburn Mineral Springs Reserve is situated at the township of Hepburn Springs, 116km northwest of Melbourne CBD. This is a significant passive recreation reserve which includes a historic bathhouse, mineral springs, and public parks. The Hepburn Mineral Springs Reserve forms part of Hepburn Regional Park. The water from the mineral springs have been used for drinking and bathing for its therapeutical benefits since the 1860s.

The local Swiss – Italian population had contributed immensely to make this tourist attraction what it is today, especially in turning the surroundings to a mix of European style landscape and native bushland. Swiss Italians from Ticino in Switzerland migrated to the Daylesford area in 1854 -55 and worked at the diggings. Around 2000 Ticinese men, mostly single men came to Victoria after shipping agents advertised passage to Goldfields of Victoria and more than a 1000 of them were at Jim Crow diggings.  The Swiss- Australian influence is evident in the naming of Locarno Springs after a homestead which was in turn named after a town on the shores of Lago Maggiore in Switzerland.

The mineral springs in the area were popular since the 1860’s and this resulted in reserving .5 hectares of land as protected in 1868. The size of the reserve was gradually increased throughout the 1900s. The bores in the reserve have become named as springs. The reserve has three main springs named, Soda, Locarno and Sulphur.

Before the white settlers, aboriginal tribes called this their territory and weaved their life with their dreaming stories. The Dja Dja Wurrung people are the traditional owners of Central Victoria. Though there are no written accounts to verify, it is believed that Dja Dja Wurrung people had long known the existence of mineral springs in Wombat Forest and called it ‘’special waters’’ for its healing properties.

In the 1920’s Australian media compared Hepburn Springs to Lourdes in France, the Mecca for invalid pilgrims. The Age on 23rd April 1924 wrote, ‘’ Both Hepburn Springs and Lourdes, are patronised by many thousands of the sick and afflicted, but the raisons d’etre differ widely. In the case of Lourdes, the healing value of the water of the famous grotto is said to have been conferred by a visit from the Virgin Mary, and doubtless the faith of the pilgrims has much to do with the miracles recorded there. The Hepburn Springs, on the other band, stand upon their medicinal properties alone — no divine tradition is associated with them, and they have not yet achieved the world-wide reputation that is attached to Lourdes. Nevertheless, there is remarkable evidence that they contain constituents that are of value in the treatment of many of the ills that rack the human frame.’’

Railway came to Daylesford in 1880 and this increased the tourist inflow from Melbourne and surroundings.  The historic bathhouse was erected in 1894. A new building was added beside it in the 1920’s to accommodate further baths, then came the waiting room and boiler house. Major renovations were done in the 1980s turning this into a spa complex retaining the original bath house and the extensions of the 1920s.

The Spring Creek runs along the reserve along which the three main springs are located. The infrastructure to collect water were erected in the 1920s. Bottling of mineral water at the Hepburn Mineral Springs Reserve began in the 1880’s and in later years Hepburn Mineral Spa Company was operating the facility.  Water bottling plant at Hepburn Reserve was removed in 1986 and relocated to Daylesford.

Mining activities especially deep reef mining had significant effect in drying up mineral springs. By 1910, local citizens have noticed recognisable pattern between spring flow and mining activities. In 1912 and 1913 springs in Hepburn nearly disappeared and in July 1914, a deputation to the Minister for Mines and the Minister for Lands sought the closing of Frenchman’s Reef Mine. In early 1912, Director of Geological Survey, Dr E.J. Dunn recommended that all mines around the springs should be closed down and on January 30th, state cabinet paid the owners of the North Frenchman’s Mine £250 compensation to cease operations. The mine closed in October 1914 but mainly due to poor returns. Overall, the Government took the stance of protecting mining rights. The water flow at mineral springs gradually returned. 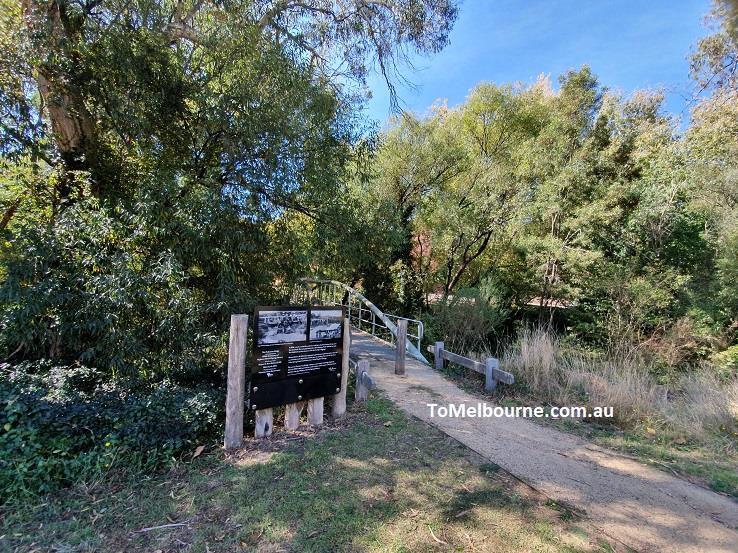 ‘’In 1854, a track crossed the creek here and lead to the Government camp on the rise ahead. The camp operated with a gold warden, Police Office and a jail. The Goldfield was then known as Mount Franklin Diggins.

Ms Buttner and Hallenstein operated a general store built from timber slabs and was located on the slope behind where you are standing. This area was the focus of the Spring Creek settlement, later named Hepburn Springs.

The current anniversary bridge replaces the rustic timber footbridge which spanned the creek to allow visitors access to the bathhouse and then into Hepburn Mineral Spring Reserve.’’

Hepburn Spring was named after Captain John Hepburn, an early pastoralist of Victoria. Hepburn established Smeaton Hill run at today’s rural town of Smeaton. The early settlers of Hepburn Springs were believed to have known the mineral springs of the region and its health-giving properties.  In December 1864, a committee including Dr Guscetti and Messrs Crippa, Lucini, Rotanzi and Hutton, among others was formed to protect the springs and promote the healing qualities.

In 1930, the Geological Survey drilled 8 bores in the Hepburn Mineral Spring Reserve. The bore construction followed a dry season and the enquiries of the Mines Department about reductions in spring flow that were experienced. Five of the bores were abandoned for various reasons and the remaining three were named – Soda, Sulphur and Wyuna and were fitted with hand pumps and were known as Mineral Springs.

The mineral waters throughout the Hepburn Springs Reserve tend towards a Sodium Bicarbonate type. The soda spring water when compared to other springs in the mineral reserve, contains the lowest levels of chloride, calcium and silica.

The Pavilion Spring is the original spring at Hepburn Mineral Springs Reserve, and it got the name from the Pavilion that was built here in the late 1800s. The spring was also known by several other names like, Main, Hepburn, Rotunda and Bottling Cellar.  In the 1860’s a circular stone and brick pit was built at the eye of the spring. The water from Pavilion Spring has soda water properties due to the presence of Sodium bicarbonate and it also contains third highest level of iron of all Victorian mineral springs.

A Sculpture “Memory of Place” an artwork in seven pieces, one bronze chair and six basalt story rocks was commissioned by the Hepburn Shire Council in September 2008 as a tribute to celebrate the history of the park. There is a story behind the sculpture – The chair tells about a local man John Howell, who used to welcome guests at the entrance of the bathhouse, open the gate and take 2 bobs for a fee and then return to his book. The nearby rock is inscribed by the word, ‘Listen’. The other five story rocks are located within the reserve to tell the visitors about some of the social events experienced in the reserve.

Today, visitors throng to Hepburn Spring Mineral Reserve to taste the mineral springs, to have picnic and for a walk. There are playgrounds for children, BBQ facility, seating, and picnic shelters. Hepburn Bath House and Spa is also popular among visitors. Pavilion Café is situated inside the reserve. To know more about Hepburn Bathhouse and spa click the link https://www.hepburnbathhouse.com