Water was precious in Shepparton in its early settlement days due to the long dry summer. As the old saying, need is the mother of all invention, a watercart to carry water was the need of the hour and the name of the inventor was John Hare Furphy.  In the pre irrigation days of Shepparton Furphy watercarts gained wide recognition. During the World War I, Australian forces used Furphy watercarts in vast numbers. They were well known field utilities for diggers. Moreover, these watercarts also supplied a slang to the Australian Vernacular. ‘’A furphy’’ is Australian slang for an erroneous or improbable story that is claimed to be factual.  To put it straight and simple, it is an Australian slang for Rumour. The generally held view of the origin of the slang is, the cart drivers brought news and gossip to the soldiers as they moved from camp to camp. In‘’The West Australian’ ’published on Thursday 14 January 1937, a man named N.E Gledhill came up with a different version in the Letter to the Editor section and that is as follows,

‘’Certainly, the word was coined from the name of the maker of a water cart. But it was not adapted as a slangism for rumour because the soldiers considered that all rumours brought into the camp came with the Furphy cart. What really happened was this. The troops had been encamped in Melbourne several weeks, speculating on their destination. Rumours were flying thickly: first they were going to France; then to Palestine; then to Egypt. In fact, everybody heard a different rumour concerning their destination. Meanwhile the Furphy water carts passed the camp every day, running up this street and down that—also without any apparent destination. The rest was simple. Rumours were flying everywhere; water carts running everywhere. And the name of the builder of the carts was Furphy! It was only a very short time before some wag decided that another name for a rumour was a Furphy, and furphy it became. The man who spread a rumour was henceforth a Furphy King.’’

John Furphy was born in 1842 to Irish migrant parents at Moonee Ponds in Melbourne. The family later moved to Kyneton. At Kyneton, John completed his apprenticeship in Blacksmithing with a firm named Hutcheson and Walker. Soon after his apprenticeship, he began his Blacksmith and Wheelwright business at Piper Street in Kyneton. In 1873, the business was moved to Shepparton as the area was opened up for closer settlements as a part of Victorian Governments irrigation programs. In 1878 John added an iron foundry to the business and began manufacturing a number of farm implements like spike rollers and double furrow ploughs. But his farm watercarts created for efficiently transporting water were what caught the attention of a nation. In 1889, the firm adopted the title of J. Furphy and Sons.

There were inscriptions on the watercart which represented the character and personality of the man behind it. A line of Pitman’s shorthand prominently cast above the tap reads: “Water is a gift of the Gods, beer is a concoction of the Devils’ — Don’t Drink Beer!”

And the motto of the firm:

till your good is better, and your better best,”

In 1925, the shorthand message was changed to read: “Water is the Gift of God but Beer and Whisky are concoctions of the Devil come and have a drink of Water.” Furphy did not want to anger the beer drinkers, so it was written in shorthand. People who did not know shorthand thought it was written in Arabic.

Furphy watercarts were manufactured from 1880 to the late 1920s. The company was one of the pioneers of electric welding in Shepparton. Apart from the watercarts the iron and brass foundry turned out large quantities of casting for standard lines of manufacture as well as castings for use in other industries such as canneries and flour mills. Furphy and Sons still function as a family business managed by the 5th generation Furphys with its base still in Shepparton. Today J. Furphy & Sons and Furphy Foundry engaged in the business of urban furniture and infrastructure, stainless steel tanks and vessels, hot dip galvanizing services and other metal fabrication. Visionaries may die but the vision lives on. 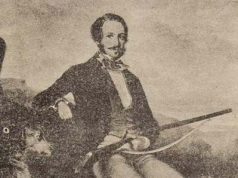 The story of Sherbourne Sheppard after whom Shepparton was named 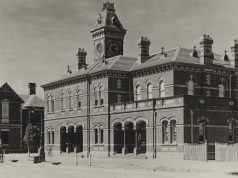