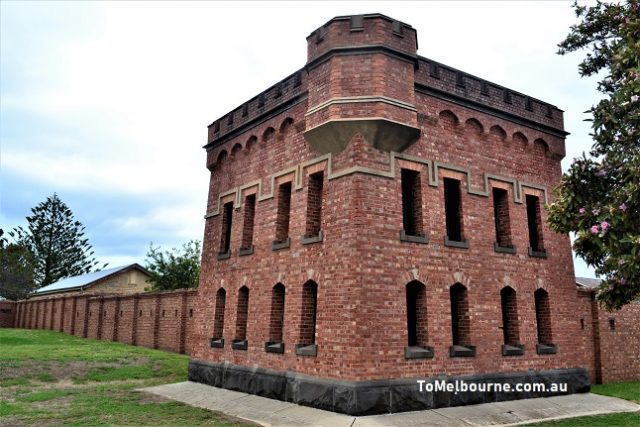 Fort Queenscliff stands on Shortland Bluff in the Borough of Queenscliffe around 105km from Melbourne. It was decided to build the fort here as it faces south to the Heads that form the narrow entrance to Por Phillip and also for its sweeping views of the shipping channels. The facility occupies an area of 6.7 hectares and has been heritage classified by the National Trust and is also included in the Register of National Estate. 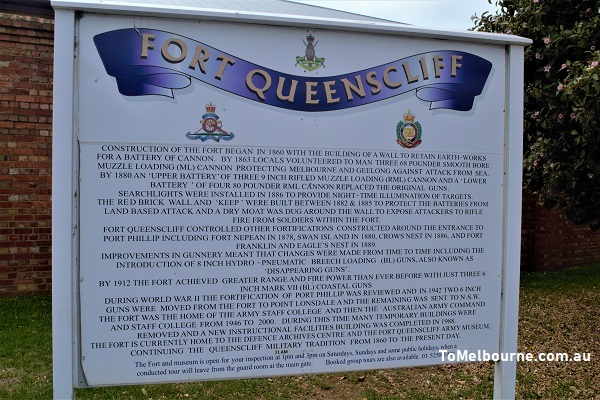 In 1851 Gold was discovered in Victoria. The newly established colony of Victoria was already known for its rich grazing lands and the discovery of Gold made it one of the most valuable colonies of British Empire. The Crimean war began in 1853 and the alliance of Ottoman Empire, France, Britain and Sardinia came into conflict with Russia. Victorians feared an imminent attack from Russia and the need to protect Victoria from an invasion became a matter of importance. In 1859, a Commission of Enquiry urged fortification of Heads. This was to include forming a volunteer artillery unit and purchasing heavy calibre cannon. The Government also applied for a battery of Royal Artillery to be stationed in Victoria. This was not approved.

Then Victorian Governor, Sir Charles Hotham in 1854 approved an Act to establish a Volunteer Corps, not exceeding 2000 people and Officers appointed by  the  Governor. In 1859, Queenscliff Volunteer Artillery Company was formed. At a time when Queenscliff had a population of only 140, more than 60 men enlisted in the volunteer Artillery. Construction of the fortifications began in 1860 and in 1863 a battery of three cannons was emplaced. Little else happened until 1882, when following Russian naval cruises in Southern Australian waters, defences of the Heads were strengthened. In the early 1880’s the nature of the defences changed from a simple artillery battery to a fort. The upper and lower batteries were constructed in 1879- 80. As protection against land-based attack between 1882 and 1886 a wall and a watchtower (Keep) were built followed by a wide gorge dug around the wall.

Today, many of Queenscliff’s oldest buildings stand inside the walls of the Fort and many of them precede the Fort itself. Apart from that, inside the Fort is the keep, a signal station, gun batteries, tunnels and underground powder magazines and Australia’s only black light house.

A telegraph tower was built in 1854. This building is the second oldest surviving in Victoria. The Octagonal timber tower built in 1888, first served as Post Office Signal station and later Light House Keeper’s store and Office.

In 1863, the first three canons were emplaced, and magazines built underground to keep the powder cartridges and shells dry and safe. Some of the magazines have been restored and now contain interesting displays. 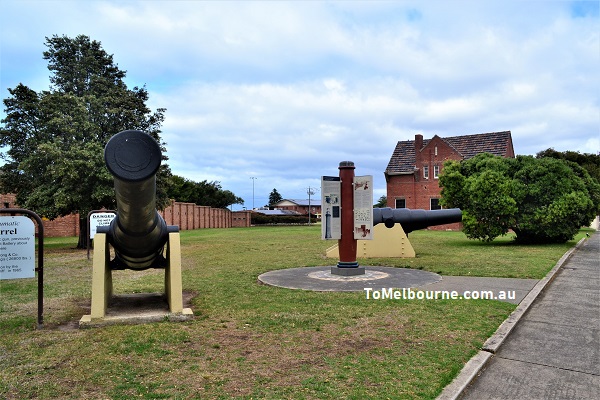 Two new light houses and keeper’s quarters were built in 1863. The Black Light house was erected near the signal station. Its basalt structure has been left unpainted, making it exceptional among Australian Light Houses.

The Keeper’s quarters built as five attached dwellings, were converted in 1889 to a military hospital.

The Queenscliff defences became a true fort in 1883, when the walls were completed protecting the battery from attack from land. Firing ports are located along the walls at regular intervals. Along the inside was a firing mound, to allow defending troops to aim from kneeling or standing position.

To slow any attacking force trying to climb the walls, a dry moat or gorge, was completed around the landward side of the Fort in 1886. This would have exposed attackers to fire from rifles and two six-pound quick firing cannon. The bridge over the gorge gave entrance to the fort through what is known as the ‘’Bridge Gate’’.

Two searchlights were installed in 1887 in the cliff face at the bottom of the bluff, to illuminate targets at night. More were placed later around the shoreline later.

Fort Queenscliff has been occupied since its construction. Members of the Australian Army Command and Staff College now using Fort are linked to the original volunteer Artillery of 1859 by their mission of national defence. The college provides selected officers from Australia and many other countries with advanced training for command and staff positions.

Command at Queenscliff passed to Victoria’s permanent army in 1883. The Royal Australian Artillery assumed control of Fort in 1901. New Guns were mounted from time to time. The fort remained basically unchanged through World War I and II although some guns were deployed to Point Lonsdale in 1942.

For Queenscliff was never attacked through sea or land. However, it had the distinction of issuing the command for the first Allied shots fired in both World War I and II.

On 5th August 1914, a warning shot was fired from Point Nepean battery at the German freighter Pfalz, stopping its attempted escape through the Heads.

In 1946 Fort Queenscliff ceased to be an active coastal artillery unit and became the home of the Australian Army Command and Staff College. 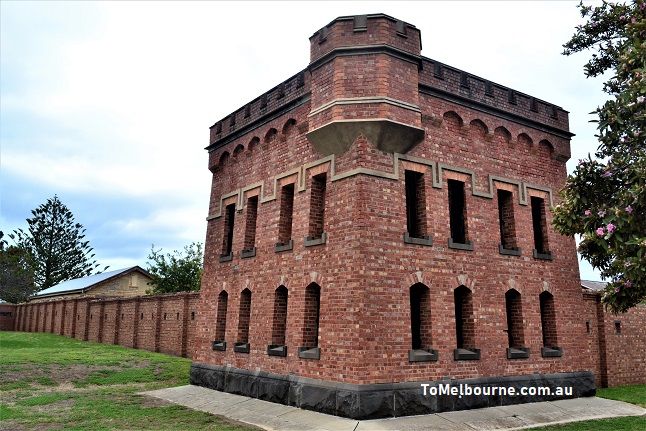 The Museum has been established by the college within the fort to protect the historic value of the site. The museum maintains the facilities, manages and extensive historic collection and conducts guided tours for public.

Tour of fort takes one to one and half hours. Photos are allowed.

The entry gates to the fort are at King Street, Queenscliff.

Photographic I D required for visitors.

No public toilets inside the Fort.