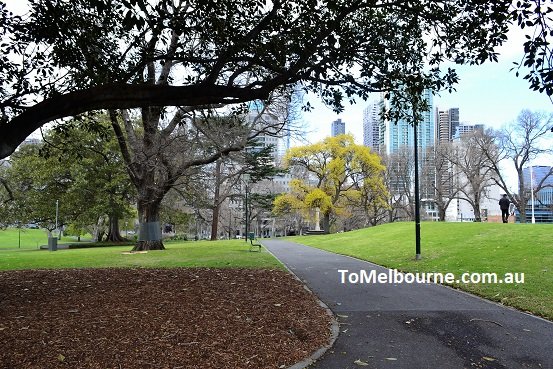 Bounded by William, La Trobe, King and Dudley streets, Flagstaff gardens is Melbourne’s oldest park. The 7.17-hectare, Flagstaff Gardens used to be a gathering place of the early European settlers for its excellent views of the Bay and the incoming ships, due to its elevated position. Compared to other major gardens in Melbourne, Flagstaff gardens always maintained an informal style, both in the design and its intended usage. Being home to the bowling club, playground and tennis courts the garden also maintained its recreational character.

The garden has variety of mature trees and well-designed flower beds. Though situated at the City centre, sleeping possums at tree hollows are a common sight here. There are many memorials and sculptures in the garden which give a glimpse of the past and the historical significance of the garden.

Most significant of the monuments is the Pioneer monument, a sandstone obelisk by Samuel Craven erected in April 1871.  This was erected to mark the burial ground of pioneer settlers. The inscription on the monument reads,” In memory of some of the earliest of the pioneers of this colony, whose remains were interred near this spot.”

“The Court favourite” bronze statue of a youth and his pet lion, sculpted by Paul Montford stands beside one of the pathways, was presented to the garden on 6th February 1930. The statue is placed on a rectangular Grey Granite pedestal with an inscription that reads, “THE COURT FAVOURITE, presented to the City of Melbourne by Cr Baron Marks JP, 1930”

Located just opposite to the Court Favourite is the Sundial, which sits on a sandstone plinth and a blue hexagonal base. The Sundial is made of Bronze.

When the state of Victoria was formed separate from NSW, the celebrations began at the Flagstaff garden and a beacon was fired. To commemorate the centenary of the separation from NSW, a monument was erected on 11th November 1950 at the garden by then Governor of Victoria, Dallas Brookes.

History of the Garden

The Original name of Flagstaff Garden was Burial Hill, being the first burial site of the early European settlers. The first settler buried here was the child of James Goodman, who died in 1836. Burials continued here until, an eight-acre land was set aside in 1838, near Elizabeth Street for a cemetery (Where the Victoria Market stands today).

A monolith to mark the burial site was erected thirty years later. Only six bodies are believed to be interred here, three men, one woman and three children but unfortunately all the adults among it met violent deaths, two of them in the hands of aborigines.

In 1840, a signalling station was established here to inform the settlers of the arrival and departure of ships at Williamstown. The practise was not continued for long as all the shipping arrival and departure information began appearing in Newspapers. A flagstaff was also erected here and since then Burial Hill came to be known as Flagstaff Hill. The flagstaff which resembled the mast of a ship was equipped with a contrivance for hoisting a black ball which was dropped each day at 1’0’ clock noon as a time signal. An octagonal building with windows in each wall was constructed to house telescopes and signalling flags. In 1858, the building was turned into a magnetic observatory. The observatory operated from there until 1863, under Professor Georg von Neumayer, a Bavarian Scientist. 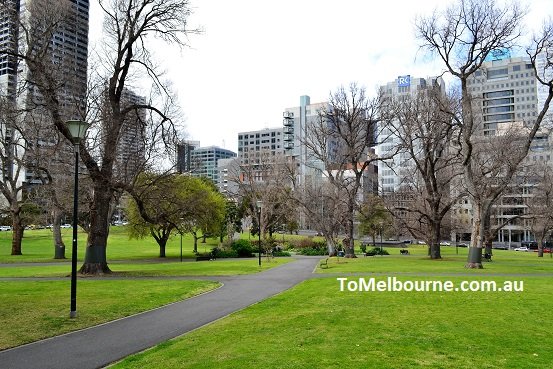 From the 1860’s the Flagstaff Hill was being developed as an ornamental garden. Design of the garden began in 1865 by Deputy Surveyor General Clement Hodgkinson in informal gadenesque style and was redesigned by John Guilfoyle in the 1890s.  In 1873, The area was reserved as a public garden.  On those days’ flagstaff garden was frequented by undesirable people at night, which became a public concern.

The Bowling facility was part of the gardens since the 1870’s and the Tennis courts were established in the 1930’s.

What you can do here: Take a walk through the park, Wedding Venue, Functions Venue, Wedding Photography, Get to know the history of the monuments in the park, Visit Melbourne’s first Church and first Cathedral St James Church just across the road. 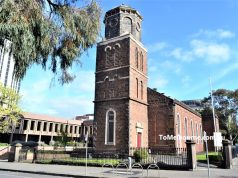