The Old England Hotel in Heidelberg was established in 1848. The hotel has undergone extensive modification in later years. The two storey wing was added in 1890. The remaining original section of the building is the second oldest building in Heidelberg. Its historical significance is not limited to the architectural identity but also due to its association with Heidelberg Impressionist School of Painters.  Artists, Arthur Streeton, Walter Withers, Tom Roberts & Charles Conder as young struggling artists, frequented the Hotel between 1888 and 1900. In the 1840’s Heidelberg was best known as a location where the upper class of Melbourne lived. The Old England Hotel was a well patronised joint in those days by people of all walks.

Hunting clubs used the hotel as a meeting point to hunt for deer and dingoes in the area.

The below image was published in Weekly Time in 1908 with the title, “HUNTING IN HEIDELBERG, MEET AT THE OLD ENGLAND HOTEL” 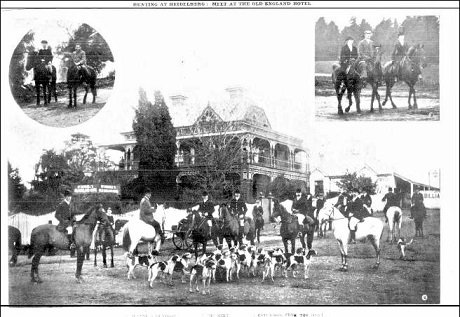 The Old England Hotel also had its dodgy days and its name appeared in local papers a few times for selling adulterated Whisky. Below is a Newspaper report appeared in the Mercury and Weekly Courier in 1898.

Mrs Marion Burton the licensee of the Old England Hotel, was charged by the Exercise department in Heidelberg Court on Monday with falsely applying Mitchell and Co’s and Watson and Son’s label to inferior Whisky.

Mr Keogh PM asked if there were any previous convictions, Exercise Officer Miller referred to two cases heard in December last year when Mrs Burton was mulct in fines and costs amounting to 5.5 pounds for having adulterated Whisky in Dewars and Watson and Son’s bottles exposed for sale.

In connection with this case we may mention that Mrs Burton endeavoured to induce the press to omit it for monetary consideration. She offered 10c to the reporter present in the court, with a request not to mention the case, but that gentleman declined to entertain. 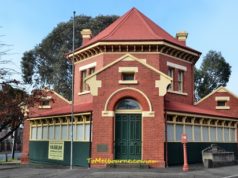 The Old Court House at Heidelberg 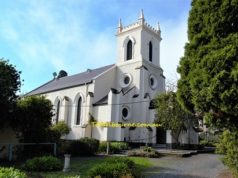 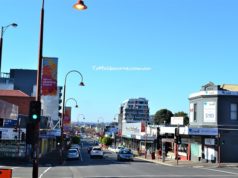