Melbourne Docklands, the inner western suburb or Melbourne, is part of lower Yarra Delta and comprises of approximately 200 hectares of land and water. Docklands is primarily waterfront area centred on the banks of the Yarra River, bordered by Wurundjeri Way and the Charles Grimes Bridge to the east, CityLink to the west and Lorimer Street to the south. Docklands is also the national headquarters of a number of major business and Government organisations, like ANZ, Medibank Private and Bureau of Meteorology. 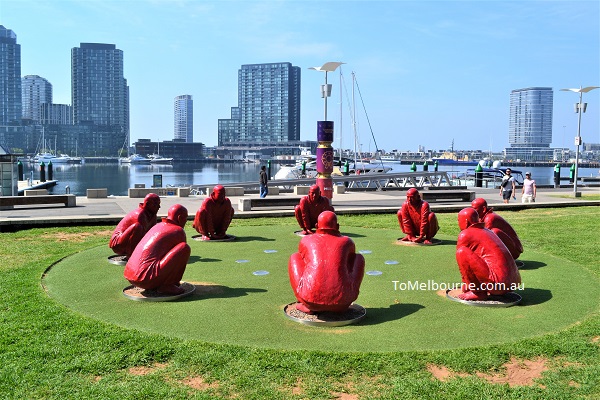 The history of Docklands

In the early days of European settlement, Yarra River was difficult to navigate for big boats near to where it joined the sea, as it was not deep enough in many places and had obstructions preventing river travel. The area what we call Docklands today, was more or less associated with the West Melbourne Swamp. On those days, Ships visiting Melbourne anchored at Hobson’s Way, which is today’s Williamstown and goods were transferred by boat up Yarra River. 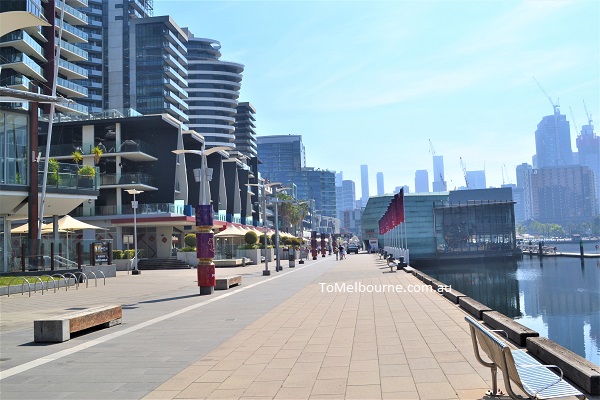 Before the Goldrush, many wharves were built along Yarra’s northern edge, both private and Government owned. A Government Dock at Batman Hill had ship repairing facilities. The first pier was built at Port Melbourne (Then known as Sandridge). The first Melbourne Gas Works (West Melbourne Gas Works) were established in today’s Docklands in 1855. The area also had an explosive magazine, abattoirs and other noxious industries and pottery works.

Melbourne Harbour trust was formed in 1877 and the trust brought Sir John Coode a distinguished English Marine Engineer to improve the port facilities in Melbourne. Coode’s plan was to have a canalised Yarra. The work on Coode Canal began in 1880 and the soil taken out by digging was used to reclaim low lying land near the riverbanks. Coode Canal was opened on 11 September 1886.

Some modifications were made to Coode’s original plan by Melbourne Harbor Trust Engineer Joseph Brady. Instead of three small docks suggested by Coode, Brady suggested one large Dock. The work on Victoria dock (Then known as West Melbourne Dock) began around this time on Coode’s suggestion to provide dock facility. A T Robb and Co were awarded the contract for £117,000, for excavation. The soil excavated was used to reclaim low lying areas.

On 22 March 1892, the Governor of Victoria, the Earl of Hopetoun, formally opened the West Melbourne Dock. In 1893, the name of the dock was changed from West Melbourne Dock to Victoria Dock. When it was constructed, Victoria Dock was the second largest single dock in the world, after Cavendish Dock, Barrow-in-Furness, Cumbria, England. Victoria Dock grew busier and busier and was handling 90% of Victoria’s imports which demanded expansion of existing facilities.  Central Pier was also constructed later, in 1917.

In 1975, Charles Grimes Bridge was constructed. From 1960’s onwards containerised cargo became the norm in freight transport, and it required a different type of storage to the long sheds. New docks and transport infrastructure were built west of Victoria Dock in the 1970’s. As a result, by the  1980’s Docklands gradually fell into disrepair and disuse as port activity continues to relocate west. 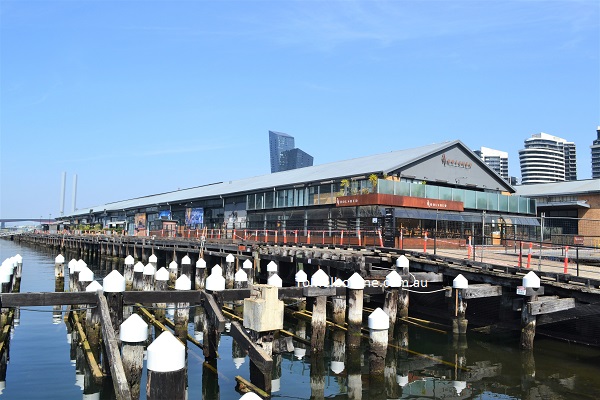 At around the same time steam powered trains were replaced by diesel powered trains, which meant, the nearby railway yard facilities were also getting redundant. The docks were not required for coal storage and the large steam locomotive sheds were also no longer required.

In 1989 the Victorian Government released ‘Melbourne’s Docklands: A Strategic Planning Framework’ for public consultation and in 1990 Docklands task force was established.

Victoria Dock and the surrounding areas were under the responsibility of Port of Melbourne until 1990 and the adjoining railway yards and its infrastructure the responsibility of Victorian Railway Department. After the Docklands Authority Act was passed in 1991, Docklands Authority came into existence, to facilitate private sector development of Docklands and was responsible for the municipal management of Docklands. The construction of Marvel Stadium (previously known as Etihad Stadium) began in 1997. 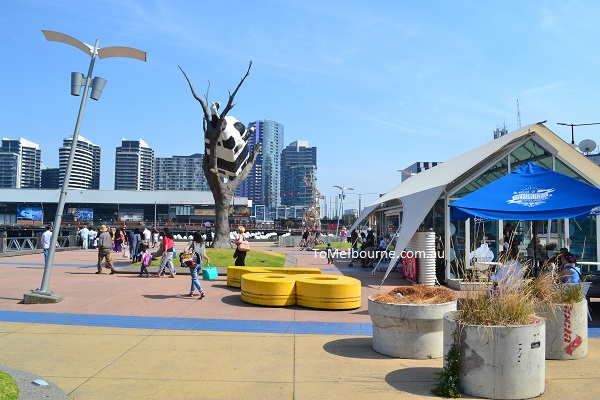 In 2003, Docklands Authority merged with Urban and Regional Land corporation to become VicUrban.  In 2011, the name was changed to Places Victoria. In April 2017, Places Victoria combined with Major Projects Victoria to form Development Victoria.

Development Victoria is now responsible establishing partnerships with private developers, City of Melbourne and the State Government to coordinate the development of Docklands.

Port of Melbourne is still responsible for the remainder of the operating port area. In 2007, the municipal management of Docklands was transferred to City of Melbourne. The development at New Quay, includes apartments, restaurants and marina. The first residential development was completed in 2001.  Today Docklands is Melbourne’s waterfront precinct offering a mix of inner city living, shopping, business, parks, entertainment, dining, sporting events, community events, arts and culture. In 2004, Collins Street Bridge was opened extending Collin Street to Docklands and by 2005, tramlines were extended to north west Docklands. In 2017 ministerial approval was given to proceed with plans to create a new waterfront residential neighbourhood in Victoria Harbour.

But Docklands growth as a residential estate was not without teething problems. Though the residential estates of Docklands were originally meant to become lifestyle destination of inner-city professionals, it gradually became popular joint for illegal sex workers, gangland figures and drug dealers. Many of its apartments were turned into illegal high-rise rooming houses by greedy landlords by squeezing ten to fifteen students into small apartments.

Today, Docklands is a tourist attraction as well as the most photogenic place in Melbourne’s CBD with its public art works and the waters of Yarra and yachts. An app named “Harbourside Docklands Art Trail app” was designed by Development Victoria to help visitors explore the public art works at Docklands Precinct. 2016 Census reveals Docklands had a population of 10,964. Another star attraction at Docklands is the Melbourne Star wheel, which is Southern Hemisphere’s only giant observation wheel. The wheel offers viewing pleasure of up to 40km from Melbourne’s CBD and Port Phillip through to Mount Macedon and the Dandenong Ranges in the distance.

Docklands is broken up into a number of precincts and is developed by different development companies.

The Batman’s Hill precinct, bordered by the Yarra River to the south, Spencer Street to the east, Docklands Stadium to the north and Victoria Harbour to the west is a mixed use precinct. Collins Square, a 2-hectare site of which the historic Rails Goods shed No2 is a part of lies within the Batman Hill precinct and is developed by Walker Corporation. Collins Square was completed in 2018.

Digital Harbour is a waterfront area getting developed to include commercial, residential, SOHO units and retail space. The precinct is a destination for IT, Media and other related businesses

The Victoria Harbour Precinct is the centrepiece of Docklands which includes a proposed extension of Collins Street and Bourke Street to meet at the water’s edge.  It has 3.7km of waterfront which comprises residential apartments, commercial office space, retail space, community facilities and public spaces. ANZ headquarters is also situated here.

NewQuay has both residential and commercial developments

Yarra’s Edge situated south of Yarra river is a residential precinct. It has three sections namely, The Marina Precinct, The Park Precinct and The River Precinct. Webb Bridge designed by Denton Corker Marshall and Robert Owen, forms cycling and pedestrian link to the main part of Docklands, through Docklands Park. 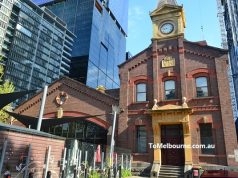 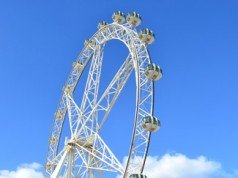