Australian Supermarket Coles, currently owned by parent company Westfarmers, has a proud history of more than 100 years and is credited with bringing the supermarket culture to Australia. Today Coles operates more than 800 stores across Australia and employs over 100,000 people. But it all began with founder George James (G J) Coles, “Coles Variety Store” in Smith Street, Collingwood.

G.J. Coles learned the tricks of the trade working at his father’s “Coles Store business” at Wilmot, Tasmania from 1910 to 1913. Wilmot business was operating as “The Original Coles” until it was destroyed by fire on 24th January 2014. George Coles having visited retail stores in US and Britain modelled his first store based on the American Model.

G.J. Coles and his brother James, opened the ‘Coles Variety Store’ on 9 April 1914 on Smith Street at Collingwood in Melbourne with a capital of £2000. In 1958, Coles acquired 54 John Connell Dickins grocery stores, in 1959 – Beilby’s chain in South Australia and in 1960 – Matthews Thompson grocery stores in New South Wales. Coles expanded through acquisitions.

Coles opened his first and second stores in Collingwood in 1914 and 1919. The first shop employed 6 people with a tagline nothing over a shilling. It was a new dawn in retailing as the shop displayed merchandise for customers to see and handle without any obligations to buy. In 2014 Coles opened a new Smith Street store, at the site of its second store, less than one kilometre from where the first store stood. 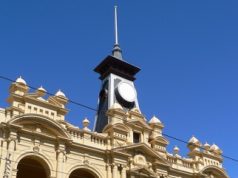