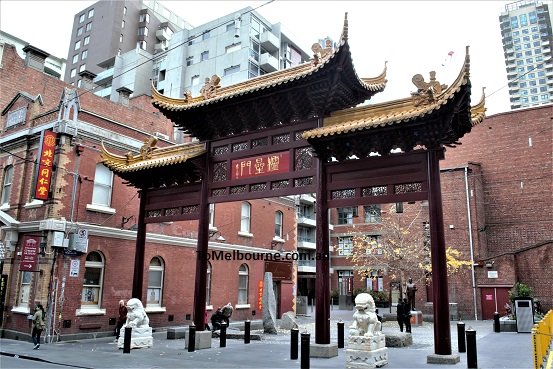 Melbourne’s Chinatown dates back to the Gold rush years of Victoria of the 1850’s. In its early years of existence, it was considered as a fearful slum of vices by the European settlers of Melbourne.  After the discovery of Gold in Victoria, Chinese fortune seekers began arriving in Melbourne en route to the Gold towns of Victoria. By 1859, Chinese population in Victoria was 8.5% of the Total population.  In those days, Chinatown served as a temporary staging post for a Chinese migrant’s journey to the Goldfields, providing cheap accommodation and supplies. In the early years’ majority of the Chinese arrived were from the southern province of Guangdong in China. Soon Chinatown became a centre for   illegal activities with its Gambling houses, opium shops, and brothels. The Chinese were considered as a very undesirable race as migrants and the Chinatown where the largest concentration existed has to bear it all. 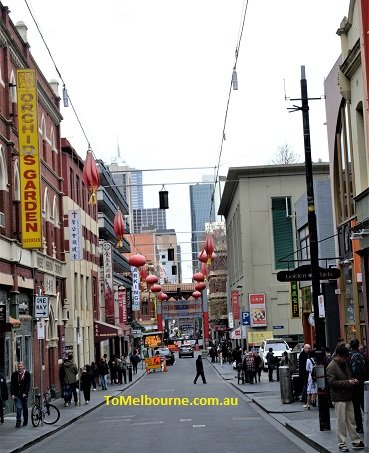 In the eyes of the white population, the Chinese were squint-eyed, yellow-skinned, malodorous, immoral, thievish, pot-bellied crowd of rat-eating, paganist, stinking lepers. A report published by Sydney Daily Telegraph on 11th June 1881, warns about the perils of allowing Chinatowns to mushroom in Australia. “In every city these Asiatics get a foothold, they appropriate a certain portion of it. There is a Chinatown in Melbourne, a Canton in Ballarat a Hong Kong in Wellington and a Chinese quarter in Sydney. In all these, bulk of Chinese refuse to conform to the manners of Europeans. They outrage our sanitary laws and they live in a manner and after a fashion that should not be allowed. True to those hereditary instincts, which held them to keep for so many years, China for Chinese, against the trading inroads and visits of people, who in all the pride of ignorance, they used to term “barbarians”, they isolate themselves as far as possible, always after the same objectionable rule, and follow the same nasty precedents. They will be unclean to the end of the chapter, just as if it was their nature so to be.” 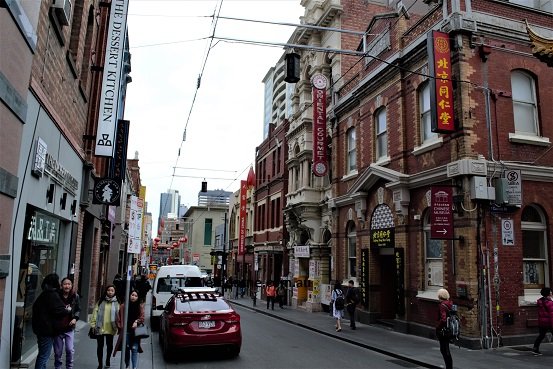 Assimilation was even more difficult for Chinese in an unwelcoming land where language barriers and cultural differences created a big hurdle. The provision of Lodging houses with low rents and the availability of essential commodities tailored for the requirements of the Chinese Community, helped form an enclave here, from the beginning itself.

Melbourne Authorities always feared that Melbourne’s Chinatown may sink into the lawlessness of infamous San Francisco Chinatown in America. But took solace in the fact that the Chinese settled in Melbourne have never been in sufficient numbers to enable them to assume an aggressive attitude in any direction. Police in part attributed their timidity as sojourners in a strange land.

The opium smoking habits of the Chinese were looked down by Melburnians so was their addiction to gambling.” Chinese, the most industrious race, will work 18 hours a day to save a few shillings to speculate with at the gaming table”, reported Argus, the Melbourne Newspaper in 1870.

Chinese had a small Parliament of their own held in a substantial and well-furnished two storey building, near the corner of little Bourke and Swanston Streets. Members elected to represent the Community met in the hall to discuss matters of self-government or measures taken against the Chinese by the Police.

By design the Chinatown offered great facilities for concealment of criminals. Both uniformed and plain clothed police have concentrated a good deal of attention on this locality due to this.

As Gold rush prosperity waned, Chinese migrants in Gold rush towns started flowing back to Melbourne. The Chinese started establishing themselves as storekeepers, importers, furniture-makers, herbalists and merchants in Melbourne. Chinatown remained as a place of get together for gambling, clan meeting or religious ceremonies. Closer to the 1880’s Chinatown had transformed itself as a furniture production hub. With their cheap labour and workmanship, there were more than enough buyers for the Chinese furniture in Melbourne. White Australian furniture makers lobbied the Government to protect their interests and in 1886, Victorian Government enacted The Factories and Shops Act, which made it compulsory to stamp details of manufacturers on the products.

During this time Chinese were also establishing themselves as fruit merchants. Chinese fruit wholesalers boomed in Little Bourke Street. The Chinatown part of the Little Bourke Street has wielded its influence as a banana wholesaling hub until the 1930s.

On 1st January 1901, Australia became a Federation. Unaware of the impending danger, the Chinese Australians were also very much excited about the possibilities of Australia’s Federation and hoped that they would become Australian Citizens of Chinese Origin. As a part of the celebrations of opening the First Federal Parliament in Melbourne, to welcome the Duke and Dutches of Cornwall and York, the Chinese Community raised £800 for the construction of a ‘Chinese Citizens Arch’, one of eight celebratory archways that were erected along Swanston Street. According to the “Australian Star” in 1901, The arch was built in Pagoda style in strict conformity with Celestial ideas of Architecture. It stretched completely across the thoroughfare at the intersection of Swanston and Little Bourke Street. Over the centre of the main span was a band house, where Chinese musicians will discourse sweet music – according to eastern ideas of harmony. The two planking towers are to be filled on each fete day with gorgeously attired Chinese. Across the arch was a weird and awful looking dragon. The whole structure was decked with rich silks, bells and symbols dear to the Chinese heart.

Soon Australia adopted the White Australia Policy. 1901’s Immigration Restriction Act, discriminated and discouraged non- European Immigration to Australia which has considerably reduced Chinese migration to Victoria. Under the White Australia Policy, Chinese population in Victoria has reduced from 25,000 in 1861 to 2000 in 1930. Chinese influence and businesses in China town visibly spiraled down in those years. The manufacturing units, wholesale businesses and homes were replaced by Chinese Cafes and Restaurants. Though Chinese Restaurants had a poor reputation for hygiene standards, bohemians and the young university students started frequenting Chinese restaurants in the 30’s and the trend was picked up by the mainstream soon.

With the closure of many Chinese owned businesses in the 40’s and 50’s, it was even feared that the Chinatown may a disappear altogether. In the 50’s and 60’s Major Department Stores like Myer and David Johns expanded their stores by taking up the whole block to Little Bourke Street. 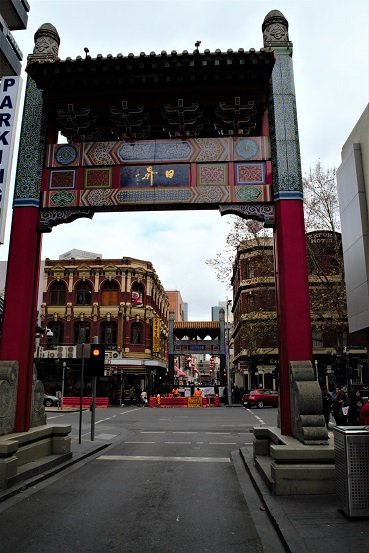 Restrictions on Chinese immigration was loosened in 1930’s enabling Chinese Chef’s to enter Australia under a Certificate of Exception from the Dictation Test. The Immigration Restriction Act was repealed in 1958 and the Chinese Population in Victoria started picking up again. But the New immigrants started settling all over Melbourne though Chinatown was still remained popular for their meetups.

By the end of the 1960’s, with an eye on tourist dollars, suggestions were made to the Victorian Government to revitalise Chinatown and preserve its character. In 1976 as a part of the revitalization scheme, four Chinese arches were suspended across Little Bourke Street facing Swanston Street and Exhibition Street to define the entrances of the Precinct. Archways at Swanston, Russell and Exhibition Streets were the brainchild of Melbourne City Councillor, David Wang.

A Chinatown Action Plan was released by the Victorian Tourism Commission and Melbourne City Council in 1985 which provided guidelines for beautification and maintenance of the precincts character. The four suspended arches were converted to free standing gateways.

Today Chinatown is a popular tourist destination in Melbourne famous for its Chinese restaurants and heritage listed buildings. Chinatown is home to Chinese Museum which displays the longest dragon in the world and the best place to explore Chinese history in Australia. The best time to visit Chinatown is during the Chinese festival, when people throng the streets to watch Chinese festivities.

To know more about Chinatown in Melbourne visit the link https://chinatownmelbourne.com.au/