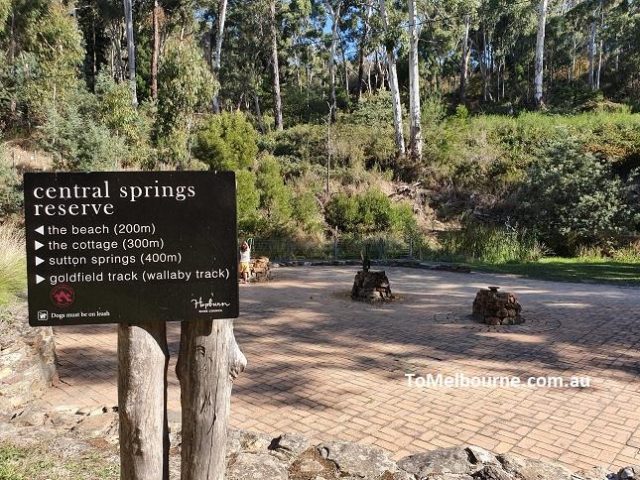 Daylesford, better known as the Spa Country, is located approximately 109km northwest of Melbourne CBD. The region including Hepburn Springs is a popular tourist destination since the 1900’s for its natural spring mineral spas and is famous for its effervescent mineral water reserve.

In the 1860’s Daylesford was considered as a rich gold mining and farming district. With the decline of gold mining, greater emphasis was placed on the development of mineral springs to attract tourists. Mineral Springs are either highly mineralised with salts common in ground water of the region or contain uncommon salts. Overwhelming majority of Victoria’s Mineral Springs are located within 50km radius of Daylesford – Hepburn Springs area.

The Central Springs Reserve is part of the 72hectare Daylesford Lake Reserve, located southwest of Lake Daylesford in the Wombat Creek valley. Hard Hills, Sutton and Wagga Springs are dotted along the Creek sidewalk. The Shire of Hepburn is the appointed Committee of Management for the whole of the Reserve, under the Crown land Reserves Act 1978.

The Central Mineral Springs is the first of the four mineral springs extending downstream along the valley of Wombat Creek below Lake Daylesford. Wombat Flat Springs is a new entrant in the block.

Hard Hills Spring trench has steps at both ends providing access to two pipes and sump at the bottom of the trench. Wagga Spring is a semi-circular concrete pit and steps were constructed above the spring eye in the 1950s. Wombat Flat spring was drilled and tapped in 2004. The Sutton Springs were originally developed by Sutton family for their private use. William Sutton and his son discovered this mineral spring in 1895, while gold mining in Table Hill.

The idea for a Lake Daylesford was first mooted in mid-1880’s and Lake Daylesford became a reality in 1930. In 1932 the various reservations associated with the Lake Daylesford area were consolidated into a reserve for “Mineral Springs and Ornamental Lake and for Recreation Convenience and Amusement of the People”. The Central Springs area which later became Central Springs Reserve was popular for a range of passive recreational activities even before the 1920’s. There existed a timber rotunda which was later relocated to Wombat Hill Botanic Gardens and facilities for picnic and strolling. Mineral Springs in the Hepburn area were popular with the public since the 1860’s or even before.  The presence of mineral springs in the Central Springs Reserve area were first reported in 1893. The three existing Central Mineral Springs were formalised with bores and hand pumps during the late 1920’s.

‘’In pursuing their avocations in Daylesford in the early days the miners laid bare a number of mineral springs which, after a short time, were again buried under heaps of mining debris. The Daylesford Borough Council has recently taken steps to open up some of these, which are situated close to the town, and forwarded samples of the of the water to Mr. Kruse, the well-known analytical chemist, of Collins-street west, for analysis and report. The temperature of the water when the samples were taken was 65 degrees to 68 degrees Fahrenheit while in the open air the temperature was 100. The carbonates of magnesium, calcium, and iron are kept in solution by the large, amount of free carbonic acid gas, which causes a constant bubbling by its escape. The liberation of the gas from these carbonates being present in considerable quantities causes a brisk effervescence when the water is mixed with lemon syrup or raspberry vinegar. The waters may be classed as “alkaline chalybeate. and are of great in diseases of the stomach and kidneys, pneumonia, tuberculosis, scarlet fever, gout, typhoid, and chlorosis. In pulmonary affections the water would be of great advantage taken with hot milk, while with the audition of wine they would form a grateful tonic. These springs will when better known become very valuable.’’

The Central Springs being part of the broader Lake Daylesford Reserve is closely connected to network of trails. The Lake Daylesford Perimeter trail leads to Central Springs from the east, from Lake Wall. This trail leads along the northern bank of the Wombat Creek to Sutton Springs. From Sutton Springs it divides; one leading to Hepburn Regional Park and Twin Bridges, whereas the other trail forms a circuit back to Central Springs via southern creek bank. The 210 km Goldfield track passes along these mineral springs.

Several bores were sunk near Hard Hill and Sutton Spring to source extra mineral water deeper underground. Hand pumps were fitted to extract the water and to provide multiple outlets for the growing number of visitors. Government grants and local funds combined to employ many unemployed workers during the depression years to build many of the stone walls and landscape improvements.

There are many information boards erected at the site describing the history of the locality. To conclude this article, we quote from one of those info boards. ‘’A.P. Christensen had been mining in the area for many years and he built an embarkment by hand across Wombat Creek just east of Sutton Spring to provide swimming pool for locals and visitors. It was later used for fishing purposes and was demolished in 1931. He had many unfulfilled grand plans for the area including hot mineral baths, hydro power generation and an electric passenger tramway network. ‘’

It is always interesting to be reminded that every stretch of earth we walk, carry millions of years of history, and if we care to listen got millions of stories to tell us. We learn from history and we contribute to it too.