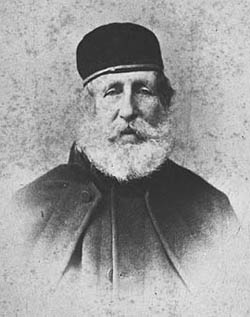 Captain Wilbraham Frederick Evelyn Liardet is among the few pioneer settlers of Melbourne who etched their names in the history of the land by special acts of public service. In the 1840’s Port Melbourne had the official name ‘Sandridge’ but was commonly known as ‘Liardet’s Beach’.

Liardet was born in England in 1799 in a family that had Swiss origin. In 1821 he married his cousin Carolina Frederica.  Liardet joined the Navy and became a Luitenant in 1825 and in 1826 he retired on half pay. By the age of 40, Liardet had 11 children, nine of which survived and that was when he decided to migrate to Australia. Liardet, his wife and their children arrived in Port Phillip in Ship, William Metcalf which sailed from Plymouth Harbour on 26 July 1839 and reached Port Phillip after 113 days, on 15 Nov 1839. The ship was chartered by J.B.Were, who later became a prominent business man in Melbourne.

Liardet’s original intention was to settle in NSW. The ship remained anchored in Hobsons Bay for around 3 weeks before leaving for Sydney. A glance at the young settlement of Melbourne, then only 4 years old, Liardet was so impressed that he left his family on the foreshores of the present site of Port Melbourne and hurried a visit to Sydney with one of his sons.  Liadet family brought with them specially made tents from London. They erected their tents in a less frequented beach area where their only neighbours were two fishermen named Davis and Storey. When Liardet returned from Sydney they refuse to help disembark his goods from the ship.  So Liardet had no choice but to purchase a whale boat from the Captain of Metcalfe.

With this Whale boat he carried mail ashore from ships and by August 1840, it has become full fletched and he was running a ‘mail cart’ to and from the town three times daily. In October 1840, he erected Brighton Pier Hotel in Port Melbourne. In 1841 he transferred his hotel license to his son and he was insolvent by 1845. Liardet’s daughter was later quoted as saying, “ My father had no idea of business and my mother had no idea of housekeeping”. By the end of 1840’s Liardet had achieved some financial stability. He had added stables to the hotel, built a bath house, and constructed stock yards in the beach.  The hotel was registered back to his name by the 1850’s and later was sold. After selling his hotel, Liardet went to England and when he came back, brought with him a consignment of machinery for use in the Goldfields. In 1853, he prepared a proposal for the formation of a company to supply water for the southern suburbs of Melbourne.   His children prospered as Gold was discovered in Victoria and some of them became hoteliers.

Liardet and their children considered themselves as amphibious animals for their skills in water. The family had saved at least 42 drowning people in the area. Liadet provided most of his services free of charge. The ships that anchored in Port Melbourne used water from Liardet’s well free of charge to replenish their water caskets. He also promoted rowing, archery and horse racing. Liardet was a man of big ideas most of which never came to fruition.

Liardet was described as a man of culture and good birth who pressed by circumstances to earn a living by the labour of his hands. But he is still remembered for the paintings he made in his spare time. His paintings throw light on the period he lived. In the 1870’s he was busy preparing for the publication of the History of Victoria for which he had prepared 40 water colour sketches of the scenes of early Melbourne from his recollection. But he could not complete the project. He returned to Newzealand by the end of 1877, where he lived few years with his children before. He died a few months later on 21st March 1878.

As an early immigrant to Australia, Liardet had made many contributions to the settler community of Melbourne of the 1800’s. Liardet, the visionary first sensed the need for a coastal and harbour defence policy and supplied a defence scheme to the authorities in 1840. Liardet and sons made extensive experiments with various building materials and were responsible for the establishment of many of the early brickworks and quarries. He temporarily housed many of the early settlers. Wilbraham Frederick Evelyn Liardet, Father of Port Melbourne was a great citizen, a great statesman, and one of Australia’s greatest pioneers.