The township of Redesdale is situated 120 kilometres north-west of Melbourne and 45 kilometres south-east of Bendigo in the City of Greater Bendigo local government area. Redesdale was named after Captain Robert William Rede. Rede was in charge of both civilian police and militia enforcing the unpopular tax enforced on miners which resulted in Eureka Rebellion. He later became Sheriff of Melbourne. The growth of the township began after the McIvor Gold discovery as a service centre for diggers enroute to Goldfields. The township also had a strong agricultural base.

Major Thomas Mitchell passed through Redesdale in 1836 on his exploration of Australia Felix. There is a historical marker at Redesdale which reads, ‘’Major Thomas Mitchell passed this way in 1836. Commemorative Trek in his honour October 4, 1986. Plaque unveiled by Professor Geoffrey Blainey ‘’. Campaspe river passes through Redesdale and the river was named so by Major Thomas Mitchell after the Macedonian conqueror Alexander’s mistress Campaspe. Folklore says Campaspe was painted by Apelles, greatest of the painters of western world at that time. Seeing Apelles love for Campaspe, Alexander gave his mistress to Apelles and kept the portrait painted by him. Unlike the namesake Campaspe river still flows bringing prosperity to the land it flows through. 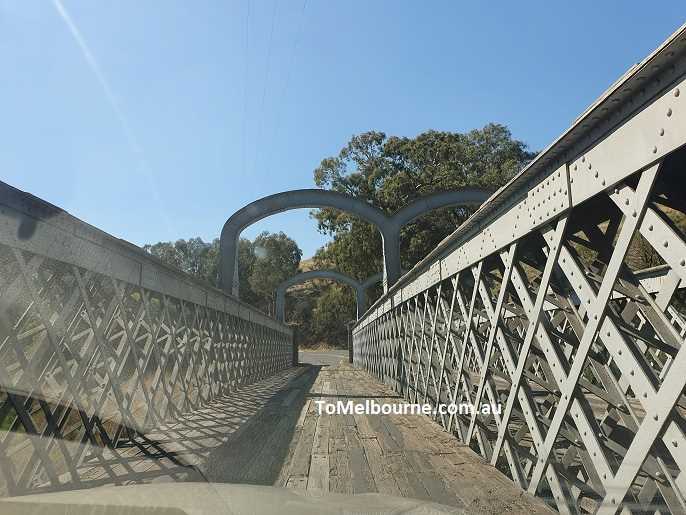 Soon after Mitchells journey of exploration squatters and overlanders taken up the area under annual licenses. Henry Monro’s Campase Run was spread over 20,000 hectares. 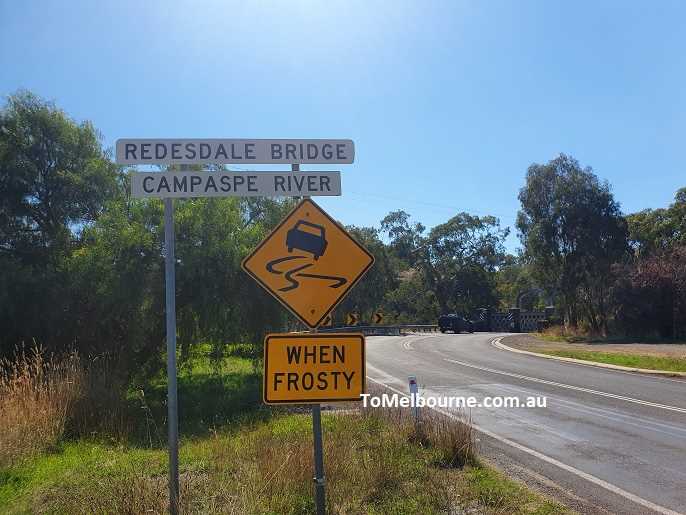 McIvor Goldrush began in 1852. The Redesdale Hotel located at 2640 Kyneton- Redesdale Road was established in 1855. In 1876 bluestone extensions were added to the hotel. Until 1891, the hotel was Cobb and Co coach stop and the Cobb and Co stables still exists. The hotel changed a few hands and in 2018 it was sold again.

The sale of the first township blocks began in 1871 and township was gazetted in December 1881. In 1891, a branch railway line was built which connected with the main Bendigo line and Redesdale was the terminus between Kyneton and Malmsbury. The line was opened on 15th January 1891 and closed on 29th June 1954. 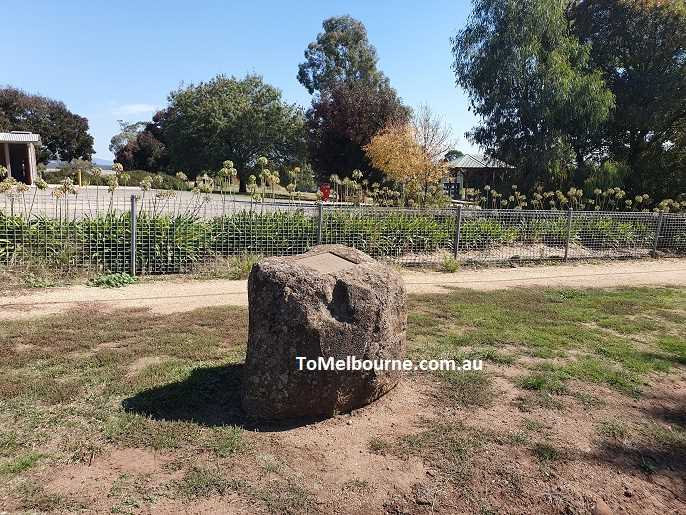 Redesdale Bridge which crosses the Campaspe river was at the border between the Shire of Metcalfe and Shire of McIvor. Discussions about the proposal to build a bridge across the river in order to provide mail route and carriage way for stock, Gold and diggers began in August 1866 between the two shires at Mia Mia Hotel. The engineer of Metcalfe, Mr T.B.Muntz produced two designs one of a timber bridge and the other of an iron girder bridge. Contractor Thomas Doran of Castlemaine was awarded the contract to build the Iron girder bridge which was cheaper to build.

The girders used for the bridge belonged to a bridge intended to be built across Yarra in Hawthorn. For the Hawthorn Bridge wrought iron truss components were ordered from England. The Vessel named ‘’ Herald of the Morning’’ which carried the bridge parts caught fire at Hobsons Bay in 1859 before the cargo was discharged and it was consequently scuttled and sunk. A firm named Ingles, Adams, and Gresham, of Sandridge, successfully raised the bridge parts from the sea and transported it to Port Melbourne. The company entered into negotiations with the Government to purchase it from them. Unfortunately, during the negotiations, the firm tried to bribe by offering then Inspector General of Public works, Thomas Higginbotham with 2.5% commission for the deal. This led to the breaking of the deal and the removal of Ingles, Adams, and Gresham from the list of Government contractors. The bridge material weight around 350 tons along with the erection cranes came with it. Original cost of the bridge before it was sunk was £10,000. The retrieved material which was estimated to be worth around £6000 was later purchased by Langlands and Co for £2000. A portion of it weighing 200 tons were sold for the construction of Redesdale Bridge for £1000. Even Langlands and Co didn’t make any profit from the deal as they had to sell the remainder for the price of scrap iron. But Metcalf and McIvor Shires who were constructing the bridge got the material for only a fraction of its original cost. The total cost for the bridge came around £6000. Technical Advisor with Railways Department Mr Ford inspected the girders and okayed it. The girders were transported from Port Melbourne in Bullock Dray and they were scraped and oiled at site.

The bridge was required to be completed in 1867 but it got delayed as the rivets furnished by Langlands and Co were unsuited to the work and they agreed to reissue suitable rivets at half price. Mr Muntz, requested Thomas Higginbotham to inspect the bridge and certify before opening to public but Thomas Higginbotham refused. In 1867, Higginbotham reported that many of the plates are bent and have been damaged by seawater. Under these circumstances, the usual calculations for arriving at the strength of the girders cannot be relied upon. So the Roads and Bridges Department should not consent to allow the bridge to be used by public, until it has been thoroughly tested.

Finally, the bridge was opened to public on Thursday 23rd January 1868. Horses and carriages lined the road for very long distance. Mrs J.B. Morris, the lady of the Ex-President of McIvor Shire broke a bottle of Champaign on one of the granite ties and christened the structure, ‘’The Redesdale Bridge’’.

MEETING OF CAMPASPE BRIDGE CONFERENCE AT THE BRIDGE.