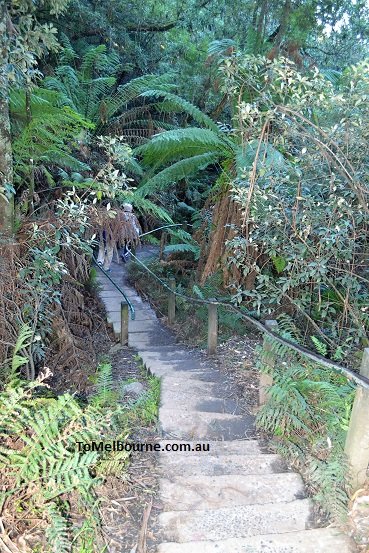 1000 steps Kakoda Memorial Track is the best place to test one’s stamina in Melbourne. Kakoda Memorial Track starts at Ferntree Gully Rangers Office and ends at One Tree Hill Picnic Ground.  Created in the early 1900’s, 1000 steps were originally made from tree fern trunks to make the climb a little easier. They were replaced by wooden palings later and in 1950 concrete steps were made. Its steep terrain requires a reasonable level of fitness to conquer. 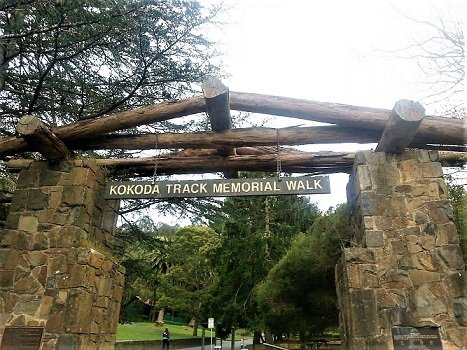 There are only 776 steps though it is called thousand steps which represent the “Golden Staircase” a name given by Australian soldiers to the 2000 steps cut by the Australian Army into the track between Uberi and Imita Ridge in Papua New Guinea. 14 plaques are installed at the Kakoda track which regale the story of Australian military personnel who fought and died on the Kakoda track in Papua. In 1998 the Victoria veterans from the Kokoda campaign adopted this park as their memorial and changed the name of the walk to the Kokoda Track Memorial Walk, incorporating the 1000 Steps to reflect this. Kakoda track Memorial walk is around 3km and will take around 2 hours to return.

Once at the top, one can take the Lyrebird track for returning or continue along to the One Tree Hill. These tracks are usually busy on weekends especially on summer weekends.

Kokoda Memorial wall is erected to honour the 624 men who fell in the initial onslaught of the Kokoda Campaign.

Other walks nearby or connected to this are

This run parallel to the Kakoda Track Memorial walk and is just as challenging. The bluestone steps are designed with the input of sports scientist Dick Telford to allow variety of stride length to reduce fatigue. This is a 3km and will take around 1.5 hours to return.

Take Belgrave line train and descend at Upper Ferntree Gully Station, walk along Burwood highway and the Park entrance is 1km away near the intersection with Mount Dandenong Tourist Road.

Opening Hours: The gates to Ferntree Gully Picnic Ground are open 6am and 9pm.